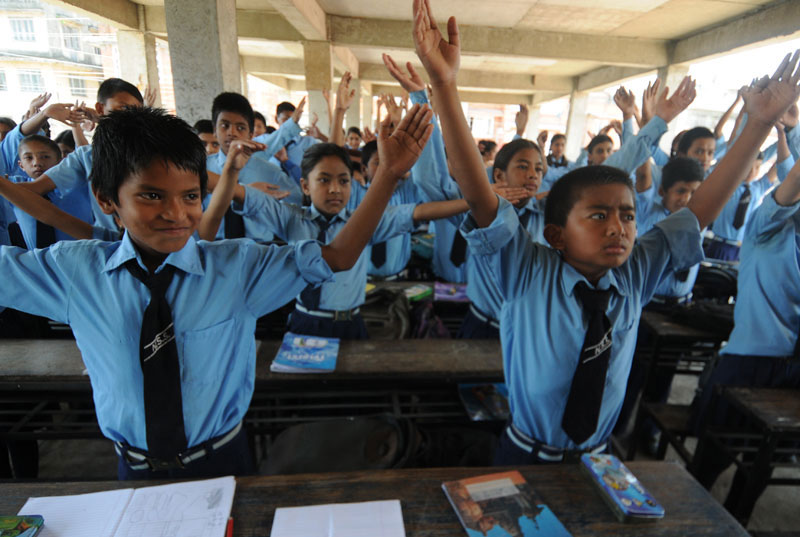 Political parties compete for top school posts so that they get to use school budgets as they like
During a recent visit to my home district of Udayapur, Shree Janata Higher Secondary School of Jahada was in process of forming a new School Management Committee (SMC), as per newly introduced Education Act. But the school had failed to find a consensus candidate as the committee chairperson.

Both the candidates who claimed the coveted post were from CPN-UML. But they belong to different factions in the party: one to KP Sharma Oli, the other to Madhav Kumar Nepal camp. Both factions have strong influence at the local level—Oli as party chief and Nepal as someone who led the party for 15 years. Both have become prime ministers after the 2007 political change.

The election of SMC was disrupted as there was no Congress representative, even though the organizer claimed that its area chairperson had been invited. The next day, this Congress leader chided the school principal for letting UML dominate the program.

When I asked when they would resolve the dispute, one candidate said “high command” (of the party) was working on it. The one the ‘high command’ approves will become the SMC head.

A political party interferes not because it is serious about the future of students or wants to improve school education system. Parties wrestle to have their men in SMC so that they can use school budget as they like. So every party tries to ensure their representation in School Management Committee. Udayapur is no exception.

We get to hear, watch and read news about disputes in formation of SMC across the country. In some cases, one group assaults the other with guns and sharp weapons.

More common is the practice of distribution of money to voters to influence outcomes.

Political meddling is a disease that has clogged our education system. And since this rot runs deep, it will be difficult to cure.

It is argued that greater involvement of political leaders in schools can help improve education quality and bring more funds and opportunities. This is not true.

Hardly any student has passed SLC from Shree Janata Higher Secondary School in regular. Those who do pass get third division.

Not a single student passed all subjects in grade eight final exams, which means they would not qualify for grade nine. The school had to request the district education office to clear students if they fail in no more than two subjects, a request the DEO granted.

There are nearly a dozen government schools in Thokshila VDC of Udaypur. The story is the same in every school. I haven’t seen local political leaders discuss ways to improve schools.

As for the teachers, all are affiliated to political parties. They rarely miss local, district or national programs organized by mother parties. If they ever miss something it will be schools, wherefrom they draw their salaries to feed their family and educate their children.

They blame parents and students for poor results.

The current Health Minister Gagan Thapa wrote on Twitter after the publication of last year’s SLC results: “72% of public school students fail, 87% of private school students pass; wherever we (political parties) have our presence most of them failed and wherever we are not most of them pass; it’s necessary to restrict us from entering the school.”

A US $4-billion School Sector Reform Program (2009 –2015) aimed at overhauling our school education system failed to deliver expected results. According to Education journalists the only achievement of SSRP is increment in enrollment of students at the primary level. During my last visit to Tarai districts, I found that enrollment rate among Madheshi Dalits has increased on paper but seldom do they attend the schools regularly.

An education expert from the UK says: “A key problem in Nepali government schools is that teachers lack skill and will. A lack of skill is something you can address, but a lack of will is a much greater problem. This lack of will is partly linked to the job-for-life culture.”

Nor is there any penalty for wrongdoing.

Teachers enjoy political protection and if a teacher is fired or transferred to a place he does not like, there is great political pressure to reverse the decision.

During research for BBC Sajha Sawal program we have found great discrepancy between record and reality. A school in Kapilvastu showed hundreds of students in its register, but there were only a handful in the classrooms. A primary school in Kathmandu had more teachers than students. We have seen how political activities have ruined the Durbar High School, Nepal’s oldest.

Some public schools have done well: the ones that have resisted political interference.

A few months ago I visited education offices in Kathmandu, Bhaktapur and Lalitpur and was surprised to see district education officers threatened by school principals and even teachers, just because they represent various teachers’ unions.

“I know they never attend school. But I can do nothing. If I do anything I will be transferred to a remote district,” a district education officer shared with me.

If you cannot assert your powers, why don’t you resign? I asked. “Then who will look after my family?” he questioned back, smiling.

Our education system has been badly politicized. So no matter how much money we pour into reforming school education, not much will change unless our schools can restrict political interference.

KATHMANDU, Aug 21: The government's efforts to uplift the quality of education at public schools through monitoring remain hamstrung by needless... Read More...

Cabinet meeting underway in Baluwatar, likely to endorse recommendations made by CCMC to contain spread of COVID-19
7 hours ago