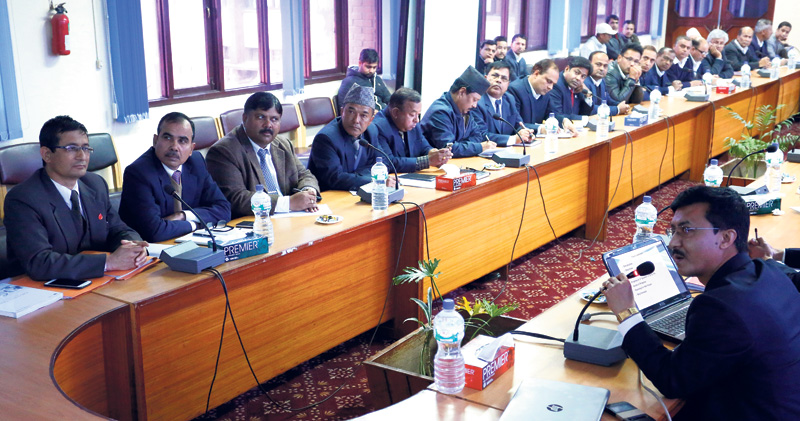 Civil Aviation Authority of Nepal (CAAN) Deputy Director General Birendra Prasad Shrestha (right) briefs journalists about a progress report on the civil aviation sector over the past year at a press meet at the CAAN offices in Babar Mahal, Kathmandu, on Wednesday. Photo: Dipesh Shrestha/Republica

KATHMANDU, Dec 29: Domestic carriers flew around 1.18 million passengers in the first nine months of 2016, according to the Civil Aviation Authority of Nepal (CAAN).

In the same period last year, domestic airlines had served 988,000 air passengers, Birendra Shrestha, the spokesperson for CAAN, said in a press meet in Kathmandu on Wednesday.

Devananda Upadhyay, director general of TIA, said that the rehabilitation work will complete in 14 to 18 months.

Speaking at the program, Sanjeev Gautam, director general of CAAN, said that aviation regulator has written a letter to the International Civil Aviation Organization (ICAO), outlining the improvements that Nepal has made aviation safety. ““We have asked the ICAO to carry out an audit of corrective measures that we have taken to address the significant safety concerns (SSC) relating to operations and other aspects,” he added.

The European Union (EU) has, for more than three years, put Nepali airlines in the list of carriers banned from flying in the European airspace.

KATHMANDU, Jan 7: While Tribhuvan International Airport (TIA), the only international airport of the country, is being criticized for its terminal... Read More...

KATHMANDU, Jan 13: Domestic passenger movement has been increasing remarkably in recent years, while travelling by road is full of hassles... Read More...