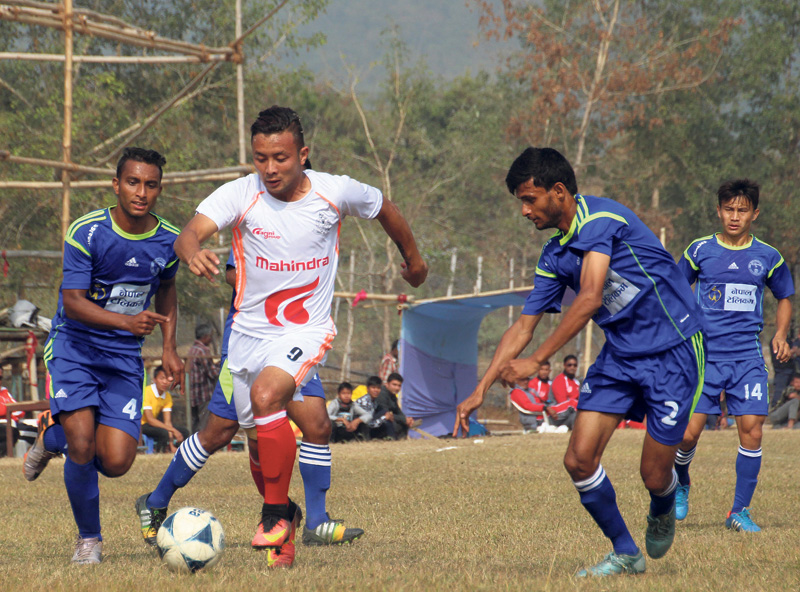 Players of Armed Police Force and Nepal Police Club in action during their men’s football semifinal match of the Seventh National Games at ANFA Technical Center in Dharan, Sunsari on Wednesday. Photo: Republica

Meanwhile, the second semifinal clash between Tribhuvan Army Club and Central Region remained undecided after it was postponed for Thursday due to bad light.

Earlier, the first semifinal match between APF and Police was pushed to extra 30 minutes after both sides failed to produce goals in the regular 90 minutes. But two goals in the extra time from Yubraj Khadka and Nabin Lama helped APF secure victory over departmental rival Police.

Earlier, the match between the two departmental sides was very competitive as both teams created numerous goal scoring chances in the regular 90 minutes. Police missed the chance to produce early lead in the game when Bharat Shah’s close range shot was saved by APF’s goalkeeper Amrit Chaudhary in the 12th minute. APF also missed an opportunity to score first half goal as Hari Karki failed to utilize a free header in the 17th minute. Another notable missed chance of Police came in the 8th minute of extra time when Nir Kumar Rai couldn’t score in a one versus one situation against APF goalie Amit.

The loser from the second semifinal match will take on Police for the third place play-off on the same day.