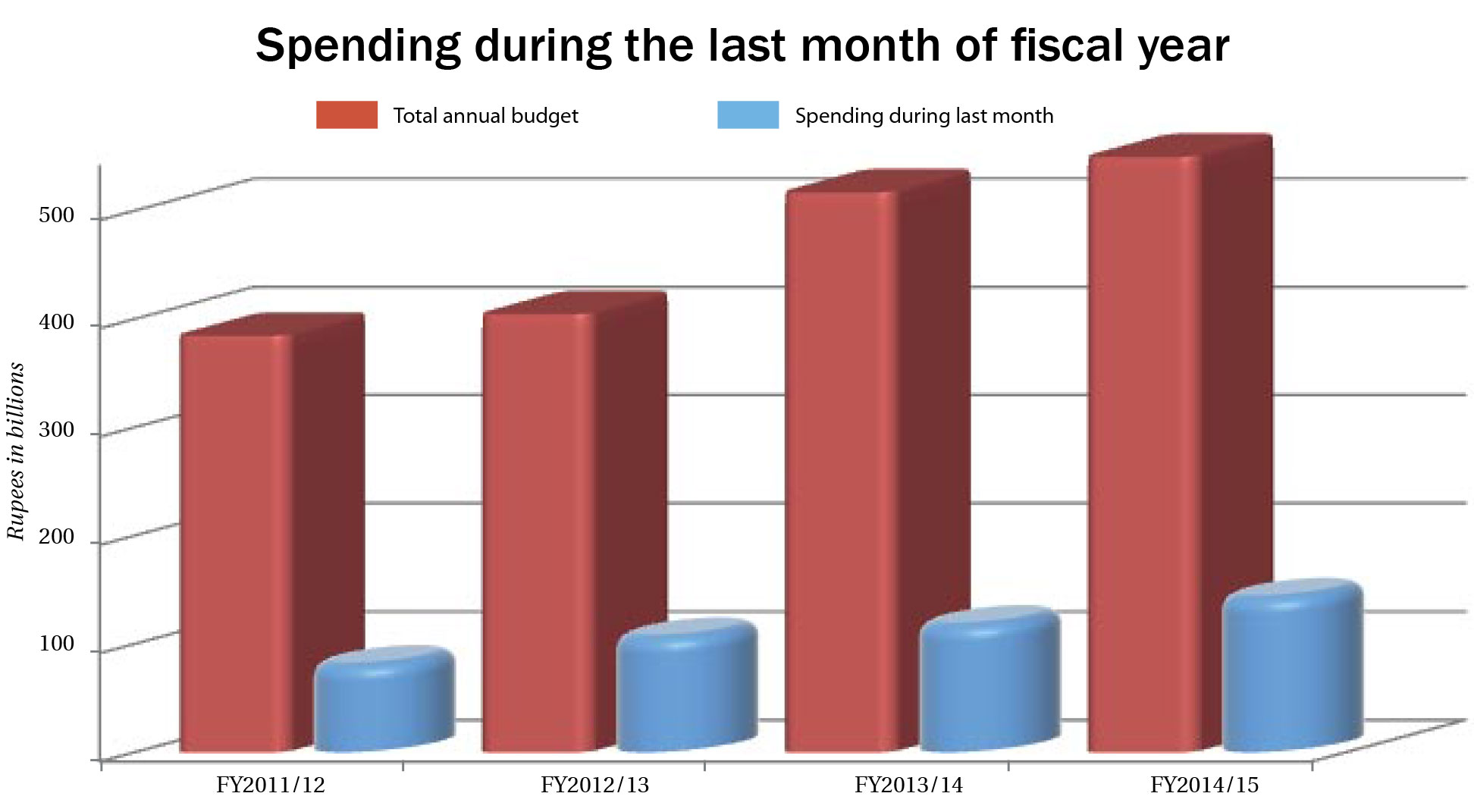 The last month of the fiscal year -- from mid-June to mid-July -- generally sees spending of more than a quarter of the total annual budget, figures compiled by the Financial Comptroller General’s Office shows.

The trend has not only encouraged financial indiscipline but also exposed lack of accountability and gross violation of basic fundamentals of public financial management, let alone the quality of last minute expenditure.

“Last minute spending is a financial crime,” says former senior advisor to the Ministry of Finance Keshav Acharya.
In Fiscal Year 2010/11, the Ministry Finance had issued a directive to line ministries advising them not to spend more than 40 percent of the total budget in the last three months, from mid-April to mid-July, Acharya reminded, adding that the ministry had also asked all the government agencies not to spend more than 20 percent in the 12th month of the fiscal year.

“However, the government has failed to implement this rule.”

Successive governments have been spending almost a quarter of the total budget in the last month of the fiscal year, according to the Financial Comptroller General’s Office (FCGO).

The government had managed to spend only half of the total budget by the end of the 11 months of the current fiscal year.

Though the low level of capital expenditure is attributed to budgeting system as it incorporates half-baked projects and projects of political interest often not implementable, the government has been not able to spend the recurrent expenditure too.

However, finance ministry officials say that the trend of last-minute spending will continue this fiscal year as well and the remaining 20 days will see surge in overall budget spending.

However, the paying authority will start bargaining before making payment and keeps the payment pending till they get their cut, Khanal added.

“At the end of the fiscal year, either one has to give the cut to get paid or the budget will be frozen.”

The current government record system cannot show when the work has been completed, he said.

“Thus, the bill paid at the last minute could be the payment of the work completed in January or June,” he said, adding that the paying authority takes the advantage of the lack of tracking system and bargains for the cut.

Paying agencies like the Ministry of Physical Infrastructure and Transportation and Ministry of Energy has the culture of making payment in the last hour, pushing last month’s spending figures up.

Development partners also send the record of the projects completed through their direct payment at the last month of the fiscal year.

However, Khanal attributed the last hour surge in budget spending to the lack of governance, financial indiscipline, eroding capacity of bureaucracy and lack of political will.

KATHMANDU, July 13: Most government offices across the country are found to be engaging in massive irregularities in recurrent expenditure... Read More...

‘Govt steps not enough to end child marriage in Nepal’