Puncturing of tyre is cause of Mugu bus accident: Police 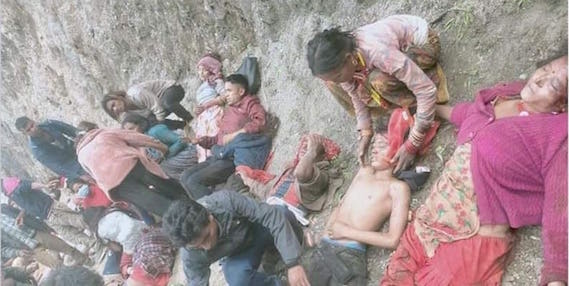 MUGU, Oct 13: The passenger bus (Bhe 1 Kha 3167) belonging to the Chhayanath Rara Transport Pvt Ltd which was coming towards Mugu from Nepalgunj met the accident on Tuesday due to the puncturing of its tyre.

Thirty two people were killed and 13 were injured in the accident, police said. It is said the ill-fated bus was carrying 46 passengers. The mishap took place at 1 pm at Tapane Khola of Pina village, Chhayanath Rara Municipality-7.

The bus fell some 500 metres down from the road as it bacame unbalanced after the front tyre on the side of the driver's seat punctured, police said. The accident site is a turning on steep slope at two minutes' walking distance from the police post at Pina village.

A police team from the post was patrolling below the accident site at the time of the accident. The police personnel on patrolling heard a big bang and saw the bus falling down from the cliff. Looking at the conditon of the bus, the tyre on the side of the driver's seat is all torned which gives ground that the accident occurred due to the puncturing of the tyre and not any other cause, Deputy Superintenndent of Police at the District Police Office, Chitra Bahadur Bhattarai, said.

Most of those killed and sustaining injuries in the accident were college students returning to their home for the Dashain festival from Kathmandu and other cities. Among the dead, 18 are male, eight female and two minors while the name and address of four others has not been ascertained yet, police said. (RSS)