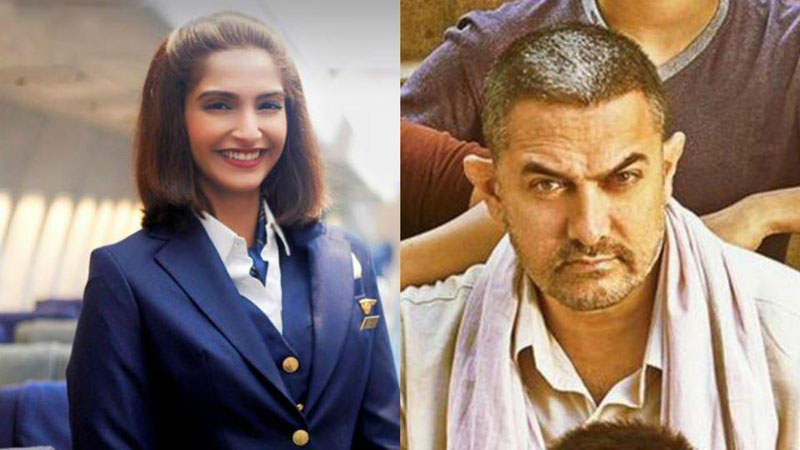 Cinema is often considered as a means to unwind from real life but this year saw filmmakers imitate stories of actual people and their lives in movies like Aamir Khan’s Dangal, Sonam Kapoor-starrer Neerja, Sushant Singh Rajput’s MS Dhoni and Manoj Bajpayee’s Aligarh.

The success of such projects have proved that a great movie doesn’t always need action scenes, over-the-top comedy and when placed in the hands of the right director and actors, the truth can be far more compelling than fiction.

Aamir Khan teamed up with director Nitesh Tiwari for Dangal to bring on the big screen the story of Mahavir Singh Phogat, who trained his daughters Geeta Phogat and Babita Kumari to become world-class, medal-winning wrestlers.

For the film, Aamir went the whole length to get his character right – underwent a massive physical transformation, took wrestling training and learnt Haryanvi.

Sonam Kapoor-played the protagonist in Ram Madhvani- directed biography film Neerja, which is based on the life of flight attendant Neerja Bhanot, who died saving the lives of over 300 passengers on a hijacked Pan Am plane.

Despite the film also starring acting veteran Shabana Azmi, it was Sonam’s dignified, strong and real performance as Neerja which left the viewers impressed and the film turned out to be a career-defining film for her.

Actor Sushant Singh Rajput stepped into the shoes of India’s most successful captain Mahendra Singh Dhoni in Neeraj Pandey’s MS Dhoni: The Untold Story. The biopic did not delve much into controversies of Dhoni’s professional life and was more about his emotional journey from a budding cricketer to a ticket collector to finally getting the top job in Indian cricket. But it was a clear winner as the film enjoyed a great run at the box office.

Hansal Mehta brought to the big screens a subtle, sensitive take on a controversial real-life court case involving the victimisation of a gay college professor, Shrinivas Ramchandra Siras in his biographical drama Aligarh. And to top it off, Manoj Bajpayee gave a riveting and nuanced performance as the wronged professor in the powerful film, which saw Rajkummar Rao in a supporting role.

Akshay Kumar brought back the sensational murder case of Naval Officer K M Nanavati on the big screen with his Rustom. The 1950s set film draws heavily from the incident of Nanavati murdering businessman Prem Ahuja, who was his wife’s love. The Tinu Suresh Desai film performed well at the box office.

Azhar, another cricket-based biopic to release this year, was about Mohammad Azharuddin, who is arguably India’s most controversial cricket captain. Emraan Hashmi took on the task of playing the lead role and did a good job in picking up Azhar’s mannerisms and body language. The Tony D’Souza-directed film, however, tried too hard to present Azhar as a misunderstood hero and did not turn out to be a success.

CPN-UML's Bharat KC wins in Dolakha B
1 hour ago