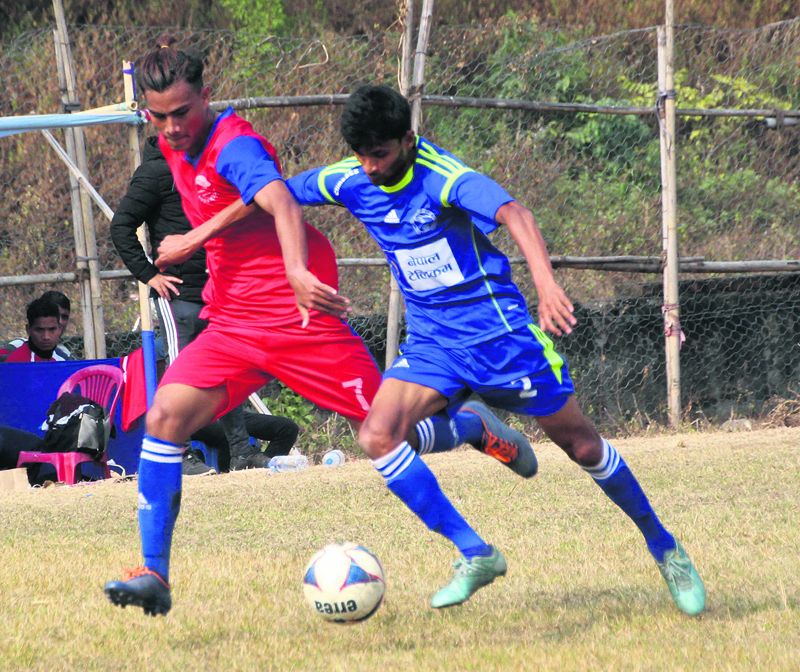 Republica Rabin Shrestha (R) of Nepal Police in action against Central Region during a men’s football match of the Seventh National Games at ANFA Technical Center in Dharan on Monday.

DHARAN, Dec 27: Nepal Police Club and Central Region have progressed to the men’s football semifinals on Monday as Group B winner and runner-up respectively at the Seventh National Games.

In the match held at ANFA Technical Center, Dharan, Police defeated Central Region 3-1 and extended its points tally to six and booked the place in the last four. Central Region which has already advanced to the semifinals collecting equal six points from last two matches became group runner-up on the basis of head-to-head result.

In the second match of the day, Eastern Region registered a 3-1 victory over Western Region.

However, both teams crashed out from the competition after producing just one group win each.

Earlier, Jumanu Rai and Ram Wagle scored one goal each in Police’s win over Central Region while departmental side got another goal as gift. Police went ahead in the match in the 21st minute with Jumanu’s penalty goal. Police was awarded penalty after Central Region’s player fouled on Ravi Paswan and Jumanu easily converted it. Central Region came back into the game in the second half after Dinesh Henjan scored in the 68th minute. However, Sanjiv Karki putting the ball in his own net while attempting to clear the ball coming from Buddha Lama’s cross helped Police extend the lead to 2-0 in the 74th minute. Ram Wagle notched a goal just two minutes before the time as Police sealed 3-1 victory.

In the second match of the group, home team Eastern Region overcame Western Region 3-1 with the help of goals from Nishan Limbu and Sushil Yadav while Anil Gurung scored a consolation for the losing side.

On Tuesday, Armed Police Club (APF) will face another departmental club Tribhuvan Army Club in the Group B fixture while Far-Western Region and Mid-Western Region will battle in another match of the same group.