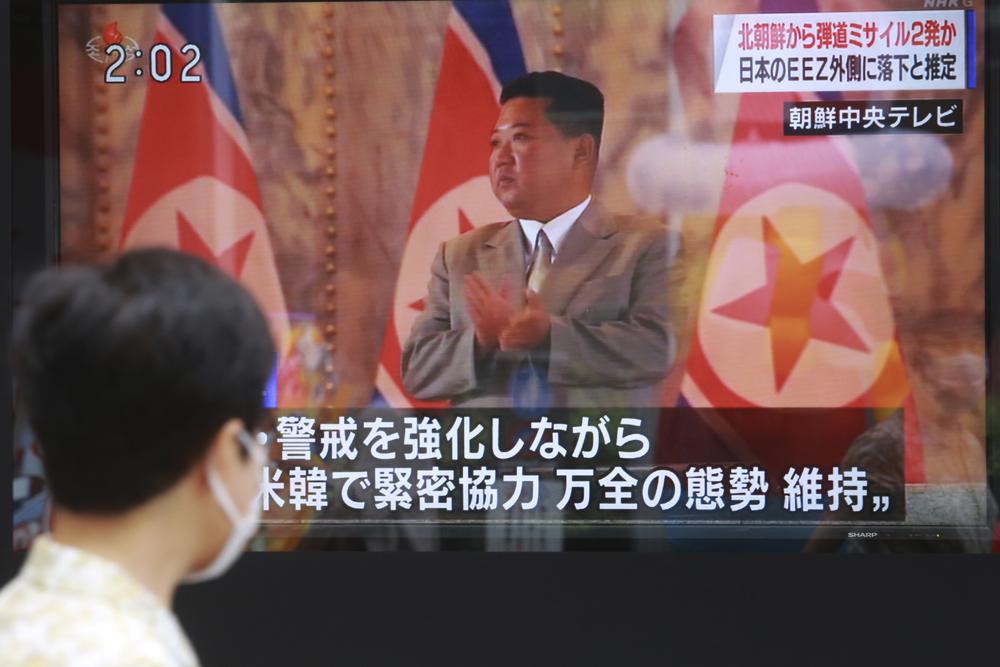 SEOUL, South Korea, Sept 15: The rival Koreas test-launched ballistic missiles hours apart from each other on Wednesday in a display of military assets that came amid a faltering diplomatic push to strip North Korea of its nuclear program.

The statement said the weapon is expected to help South Korea deter potential external threats, boost its self-defense posture and promote peace on the Korean Peninsula.

Experts say the North Korean launches showed it’s pressing ahead with its arms build-up plans while trying to apply pressure on the United States to resume stalled nuclear talks.

It’s not usual for South Korea to publicly disclose high-profile weapons tests that some experts say could provoke North Korea unnecessarily. Observers say Moon’s government, which has been actively pursuing reconciliation with North Korea, may be responding to criticism that it’s too soft on the North.

South Korea’s military said the North Korean missiles, launched from central North Korea on Wednesday, flew about 800 kilometers (497 miles) on an apogee of 60 kilometers (37 miles) before landing in the waters between the Korean Peninsula and Japan.

The U.S. Indo-Pacific Command said the launches, while highlighting the destabilizing impact of North Korea’s illicit weapons program, didn’t pose an immediate threat to “U.S. personal or territory, or to our allies.”

“The firings threaten the peace and safety of Japan and the region and are absolutely outrageous,” Japanese Prime Minister Yoshihide Suga said. “The government of Japan is determined to further step up our vigilance and surveillance to be prepared for any contingencies.”

Japan’s coast guard said no ships or aircraft reported damage from the missiles.

Wednesday’s launches were a violation of U.N. Security Council resolutions that bar North Korea from engaging in any ballistic missile activities. But the U.N. council typically doesn’t slap fresh sanctions on North Korea when it launches short-range missiles, like the ones fired Wednesday.

On Monday, North Korea said it tested a newly developed cruise missile twice over the weekend. North Korea’s state media described the missile as a “strategic weapon of great significance,” implying it was developed with the intent to carry nuclear warheads. According to North Korean accounts, the missile demonstrated an ability to hit targets 1,500 kilometers (930 miles) away, a distance putting all of Japan and U.S. military installations there within reach.

The North Korean missile tests came as Chinese Foreign Minister Wang Yi was in Seoul for meetings with Moon and other senior officials to discuss the stalled nuclear negotiations with the North.

It’s unusual for North Korea to make provocative launches when China, its last major ally and biggest aid provider, is engaged in a major diplomatic event.

Moon’s office said Moon told Wang that he appreciates China’s role in the international diplomatic push to resolve the North Korean nuclear standoff and asked for Beijing’s continuing support. Wang said Beijing will continue to support the denuclearization of the Korean Peninsula and improved ties between the Koreas.

The talks between the United States and North Korea have stalled since 2019, when the Americans rejected the North’s demand for major sanctions relief in exchange for dismantling an aging nuclear facility. Kim’s government has so far threatened to build high-tech weapons targeting the United States and rejected the Biden administration’s overtures for dialogue, demanding that Washington abandon its “hostile” policies first.

North Korea still maintains a self-imposed moratorium on nuclear and long-range missile tests, a sign that it may not want to completely scuttle the nuclear negotiations with the United States.

Canadian citizen busted on the charge of pedophilia
14 hours ago

Agreement between Nepal Tourism Board and India's TAAI
15 hours ago

MCC will be endorsed only after consensus among major political parties: FM Dr Khadka
10 hours ago

54 injured in bus accident
10 hours ago