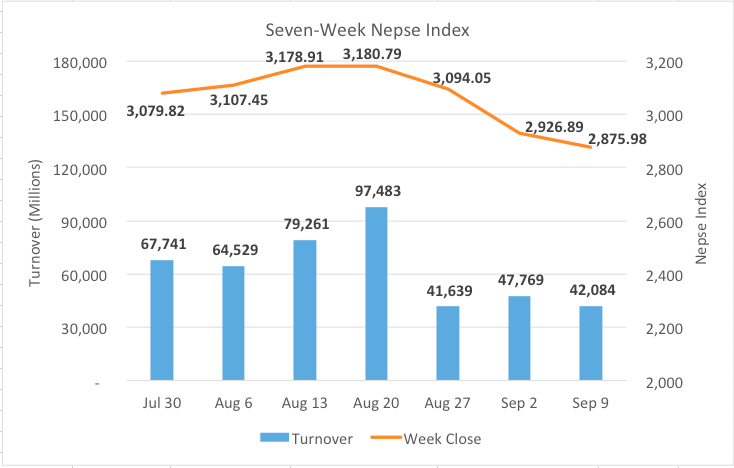 KATHMANDU, Sept 10: The Nepal Stock Exchange (Nepse) index opened week with serious weakness with the benchmark dipping more than 100 points in the first trading day of the week. Sunday’s decline stood at a record 108.04 points. A sharp rally ensued on Monday as the benchmark rose by a whopping 161.94 points making another record for biggest daily gain. The volatility tapered off but the index remained under pressure in the latter part of the week. The index dropped 44.18 points on Tuesday and 60.02 points on Wednesday. The market remained unchanged on Thursday dipping a modest 0.61 point. Overall, the weekly loss stood at just over 50 points with Nepse closing at 2,875.98.

With the current decline, the bourse witnessed its biggest correction since the COVID-dip of March 2020. However, stocks are trying to gain footing with traders now taking buying positions at relatively lower rate. The loan against shares limit of 12 crore for individuals had triggered the loss since Mid-August which has extended till early September. Nonetheless, investors lack conviction in the current juncture as reflected by absence of notable buying and selling pressure of late. Total weekly turnover stood at Rs. 42 billion.

Sensitive Index also took a hit of 1.20% reflecting weakness in Class ‘A’ stocks. Only two sectors closed in positive territory. Hydropower sub-index rose 0.73%, while ‘Others’ sector climbed 0.05% in the week. On the other hand, Trading sector tanked sharply closing the week with a 6.12% decline. Finance, Non-Life Insurance and Hotels & Tourism sub-indices fell 5.56%, 3.71% and 3.54%. All other segments struggled. Heavyweight banks fell 1.62% on average.

On Friday, Sadhana Laghubitta Bittiya Sanstha Ltd declared its dividend for the year 20/21. The micro sector lender has announced 25% stock dividend, which is subject to approval from its Annual General Meeting.

As per the ARKS weekly technical analysis, the index formed a bearish spinning top candlestick with long wicks on either side, reflecting high volatility and indecision. The index found support at around 2,800 mark, which also stands as a previous low hit in July. Hence, 2800 psychological line stands as a strong support, a rebound from which can see the index make a move to the upside. 3,000 mark acts a resistance in the current juncture.

KATHMANDU, Oct 1: After ending in green in the prior week, stocks opened with notable weakness on Sunday. On the first... Read More...

KATHMANDU, May 22: A rally of more than 54.29 points on Sunday helped Nepse index break its all-time high hit at... Read More...