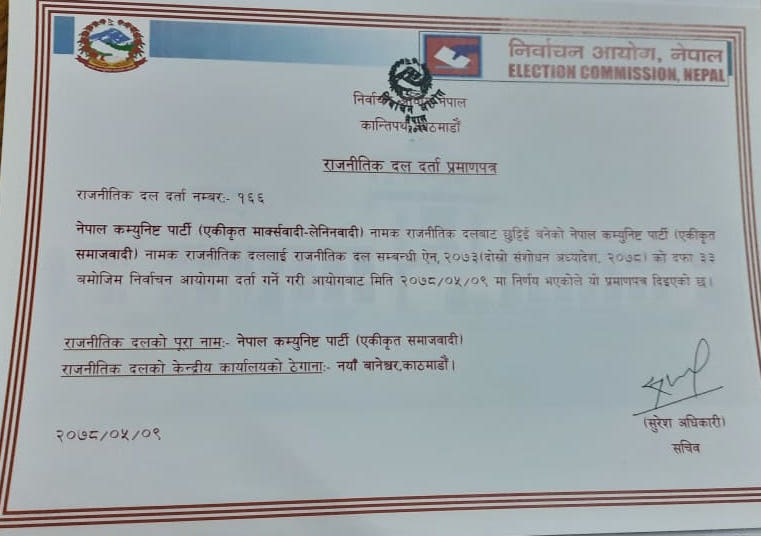 According to the spokesperson of the Commission, Raj Kumar Shrestha, Secretary of the Election Commission Suresh Adhikari handed over the certificate of party registration to CPN(Unified Socialist) leader Rajendra Prasad Pandey.

Of the 58 names proposed, only Bhaskar Kafle and Rabin Koirala could not be verified today. Former Prime Minister and the signature of senior party leader Jhala Nath Khanal has been verified by the Nepali Embassy in New Delhi, India.

Likewise, 29 members of the federal parliament also verified themselves in favor of the new party. Though the petitions of MPs Som Prasad Pandey, Mayadevi Gyawali and Sarada Bhatta were not signed, they reached the Commission on Wednesday for verification.

Following the split from the CPN (UML), the support of 41 central members out of the then existing 203 was required to get the new party's recognition. This is the second time that UML has split following 2054 BS over the issue related to the Mahakali treaty.

The Election Commission has also given party recognition to the Democratic Socialist Party Nepal led by leader Mahanta Thakur. Thakur led a group that disassociated themselves from the Janata Samajbadi Party, which is now led by Upendra Yadav.

Oli is detached from the communist movement and ideals: Madhav Nepal

KATHMANDU, Nov 11: The Election Commission (EC) on Sunday made public the final list of leaders contesting the parliamentary and... Read More...