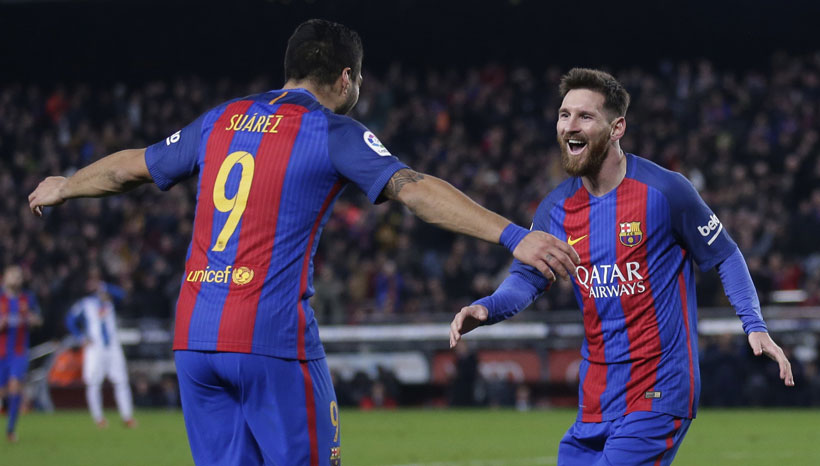 Luis Suarez celebrated signing a new contract with Barca on Friday by firing the home side ahead in the 18th minute with the help of a brilliant pass from Andres Iniesta and the Uruguayan struck again in the 67th after a mazy run from Messi.

The Argentine maestro cut the Espanyol defence to ribbons again to allow Jordi Alba to score the third in the 68th before capping the victory with a goal of his own in the 89th, after David Lopez had pulled one back for the visiting side.

"When everyone is playing well it's important for individual talents, like those Messi has, to flourish. He's a sensational player," said Iniesta.

"It was an intense derby, we played well and we are very happy to have won the last league game of the year. We feel very good at the moment and we finish the year in the league feeling very happy with the way we are playing."

Barca are second on 34 points, three behind Real Madrid who have a game in hand due to their participation in the Club World Cup which they lifted after a 4-2 extra-time win over Kashima Antlers earlier on Sunday, while Sevilla are third on 33.

Espanyol have not beaten Barcelona since 2009 although they went into the game on the back of a nine-game unbeaten run in the league, conceding only once in their last six.

Their positive form counted for little, though, against a Barca side who have rediscovered their form after a slump in November.

The hosts made their intentions clear when Suarez burst through the middle and worked the ball to Neymar, only for Messi to send the final pass whistling past the near post.

The opener came from a lightning-quick break which began with a sliding tackle from Javier Mascherano on compatriot Pablo Piatti and Iniesta produced a sumptuous diagonal long ball for Suarez to knock into the far corner with one touch.

In the second half, Messi seized a loose ball and skipped past five defenders before his shot was spilled by substitute keeper Roberto and Suarez gobbled up the rebound to score again.

Messi produced another breathtaking run into the box a minute later, worming his way through four defenders and laying the ball off for Alba to ram past Roberto.

Lopez briefly silenced a jubilant Nou Camp with a well worked goal on the counter but Messi got the festivities started again with a fully deserved goal of his own, latching on to a chipped Suarez pass to put the ball through the keeper's legs.

"It's always good to finish the season on the right foot and I think we've hit the right notes and are on the right track," said Barca coach Luis Enrique.

"2017 is set to be a good year for us and we have the challenge of trying to retain the league title. I like what I've been seeing recently and this team is built for challenges like this."

Deportivo La Coruna piled more misery on bottom side Osasuna by beating the visiting Navarrans 2-0 thanks to first-half goals from Florin Andone and Ryan Babel.

Lowly Leganes drew 1-1 at home to seventh-placed Eibar despite having keeper Iago Herrerin sent off in the 26th. Miguel Angel Guerrero had put the hosts ahead three minutes earlier but former Manchester United winger Bebe levelled in the 76th.