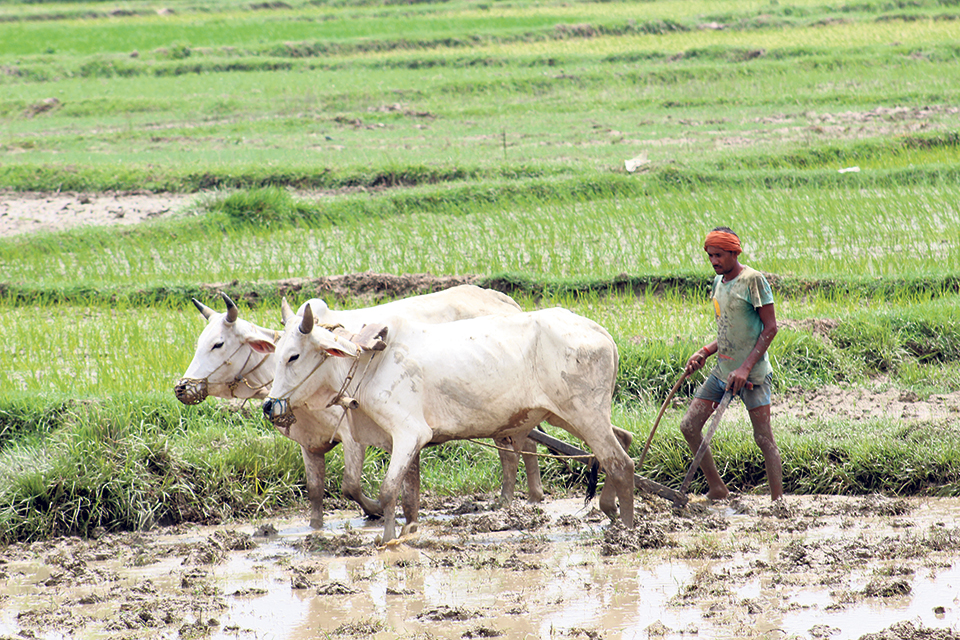 Farmers in Nepal are mainly involved in subsistence production for maintaining both economic and social demands. Limited food grains and livestock are sold for cash income. Off-farm income opportunities are limited. Therefore, all household members are involved in farming activities.

Agricultural communities developed approximately 10,000 years ago when humans began to domesticate plants and animals. As agriculture developed, the environment of the fields and paddocks became increasingly differentiated from that of the natural environments in which plants and animals originally evolved. Then tilling and crop rotation were introduced for fertility reasons and for the control of natural enemies. For animals, domestication created a more predictable environment with increased resource availability during harsh times and protection from predators, but increased threats from contagious diseases. Domestication, selection, and hybridization, both unconscious and conscious, led to significant changes in the appearance of plants and animals and their nutritional value. Thus, modern agriculture – its species and practices, is the outcome of a continuous process of change.

Agriculture began independently in different parts of the globe and included a diverse range of taxa. At least 11 separate regions of the Old and New Worlds were involved as independent centers of origin. Irrigation, crop rotation, and fertilizers were introduced soon after the Neolithic Revolution and developed much further in the past 200 years, starting with the British Agricultural Revolution. Since 1900, agriculture in the developed nations, and to a lesser extent in the developing world, has seen large rises in productivity as human labour has been replaced by mechanization, and assisted by synthetic fertilizers, pesticides, and selective breeding.

At present, there are two main types of farming: subsistence and commercial. Subsistence agriculture or farming is defined as producing food primarily for local consumption (the farmer's family) and most often occurs in developing nations like Nepal. In this system of production, the scale of production is small but diversified. It is highly dependent on animal power. It is labor-intensive on the farmer using limited space and limited waste. This is a widespread practice in East Asia, South Asia, and Southeast Asia where population densities are high, and land use is limited. Subsistence farming goes back to the earliest farmers who were making the transition from nomadics, following herds of animals to living in semi-permanent villages.

Farmers in Nepal are mainly involved in subsistence production for maintaining both economic and social demands. Limited food grains and livestock are sold for cash income. Off-farm income opportunities are limited. Therefore, all household members are involved in farming activities. Besides cereals production, pulses, vegetables, and root crops are produced to meet the increasing food demand. It is clearly observed that the ecology has its dominance on the possibilities of growing crops and livestock.

The changes in the technology and gradual adoption of market-oriented production along with external linkage show a progressive change in the production system over the traditional one.

In the case of Nepal, the traditional farming system of growing cereal crops and livestock for the purpose of subsistence has gradually been replaced by cash crops. Farmers, particularly after 1980, have started cultivating cash crops such as vegetables, fruits, cardamom, ginger, broom-grass, poultry bird and dairy cow for commercial purposes. Consequently, previously unused and marginal lands are now covered by these high value cash crops. Thus, changes in crops and livestock have changed the agricultural landscape and environment resulting in agricultural evolution. These changes in the farming system, particularly adoptions of non-cereal crops are positive and innovative interventions in the farming system of Nepal.

The collective response to the spectra of hunger resulted in what became known as the Green Revolution. In Green Revolution agriculture, the major change has been the improvement of irrigation systems, with upstream storages allowing the extension of cultivation into the dry season. This has enabled intensification and specialization, typified by the introduction in the 1960s of improved high-yielding varieties that require large inputs of chemical fertilizer. At their most intensive, such systems have been producing two or three crops per year, often incorporating a short duration legume between cereals. Because of the excellent resource base of the Green Revolution agriculture, it became possible to commercialize agriculture.

These days, commercial agriculture is found in both the developing and developed nations. This is now the predominant form of farming in Southeast Asia and throughout the developed world and includes crops like wheat, rice, maize, different seasonal fruits and vegetables, tea coffee, sugarcane, jute, poultry and dairy industries. In developed countries, farmers are involved in large-scale commercial farming, both rain-fed and under irrigation. In addition, they receive substantial government support aimed at increased domestic production and exports.

Commercial agriculture is unique as the farmers can irrigate the land or keep the farm systems under operation all year round. They do not rely on the rains or natural supplies as ordinary farmers do since they have advanced technologies, machines, and artificial growth enhancers to have their crops or animals sustained throughout.

Nepal started the process of commercialization of agriculture over two decades ago, but the process has been slow. Predominance of traditional farming practices, less mechanized agriculture, heavy reliance on weather conditions, particularly monsoon rain, identified but less prioritized competitive commodities and poor infrastructure are rather the main causes. Furthermore, small, uneconomic farm size, weak link among actors along the value chain, lack of technical knowledge among farmers, lack of business skills among entrepreneurs and weak implementation of supporting policies and strategies are also to blame for this.

The planet’s population is projected to increase almost 20% to 9.15 billion by 2050. Such growth will present immense challenges and food production would have to grow by 60% to meet this increased demand. At the same time, the production system must be sustainable. This will make future agriculture more complicated and will have to use sophisticated technologies such as robots, temperature and moisture sensors, aerial images, and GPS technology.

As global temperatures rise and weather patterns become harder to predict, farmers are looking to technological innovations to adapt. Some innovative farmers have started to protect crops from such  elements with the help of enhanced greenhouses and vertical farming setups that can grow indoor crops year-round. Future agriculture will also need advanced connectivity to overcome many other challenges.