KATHMANDU, June 26: Rupa Sunar has lodged a complaint against nine online media outlets at the Press Council, Nepal, accusing them of defaming her.

In her complaint, Sunar has claimed that those online media disseminated wrong information to disrupt good relations between different castes, religions and communities.

Sunar, who is also a journalist by profession, had lodged a complaint against the Babar Mahal-based landlady Saraswati Pradhan . In her complaint, she had claimed that she had been refused to rent a room citing her so-called lower caste.  Pradhan was arrested on June 20 for investigation.

Pradhan, however, was released after three days on June 23. The District Attorney Office of Kathmandu ordered the release of Pradhan without taking the case to the court, citing the lack of evidence against her.

According to Sunar, the online media platforms disseminated false news accusing her of being manipulated by somebody else as she attempted to raise her voice against caste-based dicrimination.

“The rumor is aimed at disturbing the good relations among the people of  different castes, religions or communities and has also openly encouraged caste-based and gender discriminations,” she has claimed in her complaint. 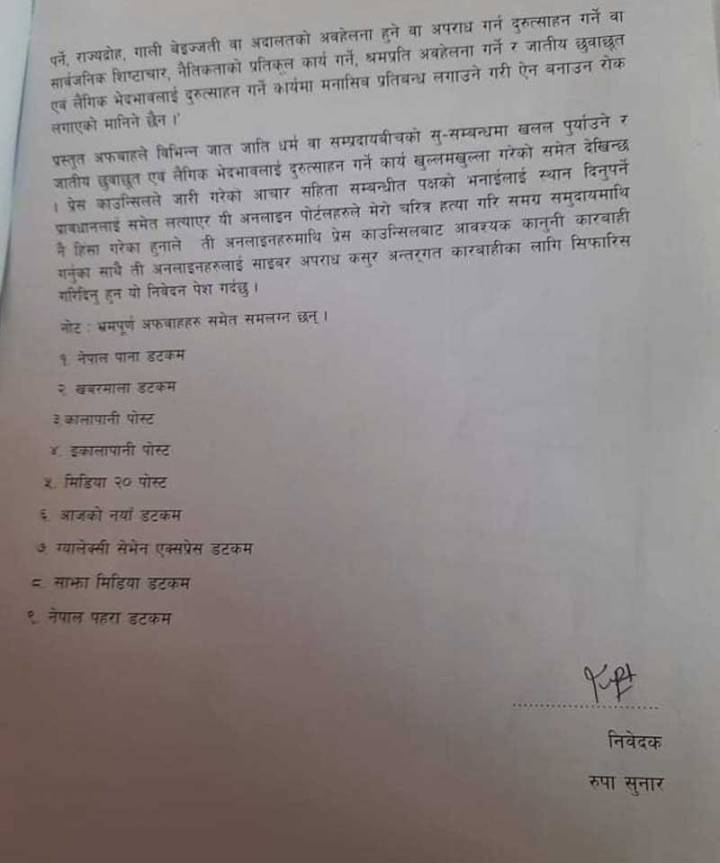 KATHMANDU, June 23: A landlady arrested on the charge of refusing to rent out a room in her house to... Read More...

KATHMANDU, June 20: Police have arrested a landlady who refused to rent out a room in her house to Rupa... Read More...

Is the ruling alliance pulling an ‘election stunt’ in Nijgadh?
8 minutes ago