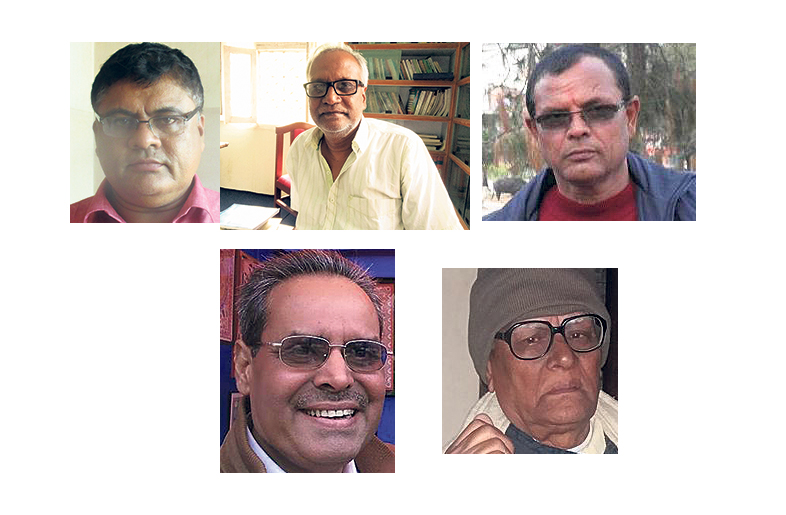 JANAKPUR/ LAHAN/RAJBIRAJ, Dec 16: Madhes-based political parties did not welcome the constitution promulgated on 20 September, 2015. When the entire country was rejoicing over the promulgation of the first constitution of the Republic of Nepal, people in Madhes protested it by announcing blackout. The reason was - ‘Madhes voice’ was not addressed by the constitution. Differences regarding citizenship provisions, provinces and representation issues, among others, were cited as the reasons behind the dissatisfaction. With the government still struggling to take Madhes based parties in confidence, the constitution has not been implemented yet.

Civil society and political leaders in Madhes state that Madhes is equally worried about the political deadlock and want to see the country moving further. But for that to happen the first thing to be done is to address demands raised in Madhes, they say.
His five decade long experience in Madhes and mainstream politics makes Khushilal Mandal to believe that there is no option other than seriously addressing Madhes issues before holding the elections. Only after the dissatisfactions are responded to, the country can move further, including holding elections, he said. “If anyone thinks that the local election could be an option for now, that’s wrong. Without understanding Madhes and without feeling the pulse here, hammering the nail won’t help in delivering the objectives,” he said adding that the local election will not bridge the gap but trigger further conflict if the government goes for election without addressing the concerns of Madhes. “We all are in favor of ending the deadlock. But that cannot happen until the disgruntled voice of a huge community is heard and responded to.”
Mandal welcomed the recent constitution amendment initiative as a positive sign but warned that the amendment must be endorsed and owned by all political parties. “We must strive for a constitution that could be owned by all so that the conflict is resolved,” he said. He shared that talk of local elections do not sound realistic in the present scenario. “Officers at the election commission are saying that the election cannot be held in Baishakh. Madhes based parties are also not in its favor. In such an atmosphere, would there be any meaning of holding elections?”

He opined that the lack of far-sightedness among politicians is the main reason for the country’s political restlessness and claimed that political parties and leaders have miserably failed to meet people’s aspirations.

Dr Mahadev Sah stressed that all major political parties must reach a consensus on Madhesh issues. Until and unless all the parties feel equally responsible to address those issues, things are not going to work out, he said. Sah who has closely studied Madhes politics, concludes that Madhes issues cannot be addressed until and unless the parties come together by keeping aside their personal and partisan agenda. “The solution of Nepal’s political deadlock depends on two things - one, amendment of the constitution, and second, implementation of the constitution. Now see, it is very unlikely that CPN - UML will support constitution amendment as the current government toppled it down to come to power. And until the UML party agrees for the amendment, there’s no ray of hope,” he said pointing to the reason behind the existing political stalemate. “Either UML must be flexible or Prachanda government must resign,” he opined forwarding it as a solution to resolve the deadlock.

Another analyst of Madhes issues Vijaya Prasad Mishra feels that it is the CPN - UML who must take a step back from its stance and help the country move forward by agreeing for the constitution amendment. “CPN - UML must give up its stance to help the country move ahead. That’s the only way to end the deadlock and institutionalize the achievements of the years-long conflict,” he said.

Dr Hem Kumar Mishra, another political analyst from Madhes noted that the amendment proposal is nothing but only a trick of the Maoists to hoodwink others. “Even the Maoists are not serious about the amendment, though they proposed it. It’s only eyewash,” he said.

He opined that the Maoists and Congress actually came up with the proposal just to impress the international community. “The latest agreement between the three parties has further confirmed my reading. Or else, how could they agree for local elections by keeping the amendment proposal in limbo?” he questioned. Dr Hem Kumar suggests that the country must go for central and provincial level elections before holding local elections. “If they go for local elections in the current situation, it is sure to invite serious conflict and push the country even backward,” he warned.

Professor Bhogendra Jha, who was also a member of State Restructuring Commission formed at the time of first Constituent Assembly, stated that the country won’t move ahead until the federal demarcation is fixed, wisely. “Nawalparasi should not be touched at all. Kailali and Kanchanpur should be under Tharuhat. And Sunsari and Morang should also be divided so as to merge some of its area with Madesh,” he said.

SURKHET, June 21: Geeta Nepali, 26, was an artist in the Maoist militia during the conflict era. Now, she has been... Read More...