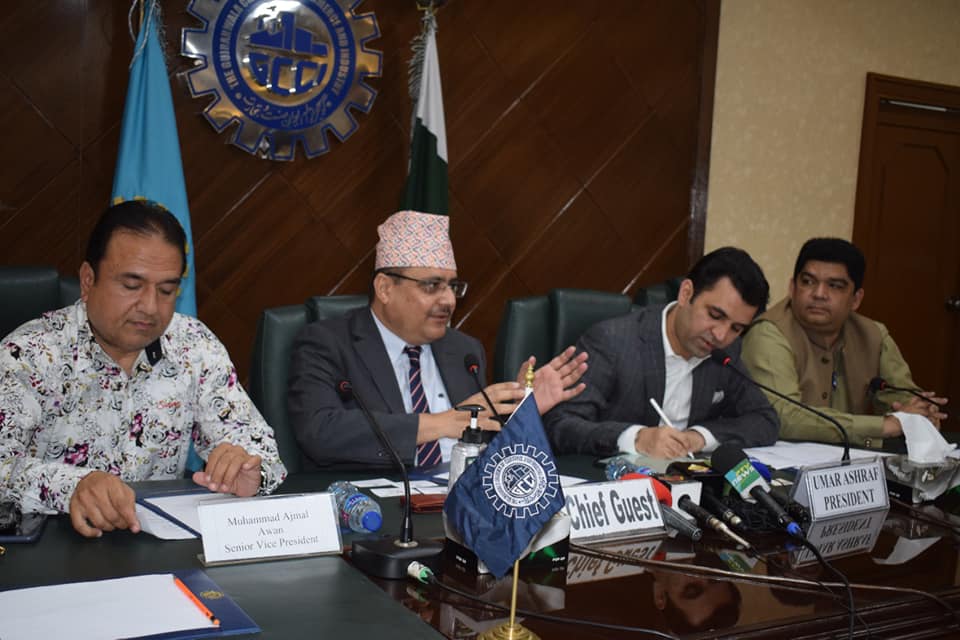 KATHMANDU, June 18: Ambassador of Nepal to Pakistan, Tapas Adhikari on Thursday held a meeting with president of Gujranwala Chamber of Commerce and Industry (GCCI), Umar Ashraf Mughal, and its members to further enhance business and trade interactions between Nepal and Pakistan.

During the interaction, Ambassador Adhikari highlighted Nepal-Pakistan bilateral relations and economic prospects between the two friendly neighboring countries. He also underlined Nepal’s investment policy and urged them to explore the economic opportunities available in Nepal to further strengthen bilateral relations, according to the Embassy of Nepal in Pakistan.

As a center of mountain tourism, the envoy also suggested people in Pakistan make a plan to visit Nepal to have a taste of Nepali hospitality. A large number of Urdu and Punjabi media persons were also present during the program.

During the program, GCCI President Mughal and other members presented the business activities in Gujranwala. They assured that the Chamber will visit Nepal and take stock of business opportunities.

Gujranwala is a city and the headquarters of Gujranwala Division located in Punjab, Pakistan. The city is Pakistan's 5th most populated metropolitan city with a population of five million .

Founded in the 18th century, the city served as the capital of the Sukerchakia Misl State between 1763 and 1799, and is the birthplace of the founder of the Sikh Empire, Maharaja Ranjit Singh. Gujranwala is now Pakistan's 3rd largest industrial centre after Karachi and Faisalabad, and generates five percent of Pakistan's GDP.