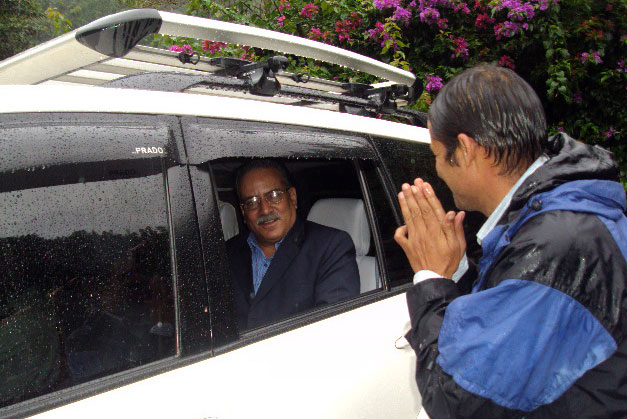 It was only a couple of weeks ago in this column that I had highlighted the tendency of our politicians to reverse roles with our comedians. And true to form, this time around it’s none other than our Prime Minister who has decided to take up the challenge. Yesterday, the Office of the Prime Minister and Council of Ministers released the property details of the PM and his cabinet of ministers.

Although, barring the property details of the PM, there wasn’t anything else that merited attention it still came as a shock to a lot of people who seemed genuinely surprised at the assets in possession of some of these politicians. Well, what were you expecting anyway? Poor ministers? You must be joking. You don’t spend a lifetime in politics to die in penury – not in our part of the world anyway. Not unless you are Pushpa Kamal Dahal ‘Prachanda’.

It would seem that our PM has fallen on hard times, if one were to go by his property details. His self-declared poverty has already been the subject of much ridicule on social media. In all honesty, our first reaction should have been one of outrage but instead, for the majority of us, it was one of unbridled laughter owing to the absurdity of the revelations. If Prachanda is poor, then our other politicians must all be positively destitute in comparison.

A lot of eyebrows were raised when the Late PM Sushil Koirala made his modest property declaration a couple of years ago, but the public were inclined to believe him. Mr Dahal, however, is quite another cup of tea. One can’t help but think that it must be a mistake and perhaps, our PM had forgotten to check under that huge bed of his.

On the other hand, it might not be a mistake, having been done like most of his other endeavors, with a noble intention – in this case to give us all a laugh during these stressful times. If it’s laughter that he’s after, he should also extend this declaration scheme to Sujata Koirala, Ram Baran Yadav, Lokman Singh and all our dubious ‘netas’ both within his party and beyond. I can guarantee you that if and when the details do emerge it will be a proper laugh riot and perhaps then we can all sit like the PM, hands on bellies and laugh exclusively with our shoulders.

Jokes aside, this entire process of declaring property details is supposed to ensure transparency but it really doesn’t – not when people like our PM can blatantly insult our intelligence with preposterous declarations like this and get away with it. What’s more, in Nepal property or assets that need to be concealed are often scattered further away than immediate family – think cousins, in laws, family friends – with the knowledge that it is safe in their hands. This is truer for politicians because their election is usually a harbinger of happy days for their distant kith and kin who fully expect to prosper during this period and are only too willing to oblige with favors (concealing or holding assets) in return.

In any case, the discovery of any discrepancies between assets and known sources of income wouldn’t amount to much because the body in charge of investigations into the misuse and abuse of authority is itself in limbo and despite repeated requests, its head has yet to – you guessed it – submit his property details.

Well, even though all of these declarations may not do much for transparency, it has its positive sides because at the very least it allows us to see who can and cannot afford their own healthcare costs. We now know that Bimalendra Nidhi is very rich and can afford his own treatment expenses. He won’t have to go through all the cloak and dagger stuff he went through when sanctioning expenses for Sujata Koirala. But you never know with our politicians.

Given their penchant for freeloading and a sense of entitlement that runs through our entire political elite, all of them (the rich ones particularly so) may eventually rely on state largesse for treatments. Now, we can be sure that at least our PM certainly will because one kattha of land and three tolas of gold isn’t sufficient to get anything done these days.
Perhaps the public should launch a donation drive for our PM because once his tenure is over (and it will be soon to make way for ‘Pajero’ Deuba), it seems like he doesn’t have much to fall back on unlike the other ‘netas’. With so many rich ministers around, you wonder if the oft repeated phrase about Nepal being a ‘poor country with rich people’might just be true. Although, not all of us are rich. Just ask our PM.

Your own ‘Chakka Panja’

It seems that everyone wants to make movies in this town. Yes, Chakka Panja made a lot of money and... Read More...

In a tit-for-tat move, NCP's Dahal-Nepal faction asks Nembang to resign from post of deputy parliamentary party leader
11 hours ago

Hours after their first formal dialogue, government and Chand-led CPN hold second round of talks
10 hours ago