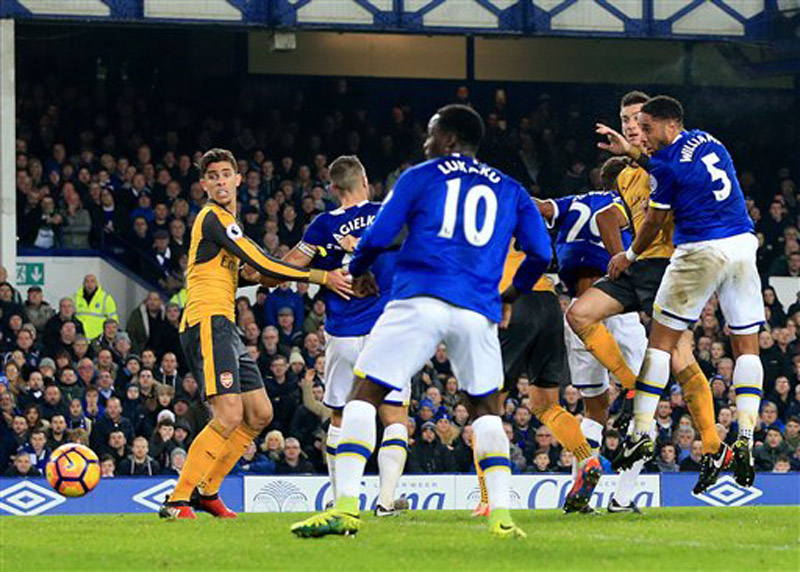 ENGLAND, Dec 14: With the tackles flying in and the noise levels ramping up inside Goodison Park, Arsenal's players faced a huge test of their Premier League title credentials in the final minutes of a tight game against Everton.

Ashley Williams headed home an 86th-minute winner on Tuesday to earn Everton a 2-1 victory and end Arsenal's 14-match unbeaten run in the league. A win would have lifted Arsenal into first place.

In the end, it was poor marking from two crosses that proved Arsenal's undoing.

Leading through Alexis Sanchez's deflected free kick — his 12th goal of the season — Arsenal conceded an equalizer just before halftime when Everton's full backs combined, with Leighton Baines crossing for Seamus Coleman to head home unmarked in the middle of the area.

Everton's winning goal also came from a curling cross into the area, with Williams rising unchallenged to meet Ross Barkley's corner. Williams' last goal was also against Arsenal, back in March when the Wales defender was a Swansea player.

Arsenal missed the presence and positioning of Shkodran Mustafi, the Germany center back who was injured in the 3-1 win over Stoke at the weekend and will be sidelined for the next three weeks. Arsenal has lost three matches this season — twice in the league, to Liverpool and now Everton, and against Southampton in the League Cup — and Mustafi didn't play in any of them.

Wenger's team also lacked spark going forward, which was surprising considering Arsenal arrived at Goodison Park in free-scoring form with at least three goals in each of its last three games. On tough nights like these, Arsenal also missed the creativity in central midfield of Santi Cazorla, who is also injured.

Everton has been Arsenal's most obliging opponent in the Premier League's 24-year history, with the Gunners winning the fixture 29 times and with just one loss in the past 18 meetings.

Not this time. Not when the atmosphere is like it was in the final 10 minutes.

"We came back with great character," Everton manager Ronald Koeman said. "If you show that aggression and commitment, it is difficult to beat Everton at Goodison Park."

There was even room for Koeman to aim a little dig at Wenger following the Arsenal manager's criticism of referee Mark Clattenburg. "I am not surprised about Wenger and his comments," Koeman said. "It's the third time in a row I won at home against Arsenal and three times in a row it was about the referee."

There was one more match in the Premier League on Tuesday, with Leicester continuing its poor away form in its stuttering title defense:

Marc Pugh's 34th-minute goal consigned Leicester to a seventh loss in eight away games this campaign. The champions drew their other away game, at Tottenham.

Leicester failed to build on its 4-2 win over Manchester City on Saturday, with Pugh scoring on the rebound after Benik Afobe's shot was parried by goalkeeper Ron-Robert Zieler.

"The result is too severe against us because we created more chances than Bournemouth," Leicester manager Claudio Ranieri said. "I wanted a little more."

Bournemouth manager Eddie Howe described his team's defensive effort in the second half as "heroic."

Leicester stayed in 14th and four points above the relegation zone, having played a game more than the teams below the Midlands club

The 16th round of games continues with first-place Chelsea looking to go six points clear with a win at last-place Sunderland.

In other standout games, Manchester United visits Crystal Palace, Manchester City looks to recover from back-to-back losses in a home match against Watford, and third-place Liverpool travels to Middlesbrough.

Real Madrid will not conserve energy against Borussia Dortmund despite having already qualified for the Champions League last 16 and... Read More...