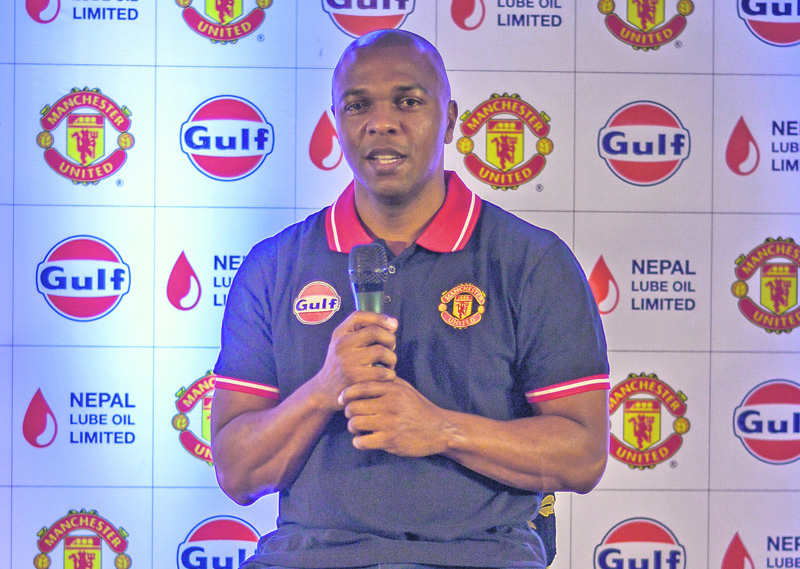 “It was pretty clear after Alex Ferguson's retirement that Manchester United would struggle and any manager coming in as his replacement would take time to succeed,” said Fortune, who arrived in Kathmandu on Tuesday.

The South African midfielder, who played seven seasons at United from 1999 to 2006, is in Kathmandu for the product launch of the Nepal Lube Oil Limited's Gulf brands lubricants.

“During Louis Van Gaal's tenure, United used to play different type of football. Now under Mourinho, it has different style of playing. Mourinho bought some exciting players in summer, he has great players at his disposal at the moment but it will take time to take the club at the height that fans want to see,” said Fortune, responding to the question that how he feels to witness his former club struggling at the moment.

Fortune, who has won 46 caps for South Africa, expressed optimism over United's chance of doing well this season. “It's very early stage of the season and the club has played just 15 matches. There is still a long way to go. I am hopeful that United will finish this season strongly,” said an optimistic Fortune.

Fortune also said that Mourinho needs to make new signings to strengthen the squad in future and he would love to see the Portuguese tactician sign Borussia Dortmund striker Pierre-Emerick Aubameyang.

“United has talented players but I would want Muorinho to add Aubameyang in his squad as the Gabonese striker is very fast and skillful. I think he will form a very good partnership with Mkhitaryan which will be fruitful for the club,” added Fortune.

Fortune, who won Premier League title in 2002/03 under Alex Ferguson, also revealed that the Scottish manager would make informal talks with the players rather that tactics at the dressing room before the matches.

“To ease the pressure of the players before the match, he used to make informal talks with us. He used to ask about our family. He was a great human,” said Fortune, who has played 126 matches for United including 76 in premier league.

Fortune, who retired two years back at fourth-tier English club Doncaster Rovers, had started his professional playing career from Spanish club Mallorca in 1995.

Praising the former United legendary manager, Fortune said that Ferguson had great management skill given his habit of treating all the members of the English club equally, including grounds-man to players to make feel that everyone is part of the family.

“He used to talk to every single person at the club. He always tried to create family environment at the club,” added Fortune.

On the same occasion, Fortune also said that he is looking forward to discover Nepali culture and food during his stay in the capital.  Fortune will interact with Manchester United supporters on Wednesday.

LONDON, Dec 15: Manchester United manager Jose Mourinho has been asked by the Football Association to explain comments he made... Read More...