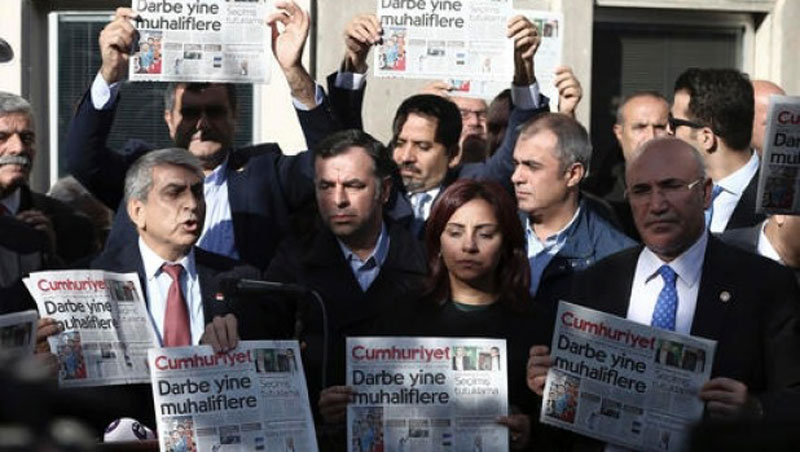 More journalists have been jailed this year by governments around the world than at any time in nearly three decades, primarily because of the crackdown in Turkey after a failed coup in July, the Committee to Protect Journalists said on Tuesday.

At least 81 journalists were imprisoned in Turkey as of December 1, all facing anti-state charges, said the non-profit group that works to defend press freedom.

“In Turkey, media freedom was already under siege in early 2016, with authorities arresting, harassing, and expelling journalists and shutting down or taking over news outlets,” said the group’s report on its annual census of imprisoned journalists.

Written by Elana Beiser, the report said a total of 259 journalists were jailed around the world, compared to 199 at the same time last year. That is the highest number since the group began keeping detailed records in 1990. The numbers do not include journalists who have disappeared or are held captive by non-state groups.

A state of emergency is still in force in Turkey following the July 15 coup attempt and the resulting government crackdown on alleged coup sympathisers has landed thousands in jail and forced tens of thousands of people from their jobs. Critics call the move a witch hunt.

Western governments, human rights group and legal experts have repeatedly expressed concern over events in Turkey, which was once hailed as a model of Muslim democracy.

Even before the coup attempt, the rate of press freedom violations in Turkey spurred the Committee to Protect Journalists to launch last March a special diary called “Turkey Crackdown Chronicle.”

The group said that after Turkey, the worst offender in 2016 was China, where 38 journalists were in custody on December 1. China had jailed the most journalists worldwide in the previous two years.

“In recent weeks, Beijing deepened its crackdown on journalists who cover protests and human rights abuses,” the report said.

Egypt was at the third place, with 25 journalists incarcerated.

This year marked the first time since 2008 that Iran was not among the top five worst offenders. The report said that is because many of those sentenced in a post-election crackdown in 2009 have served their sentences and been released.