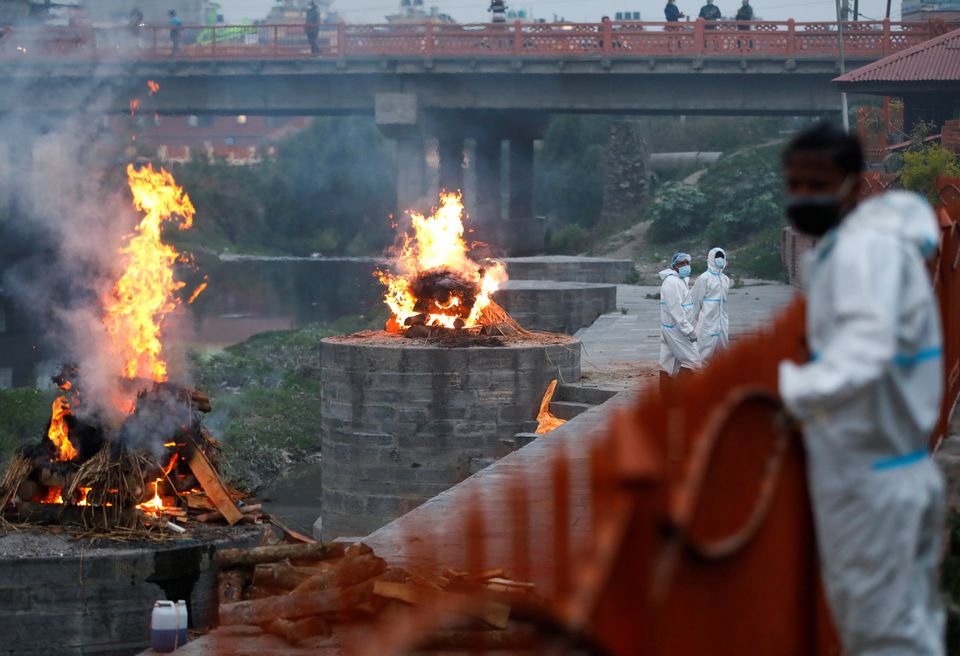 Bodies of coronavirus disease (COVID-19) victims are cremated on the bank of Bagmati River as the country recorded the highest daily increase in deaths since the pandemic began, in Kathmandu, Nepal May 3, 2021. REUTERS/Navesh Chitrakar

"People who have already got the first dose will be in difficulty if they don't receive their second dose within the stipulated time," said Samir Adhikari, a senior official of the Ministry of Health and Population in capital Kathmandu.

Nepal, wedged between China and India, has already vaccinated more than two million people with the AstraZeneca vaccine provided by India and China's Sinopharm.

But authorities were forced to suspend the vaccination programme last month after the country failed to secure fresh dispatches of vaccine from India and China.

"I would like to request our neighbours, friendly countries and international organisations to help us with vaccines and critical care medicines ...to support ongoing efforts to combat the pandemic,” Oli said in a televised address.

Oli said officials were in contact China and Russia and other manufacturers to urgently secure vaccines.

Oli, who has been criticised for doing little to contain the pandemic, said vaccines and critical care medicines were "global goods" and that every one should have access.

Weeping relatives offered last respects to their loved ones as crematory workers lifted bodies for open air cremation on the bank of Bagmati river near the Pashupatinath temple, the biggest Hindu shrine in Kathmandu.

Crematory workers say they were stretched as the flow of dead bodies had increased with the recent spike in deaths.

KATHMANDU, August 11: The government has signed an agreement with the Asian Development Bank (ADB) to receive a subsidized loan of... Read More...

It is high time Nepal not only said “Yes” to the Sputnik V vaccine, but also took a bold step... Read More...