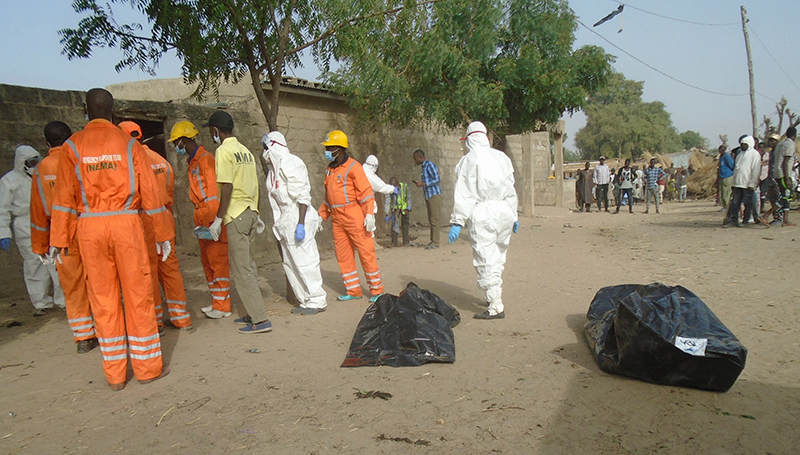 The city is the birthplace of the Islamic insurgency and the headquarters of the military campaign to halt it.

Residents awoke to mighty explosions around midnight. Three female suicide bombers blew themselves up at a truck station, detonating vehicles at Muna Garage on the city's eastern outskirts, according to police Deputy Superintendent Victor Iskukwu. Muna Garage has been attacked many times in recent months.

"Most of the trucks that were loaded with goods for export to Chad and the border communities were destroyed, along with commodities worth millions of naira," Ibrahim said.

One blast occurred as people were trying to board the trucks, said resident Isa Mamman.

The attack also targeted a military checkpoint, according to Ahmed Satomi of the Borno State Emergency Management Agency.

Soldiers later fired at gunmen on motorcycles escorting other suicide bombers, killing at least six of the bombers.

A multinational force of troops from Nigeria and its neighbors last year drove Boko Haram out of towns and villages in northeast Nigeria, but isolated attacks and suicide bombings continue.

The seven-year Islamic uprising has killed more than 20,000 people and driven 2.6 million from their homes, creating the worst humanitarian crisis on the continent with millions facing starvation.

MAIDUGURI, Nigeria, August 26:  Boko Haram extremists killed at least 27 people by shooting them and slitting their throats as they... Read More...

ABUJA, Oct 17: Joy, jubilation and dancing erupted Sunday when a group of Nigerian parents were reunited with 21 schoolgirls... Read More...

PHOTOS: Kathmandu during rain
11 hours ago

Citizenship at 77!
8 hours ago