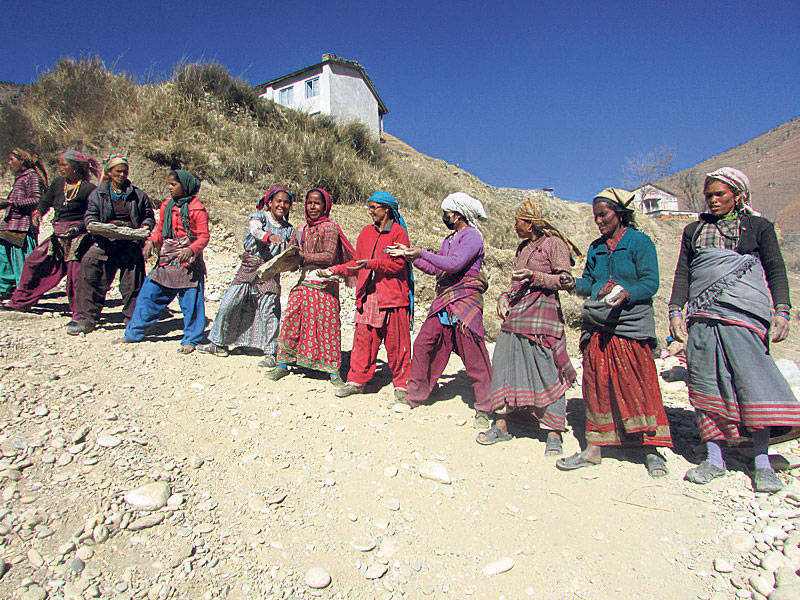 JUMLA, Dec 11: Lakshima Kathayat who is already 60-years-old has been working actively in the construction of a local road. It’s not a work that she feels comfortable to do, but she can’t excuse herself from it. “As there are no boys and men in the village, women even older ones like me, have to work in construction sites like this,” she said adding that “It’s Kalapahad season and all the males have gone to India.”

People in Jumla and adjoining districts in Karnali are very familiar to the word ‘Kalapahad’. Whether they love it, or hate it, Kalapahad is an inevitable part of their lives. Their economy is largely supported by it. “In winter, our men go to Kalapahad (India) for earning a living for the family. Whatever they earn during the few months of their stay there caters to family’s annual needs. If for any reason, they cannot go, starvation is imminent,” explains Kathayat, whose son had recently left for Kalapahad.

From around the first week of December till the end of February men from the region migrate to India. They mostly go to Simla, Garhwal and Dehradun of India to work as porters and laborers. The name, Kalapahad, seems to have been kept because of the black mountains that the men had to trek for reaching out to Indian towns in the past, when the road transportation was not available. Some locals even call this migration trend as ‘Kalipari’ - across the Mahakali River. Kathayat was also altering between Kalapahad and Kalipari while narrating about the seasonal migration of Karnali men to India during the winter and sometimes during summer.

“If we had enough work here, our men would not have to go to Kalipari for feeding the family.” Along with winter, men here head for Indian towns in summer, mostly during July.

After working through out the rainy season, they return home during Dashain and Tihar. “Family members always remain on the look for their return during the festival season as they bring new clothes and other essential commodities for the family,” Kathayat explained.

Construction of the road in her locality has been delayed due to lack of men to work. Not only roads but other developmental projects like this across the region have been affected due to absence of males. “Our men remain in Kalapahad for over six months in a year. And because of that women mostly work in farms and in other fields like road construction,” Kathayat informed.

Though most men return with earnings that more or less meet the family’s demand, some return empty-handed. “Men who have drinking habits rarely bring back money home on their return. But still sending our men to Kalapahad is the best thing we can do for meeting family expenses,” she said.

Kathayat’s neighbor Chimsi Kathayat, 47, like other women in the village actively performs the role of a male for her family. Her husband works in Shimla. “When our men go to Kalapahad, only women are left in the village. So we do all the work in every field- be it road construction or farming or be it cremating a deceased,” Chimsi added.

Though women perform almost all the functions of men in the latter’s absence, it is during cases of emergencies that men are missed most acutely. “Normally, women handle everything. However, during emergencies, like in case of deliveries and other medical emergencies when patients have to be taken to hospital for medical care, we miss our men and wish they were with us.”

Along with social life, the seasonal labor migration affects Karnali’s schools. Due to insufficient number of teachers and students, only few schools operate during the farming season. Principal of Saraswati Higher Secondary School, Badri Narayan Yadav, informed that Kalapahad affects the education calendar every year.

“Students don’t come to school regularly. Some even go to Kalipari for work. Its more of a compulsion for them then a choice to fight against poverty!” he said. “Women are the ones who dig, clear debris, construct roads, carry goods and do the farming work. Men are often not seen here,” he remarked.

According to Sarki Budha, 55, who has life-long experience of ‘Kalapahad’, working in India is a must to feed family members. “Our family would die of starvation if we don’t go to India and earn. We sell our sweat and blood there and get some money back home,” he said. “I had gone there for the first time when I was 12. Since then I have gone regularly throughout my life.”

As part of the Karnali Employment Project, road worth Rs 1.1 million rupees is under construction in Kadari village. According to Budha, most of those who are contributing labor for the road are women and elderly people. “We are constructing road from Kadari to Saraswati School. As young men are in Kalapahad, elderly people like me and women are constructing the road,” he said. 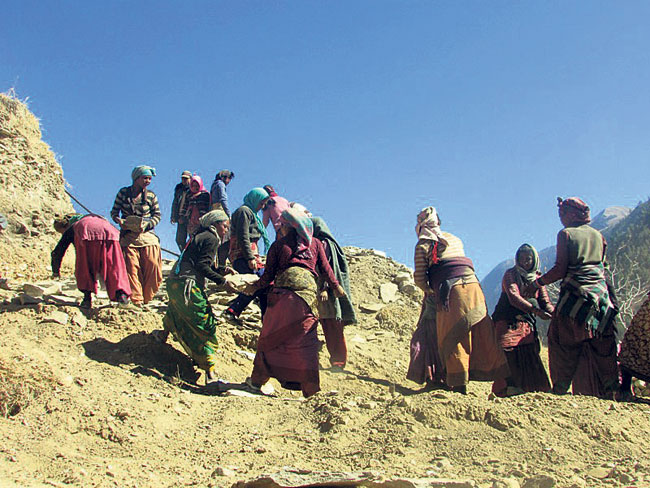 SURKHET, August 20: The local residents of two villages in Panchapuri municipality located in the western part of Surkhet have... Read More...