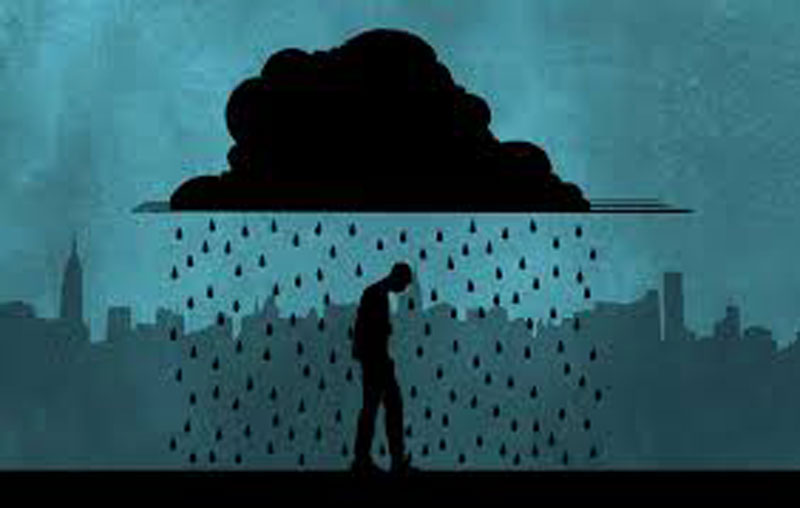 Although clinical depression can be cured by psychiatrists, I personally believe depression cannot be cured by another person or chemical substances. It can be minimized to an extent but complete cure is certainly not possible as it involves someone's thought patterns.

It was about six months ago when I started viewing the world with a completely different perspective. Everything seemed colorful up until then and in no moment, the colors faded away. It was just as if someone added a grayscale filter with 100 percent intensity to my life. With no traces of colors, I felt empty. The void inside me grew larger with every passing second and the fact that I had no one to share it fostered it at a faster pace. A feeling of constant sadness for no reason and the lack of interest to do anything had become an inalienable part of my daily life.

One cold-winter afternoon, I was alone - scrolling through my feed when an idea struck my mind. The idea was nothing. Yes, I might sound completely stupid here but the idea that struck my brain was completely nothing. Nothing yet something was lagging my mind, and with running chills down my spine, I went to the bathroom and stood there for about five minutes staring at the wall. I returned to my room, rolled my left sleeve upward, took a blade and started inscribing random words on my arm. At that particular instant, I had absolutely forgotten something like 'pain' even exists.

When I was just done with inscribing, I grabbed my mom's shawl, tied it to the ceiling fan that seemed so intriguing and inviting. I put the shawl around my neck and lifted my feet off the chair that was supporting me up until yet.

For your clear information, I did not die that day either. I'd be invited by the fan but my inner-self always resisted accepting the invitation. It was not like I never accepted, just as above, I did, a lot of times but I never died.

This is not just my story. If you pressurize your brain to remember really hard, you might have a similar story.

The National Institute of Mental Health estimates about 16.2 million adults just in the United States of America suffer from various mental health issues, according to their 2016 statistics. The report also states the 'disease' being the most common in the ages between 18 to 25.

According to a famous English dictionary Merriam Webster, the word "depression" limns to "a mood disorder marked especially by sadness, inactivity, difficulty in thinking and concentration, a significant increase, or decrease in appetite and time spent sleeping, feelings of dejection and hopelessness, and sometimes suicidal tendencies".  Some other dictionaries simply translate the vast term to "sadness".

So what actually is this weird feeling of intense craving for pain and suffering and even death? The simple single term 'depression' is incapable of explaining everything as such mental health issues range from relatively minor symptoms like loss of appetite to schizophrenia. Experts believe the issues not being a result of a single event but from a series of traumatic mixtures of unwanted, unimagined, and unasked moments in one's life. Call me an expert, because I believe the same.

When you return after a long and tiring day and your beloved dog does not come to receive you at the door, you feel empty. Is it that you're depressed?

It is totally fine to feel low at such times. Once the sadness becomes persistent, affecting your daily life, it might be clinical depression, which can be cured by a consultation with a therapist, the intake of prescribed antidepressants, bringing changes to your food habits and lifestyle, and so on.

Besides these highlighted topics, anxiety is yet another utmost disorder.

As discussed earlier, 16.2 million American adults suffer from major depression while the statistics of countries like ours are yet to be documented. People victimized by major depression experience its symptoms almost every day, every moment. Similar to the rest of the mental health issues, it has a lot less to do anything with everything that's going on around. One can have a decent job, a loving family, a magnificent future plan, and still be haunted by depression. The most severe form of depression affects one's daily life, stealing proper sleep and appetite followed by constant fatigue, the complete absence of concentration. A feeling of self-worthlessness comes with every inhalation of oxygen. Thoughts of self-harm and suicide poke like nothing else.

Persistent depression is identified by lack of enjoyment, deep sadness, and a feeling of hopelessness, inability to work properly and social withdrawal.

Psychotic depression is a bit different from the rest and comes with the symptoms of major depression along with paranoia and delusion.

Identified more than a century ago, schizophrenia is a major psychotic disorder that compels its sufferers to believe in things and powers that don't exist. It is considered as a syndrome that exhibits similar symptoms in victims but the causes do vary. Chances of genetic transmission of schizophrenia to a closely related relative is about 10 percent while the graph moves up to 40 percent in identical twins. Sudden personality change, development of extreme irritability and unusual speech disorders are its primary symptoms. Even exposure to viruses during infancy could trigger schizophrenia in a person.

A feeling of overwhelmedness, or hopelessness, transformation of lifestyle with changed appetite, and sleep habits, anxiety, frequent irritability, over-sensitiveness to criticism are the common symptoms of the most forms of depression.

The causes of depression vary from person to person. It does not necessarily surround the victim in his/her daily social life.

Research suggests long-term unemployment, self-isolation, prolonged work-stress and abusive relationships are the major factors that usually trigger one to be depressed. These are the causes that are generally seen in adults but what causes teen-depression? Like a normal human person, you might think that a teenager has no significant social responsibility to fulfill, no stress of earning and providing the family with financial support, and so on and hence no teenager must suffer from depression.

The phase actually undergoes the highest degree of suffering in relativity with a human life. Unmanaged education system is one of the major causes of teenage depression. A child is born and s/he is admitted to a school. S/he is forced to learn alphabets of some other language (in our context) way before s/he could even speak his/her mother tongue. Before the child learns to take care of himself/herself, the child is forced to learn about the big shots who significantly did nothing to improve the living standards of the child. Long before exploring his/her interest, the child is enforced like a slave.

As the child eventually grows up to his/her teenage, the unmanaged 'incredible' schooling pressurizes to do what they wish and never ask for their students' opinions on how to improve the system for enhancing proper growth and development. The student never gets proper time and support to do what pleases him/her, acquiring knowledge about his/her interest traversing his/her brain.

Parental support lacks the most. With a generation gap comes a contrast in thinking pattern. Conflict arises when 'unmatching' thoughts strike each other. When a parent cannot understand his/her child's status of mental well-being, it pushes the child into sadness. The feeling of loneliness and "there is nobody for me" hit hard, leading one to drug abuse and suicide. This phase is the most sensitive phase in a human life as incoming and outgoing of temporary people hampers the psychological state as well.

Apart from these, every minor thing might trigger depression as it is the result of a series of events.

Trauma could be one's part of life but s/he will not share it with anyone. What would ever happen if you share your pain with someone else? Would it change anything in your life? Nothing will drastically change but you'll be ashamed now because another person knows about your suffering. This tendency of depressed people keeps them always smiling and happy in front of a mass - never letting anyone of their inner bruises.

Besides psychological effects, chronic depression can change the physical structure of the brain causing inflammation and oxygen restriction. In fact, depression can completely take over one's central nervous system forcing one to believe his/her inferiority which eventually impacts the personal appearance of the victim. I have seen very charming people being swallowed by ugliness. Untreated depression brings unimagined physical changes like extreme weight loss or gain, facial deformation and what not.

Although clinical depression can be cured by psychiatrists, I personally believe depression cannot be cured by another person or chemical substances. It can be minimized to an extent but complete cure is certainly not possible as it involves someone's thought patterns. It is difficult to make changes in your thoughts, and how can you expect to do the same to someone else? The darkness that has swallowed someone is very difficult to get rid of. In most cases, it goes away with death but that certainly should not be encouraged.

S/he just tries to escape death throughout his/her life. Can you imagine how hard it would be for someone to want death? Wanting death is not easy, and one must feel the paramount pain and hopelessness to fight, and incredible tussle s/he undergoes inside the brain before finally being ready to give up on life.

Suicide helplines that claim to offer "empathetic ear and emotional support" should not just wait for someone to call them at their worst. Campaigns to raise awareness about mental health should be conducted throughout the globe. Parents must realise their children's changes and act accordingly, providing them with love, care, and support. I seriously don't know the measures because if I knew, I'd prevent myself from being haunted.

Counting of votes resumes in Udayapur-1, UML boycotts
10 minutes ago