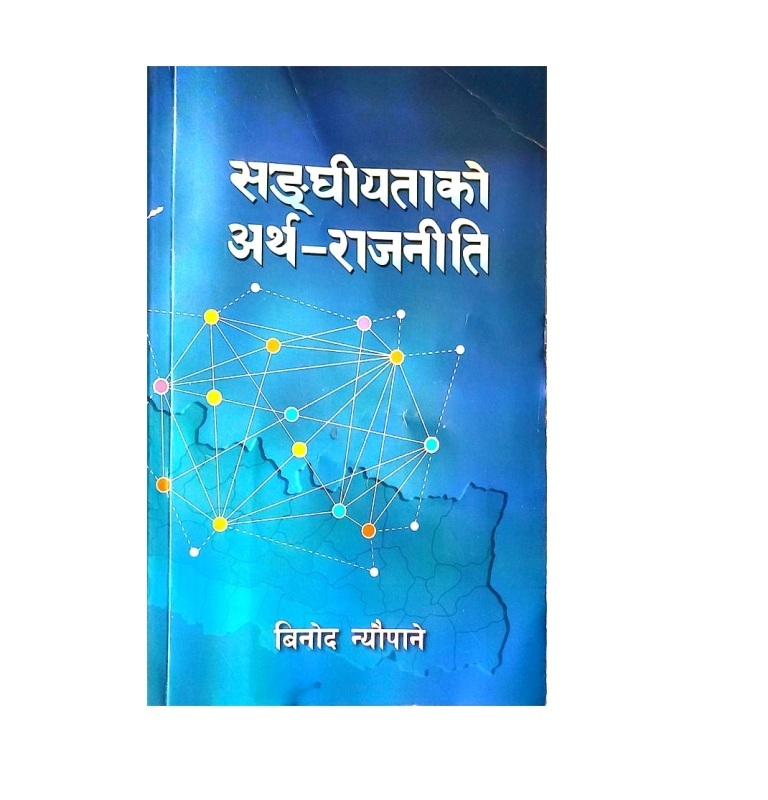 Sanghiyata ko artha rajniti (political economy of federalism) is a book penned by Binod Neupane. The second edition of the book authored by Neupane, who is well-versed on models of federalism, decentralization and local development, hit the stands in August, 2020. The book primarily focuses on what challenges Nepal's federalism is currently facing and what measures should be taken to overcome them.

The 508-page book begins with the meaning and general definitions of federalism. Briefly touching on the form of federalism in the United States and European countries, the author jumps to explain Nepal's three tiers of government. In the viewpoint of the author, Nepal is practicing quasi federalism like that of Nigeria although the two countries have adopted different political systems. Taking the case of African country Ethiopia, the author warns of repercussions that a country could witness if it failed to properly manage ethnic federalism.

In the book, Neupane asserts that federalism was imposed on Nepal at the behest of external forces. Neither a referendum was held nor did the political parties feel the need to consult the people on federalism. "The success of federalism can be judged only by analyzing how power is devolved to provincial and local levels. Quasi or complete federalism both can lead to disintegration of nations," Neupane observes.

Although the author has not explicitly talked about gerrymandering in the course of state restructuring process, he precisely agrees that the current unitary form of governance in Nepal was introduced to serve interests and maintain dominance of a section of the political class.

In different sections of the book, the author has repeatedly questioned the sincerity of the political leadership. Although Nepal started practicing decentralization a long time ago, it was institutionalized through the constitution. He also touches briefly on the trends of globalization and local development. However, he feels that they cannot go together side by side.

Even as the term "prosperity" or samriddhi became a buzzword in the Nepali society after 2015, the author points out that Nepal's road to perpetual peace, good governance, sustainable development and prosperity is not easy due to deep-rooted corruption, misleading development approach, growing trade deficit, and unaccountable leadership.

Taking the case of the 2015 economic blockade imposed by India, the author raises questions on the loyalty of the Madhes-based political parties to the country. He says that the Madhes-based political parties who first championed the issue of federalism have made it a tool for attaining power. He observes that they themselves were not clear about their agendas when the Madhesh movement began in 2008. Another serious issue the author mentions is those who provoked the agenda of social disintegration are now seen as the primary defendants of federalism.

The author has stressed the need for the purification of political and administrative leadership to bring about drastic changes to the country's socio-economic development. As ordinary people raise questions on the sincerity, efficacy and dedication of the political leadership, the book also concludes that political leaders are largely blamed for the country's social and economic backwardness.

In the new federal set-up, the inter-governmental coordination between the federal, provincial and local governments is highly crucial. There is a lack of strong collaboration between the bureaucracy, political parties and local representatives, resulting in an inordinate delay in the construction of development projects on time. Frequent transfer of civil servants is seen as another major problem in the new federal set-up.

Corruption is rising in every sphere of the government from federal, provincial to local. The Nepali society witnessed rampant corruption after 1990's political change as politicians and bureaucrats proved themselves less accountable to the people. Even though corruption prevailed during the 30-year Panchyat period, the author has stated that it effectively flourished after 1990. He has pointed out that government agencies have turned into Ghus Addas (corruption units) although they are supposed to provide effective public service delivery and contribute to good governance. One can't differ with the author's argument that petty corruption at every tier of the government has gone unchecked for years due to a strong nexus between bureaucrats and Bichauliya (middlemen).

Another burning issue the author has repeatedly mentioned in  the book is that a strong nexus between bureaucrats, politicians and middlemen has caused an inordinate delay in executing the development projects. Going further, he says there is huge influence of foreign companies in the political and bureaucratic circles. They are ready to pay millions of rupees in bribes to get projects awarded to them.

Social disintegration, social inequality, poverty, infrastructure gap, less industrial development, acute unemployment and growing economic dependence on foreign countries are some major problems that Nepal is currently facing. In the book, incompetent political leadership's lack of clear visions; strategic planning and roadmaps for economic development have been taken as some of the reasons for little economic development in the country. The current approach of social inclusion adopted by Nepal can't address the genuine concerns of the marginalized groups including Dalits, he opines.

The book is not just focused on federalism and its challenges, it also suggests how Nepal can fulfill its socio-economic objectives. In the chapter titled " proximity, connectivity and development", the author says that enhanced railroad connectivity will help spur economic development in the country.

Talking about geo-economics and geo-politics of Nepal, the author says that the Nepali leadership is failing to reap benefits from the economic rise of the neighboring countries China and India. In this context, the author looks upbeat about economic benefits that Nepal can attain through China's ambitious One Belt One Road Initiative (OBOR), later renamed as the Belt and Road Initiatives (BRI). The author critically views India's geo-political interests in South Asian countries including Nepal and Pakistan, which often sees China's rise as a threat to India's national security interests. Linking it with the Nepali context, the author argues that Nepali politicians and bureaucrats are largely influenced or guided by Indian policymakers and intelligentsia who mostly view Nepal through the lens of national security.

To conclude, the book is useful for all — from the ordinary readers to those who want to know Nepal's federalism and its contemporary challenges. The author looks more critical of the ill-practices of federalism, asserting that the country might see a split if the policymakers failed to manage this system of governance properly. The author's back-to-back opinions or observations inside the book make the readers irritated. He could have expressed his own opinion on federalism in a more organized manner. The most lacking point is the author fails to suggest what sort of federalism Nepal should have adopted.

Government will be severe against corruption and monopoly: Home Minister Thapa