Can the Quad be a reasonable means for Indian strategy? 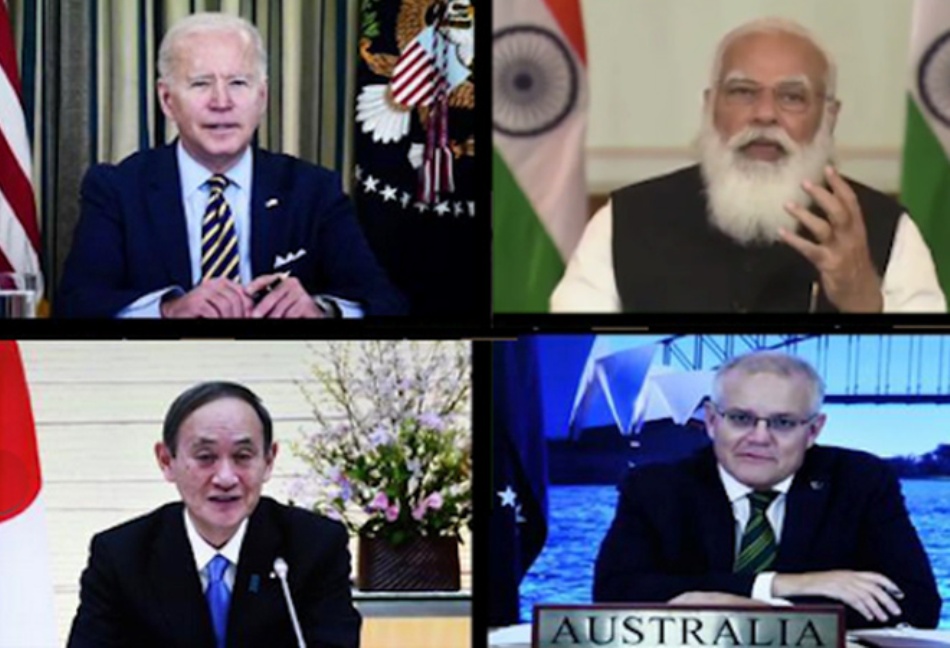 China remains the largest trading partner of all the Quad members, including India. Japan and Australia would not sacrifice their economic interests just for American or Indian interests.

The four leaders—US President Joe Biden, Indian Prime Minister Narendra Modi, Japanese Prime Minister Yoshihide Suga, and Australian Prime Minister Scott Morrison—recently published a joint opinion piece in The Washington Post, after taking part in virtually organized Quadrilateral Security Dialogue (Quad) Summit, affirming that they have a shared vision for a 'free, open, resilient and inclusive Indo-Pacific region.' It looks the latest Summit gave the Quad some momentum after the long-haul, which was conceived during the Indonesian tsunami in 2004, then initiated through the ASEAN Regional Forum in 2007, and again was revived in 2017. The Quad is perceived as a part of the broader effort to balance the growing economic and military power of China in the region. On the other hand, China has been cautiously monitoring these developments. Before the Summit, the official spokesperson of China's Foreign Ministry said: "We hope the relevant countries will keep in mind the common interests of the regional countries."

Apart from the free and open region, the op-ed piece emphasized the two fundamental current priorities of the Quad as "ending and recovering from the pandemic and standing up to climate change." We can as well draw two clear inferences from the commitment made. First, the US and its Quad partners are competing with China in Covid-19 vaccine diplomacy to win the hearts and minds of the global community, especially in the Indo-Pacific region. Second, closely linked to clean energy and the Paris Agreement, the Quad members are trying to secure a supply chain of rare-earth materials, 85 percent of which comes from China. Purposefully, India has been kept at the front and center of the race with backing from the US and other members. The leaders have pledged to boost India's vaccine production capacity to yield one billion doses by the end of 2022. Regarding the rare-earth materials used in everything from high-tech electronics to military hardware, the US is trying to find the right strategy to avoid the "vulnerability that can be exploited by China in the event of a clash between China and the West." The time will tell how far the Quad can compete with China on these two fronts, but what is sure for now is that the security 'alliance' is focused on soft power competition in geo-economics terrain.

India aims to reap the economic benefit by harnessing two global economic powerhouses associated with the group—the US and Japan. Delhi's desire fits into Washington's strategy to check China's rise through the trade war and containment. However, the promotion of Quad is just one of the stepping stones of the US strategy in great power competition in the Indo-Pacific region, where the US will undoubtedly use all of its instruments of national power, including the military. On the contrary, India does not aspire to be a US ally amid the US-China rivalry. Instead, it intends to maintain its strategic autonomy as it had done during the Cold War. Would India be able to walk a tight rope this time, especially when one of the opponents of the great power competition is its next-door neighbor and unstoppable rising power, and another is a shrewd international top dog pursuing India for its strategic ends in the Indo-Pacific region?

This time, it appears, India wants to take full advantage of this opportunity, seeking economic and financial gains and realizing its long-cherished ambition of becoming a regional power. Since this Indian interest intersects with the US, and the US desperately needs India for its strategy to succeed, the US persuasion is tempting to India. Policymakers in India believe that without forming a formal security alliance with America, they can create a balance of power with China and make much-needed economic progress for its impoverished population—killing two birds with one stone.

Modi government is trying to channelize the foreign investment to India that is moving out of China due to the Trump era trade war between the two giant economies. India knows that the trade war will not end soon because the US does not prefer to use its military as a primary instrument to counter China until it exhausts its economic tools. Delhi also believes that it can balance the current lopsided power position with China by slightly tilting towards the US. Indian strategists might be thinking that this slight tilting would not bring all the negative consequences that otherwise surely bring while creating a military alliance with the US. Whether India could maintain a strategic equilibrium without invoking a security dilemma with this balancing act is crucial.

However, India is taking note that China is the overwhelming rising power militarily and economically. It is also well aware that the first step of fulfilling its big ambition is to prosper and pull its population up from the poverty-stricken abyss as quickly as possible. One of the most feasible and practical approaches to achieving this prosperity goal will be through collaborative trade and commerce with its adjoining neighbor and most prominent market, China. Deng Xiaoping once remarked, "I don't care if the cat is black or white, as long as it catches the mice." It seems India borrows from Deng's wisdom. Replying to the question of whether Chinese FDIs are welcomed in India, the principal economic adviser in the Ministry of Finance, Sanjiv Sanyal, recently said that "the government doesn't care which country—including China—manufactures buttons or anything else, as long as it brings FDI into India."

India cannot accelerate economic progress unless there is a good security situation with its neighbors. If India must compete with China militarily, it has to divert a significant portion of national resources to security, compromising its prosperity goals. India could become a tough military competitor for China but without much economic might suffering the similar fate of the former Soviet Union.

It appears India sees the Quad as a reliable means for its strategic dual ends—economic prosperity and regional hegemony—for a couple of reasons. First, it is not a security alliance like NATO and hence would not create a balance of power mismatch for India with China. Initially, there could be some ripple effects, but strategic equilibrium will not be disturbed much on the whole. Somehow, the four leaders' joint opinion piece in The Washington Post also corroborates this Indian belief as it neither directly mentioned China nor regional security. Second, through Quad, India could gain more advantage on the economic front by harnessing the US, Japan, and their Western allies while maintaining a viable trade and commerce relationship with China. Third, through the economic prosperity gained adopting this approach and conducive support from the US, India can sufficiently balance China without provoking severe security challenges.

Can the Quad be a reasonable means for the Indian strategy? It is a question worth pondering. Equally, it is unclear whether India could strike an adequate balance between Quad and Russo-Chinese-led mechanisms such as Shanghai Cooperation Organization (SCO) and BRICs.

The other three partners' perception of Quad is undoubtedly not the same as India’s, at least from their national interest perspectives. American main effort is to maintain its number one global position by slowing down China's rise using India as a counterbalance in the Indo-Pacific region. The Quad is just a quasi-alliance that might or might not turn into a full-fledged military alliance in the future, depending on whether India borrows a page from the American playbook or not. If not, the US needs to create another NATO-like security mechanism, in which case the Quad is likely to be eclipsed. Since the evolution of Quad into a security alliance is still doubtful, the US would not fully commit to it as the Indians are currently expecting. Americans hold all the cards to compete with China—Taiwan, East China Sea, the South China Sea, Hong Kong, and Uighurs, among others. Indeed, the US will try to orchestrate their strategy with different permutation and combination—synchronizing those that appear viable and discounting the rest not useful.

China remains the largest trading partner of all the Quad members, including India. Japan and Australia would not sacrifice their economic interests just for American or Indian interests. That is why Japan and Australia are in Regional Comprehensive Economic Partnership (RCEP) while India stayed away. There is a limit to how far the two countries can support the Indo-US undertakings in Quad and how much benefit they could extract. If they perceive the cost-benefit scale tilting on Chinese side, they will hesitate to place their bet on Quad. Even the US will not completely decouple from China because of the intricate economic interdependency and globalization, although the supply chain is being reworked. The globalization genie is already out of the bottle. The Cold War 2.0 between the US and China is unlikely, though some strategic pundits predict it would.

How all these interests crisscross at Quad and how far the politicization of vaccine would take this group has not been crystallized yet. Re-engineering geopolitical alignment in the Indo-Pacific region through the Quad with its current state is just the bridge too far. Most importantly, it is unclear whether Indian policymakers will be able to thread the strategic needle at the Quad, balancing Indian values and interests vis-a-vis US-China rivalry.

Democracy is the defense of Nepali sovereignty

While Nepali politicians remain motivated by personal gain, they have kept the great powers off balance. Nepal’s political uncertainties, and... Read More...

Maintaining a delicate balance between the immediate and extended neighborhood is the best way for Nepal to realize its national... Read More...

I have no involvement in making Hamal a minister: Chief Justice Rana
21 hours ago

Canadian citizen busted on the charge of pedophilia
4 hours ago

Agreement between Nepal Tourism Board and India's TAAI
5 hours ago

Danish tourist dies at Makalu base camp
5 hours ago

IN PICS: Farmers in Bhaktapur busy picking ‘makhamali’ flowers for Tihar
24 minutes ago

MCC will be endorsed only after consensus among major political parties: FM Dr Khadka
49 minutes ago