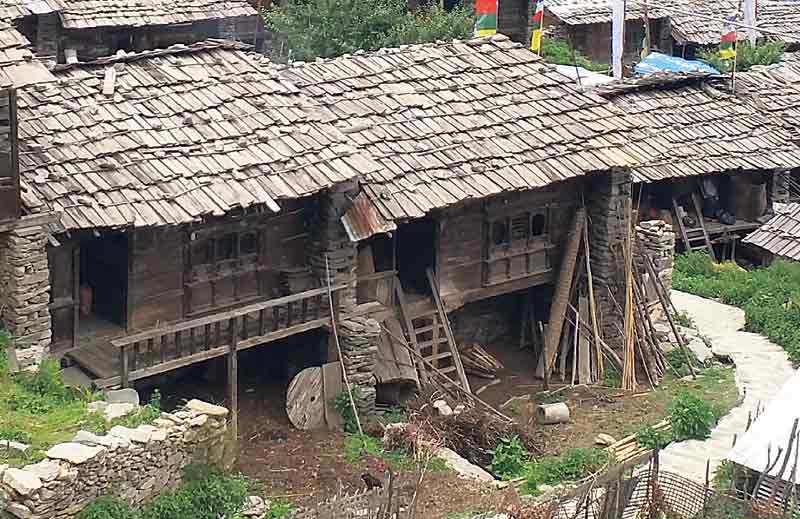 KATHMANDU, Dec 7: Technicians involved in reconstruction works have claimed that frequent changes in the provisions and policies on reconstruction, lack of adequate number of VDC secretaries and resource centers have affected the reconstruction process.

Engineer Keshav Oli, deployed at the Priti VDC in Ramechhap District, stated that the government had floated 17 house designs for quake victims to choose from while signing the contract. Though according to these designs rectangular house designs are not allowed, most of the quake victims have built their house in that shape, he informed.
“The designs floated by the government focus on building square houses. However, the villagers have built houses in rectangular shape,” said Oli.

Engineers and quake victims have recently faced another road block. In its recent directives, the government restricts the construction of attic in mud and mortar houses. But many of the quake victims have built attic in houses that are made of mud and mortar. As such provision was not present in the earlier directive, engineers remain undecided on approving such houses for receiving further installments of the grant.
“We were asked to allow up to 3 feet attic in the first directive but now it has been changed.”

Government initially had announced plan to set up one resource center for three to six VDCs to assist and monitor reconstruction works. But the plan was dropped later to cut down cost.

Engineer Bikash Pokhrel, who is stationed at the Talakhu VDC of Nuwakot, said the reversal of the plan confused the beneficiaries. “Quake victims were informed that the proposed resource center would provide them all state services for reconstruction. But when it was dropped they were forced to visit multiple public offices for information.”
Elaborating further on the way the government has changed the process time and again, Pokhrel said that the villagers were earlier informed that the beneficiary would be able to appoint a representative to receive the grant cheques if they cannot travel to district headquarters. This was denied later. “This was really painful for the elderly people who live in remote corners of the district,” Pokhrel added.

Over a dozen of engineers from several quake-hit districts had reported these issues to Ram Prasad Thapaliya, spokesperson of National Reconstruction Authority (NRA) on Sunday. Thapaliya conceded to the flaws stating that the reconstruction response is new to the country. “Yes, there have been changes in policies but it is because reconstruction is new for us and we have been doing this through a learning by doing approach.” he said.

Thapaliya tried to console them saying that NRA is mulling on setting up a communication unit at the center to provide timely response to ground teams in districts. Engineer Kapil Regmi, deployed at Gorsyang of Nuwakot said, “Before we reached the villages, some quake victims had built houses that have 9/12 pillar sizes. According to government standards houses with pillar system should have 12/12 size pillars. But since these were built before we reached the villages, we are confused on approving such houses for further grants.”

Another concern which the quake victims often ask to them, according to Regmi, is the date for receiving the second installment of the grant. But since they themselves don’t know, it has been hard for them to respond.

Engineer Govinda Bhandari, deployed at Gatlang of Rasuwa, shared problems faced in constructing wooden houses that were partially or fully damaged during the earthquake.
He said that even engineers lack proper knowledge on constructing earthquake resistance wooden houses. “And we don’t have a designated authority or person at the center to discuss such concerns,” complained Regmi.

The current global expansion will likely continue into next year but by 2020, the conditions will be ripe for a... Read More...

Shaking up the standards

Who knew a wholesome, creamy, flavored milkshake would be the best way to end a shopping spree. Keventers at LABIM... Read More...

Google sued by employee for confidentiality policies that muzzle staff

A product manager at Google has sued the company for its allegedly illegal confidentiality agreements, policies and practices that among... Read More...