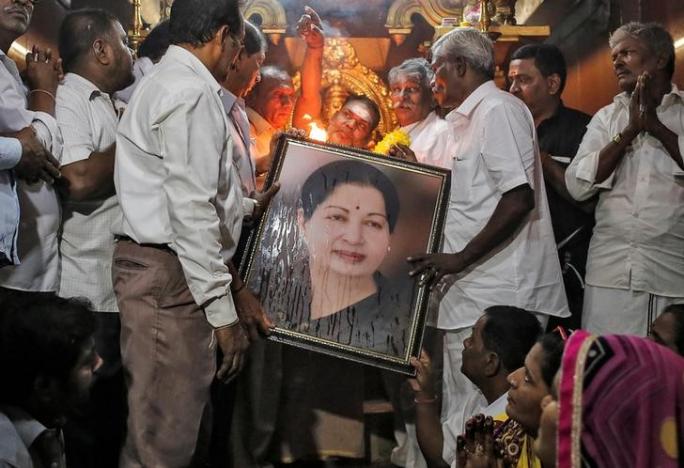 The life of the leader of Tamil Nadu hung in the balance on Monday after she went into cardiac arrest, drawing large crowds to the hospital where doctors were fighting to save the hugely popular former actress.

Jayalalithaa Jayaraman went into cardiac arrest on Sunday night, the Apollo Hospital in Chennai said, her condition deteriorating sharply after her admission with a severe respiratory ailment in September.

On Monday, the hospital said she remained critical and on life support systems as authorities in the state increased security around Chennai to prevent her worried supporters from creating public disorder.

Popularly known as "Amma", or "Mother" in the Tamil language, the 68-year-old was introduced to politics by her cinema screen partner, M.G. Ramachandran, another actor-turned politician, and went on to serve as chief minister of Tamil Nadu five times.

Jayalalithaa remains hugely popular despite being jailed more than once for corruption.

The reclusive leader has run her party with an iron hand with no clear line of succession to govern a state that is home to major auto and IT outsourcing firms.

About 2,000 policemen were deployed around the hospital in case emotional crowds of devoted supporters reacted strongly to further developments. Supporters have been known to commit suicide in reaction to bad news.

"Nothing can kill Amma," said one man holding a picture of the leader outside the hospital.

C. R. Saraswathi, a spokesman of her AIADMK party, said the chief minister was doing well, even though the hospital said she was on life support.

Her ministers have on occasions been seen to prostrate themselves at her feet.

O.P. Panneerselvam, a cabinet colleague, has stood in for Jayalalithaa in the past, but he has repeatedly made it clear he is not replacing her and pointedly refused to sit in her chair at cabinet meetings.

The AIADMK and its bitter rival, the DMK, are the main parties in Tamil Nadu, and both are built around a personality cult of their leaders who are drawn from the Tamil film industry.

India's two national parties, the ruling Bharatiya Janata Party and the opposition Congress have little political presence in the state, despite decades of efforts.

The death of Ramachandran, or MGR as Jayalalithaa's mentor was known, sparked looting and rioting across Tamil Nadu by his grief-stricken supporters in 1987.

The U.S. consulate in Chennai asked U.S. citizens to avoid areas of demonstrations and be vigilant because of the chance of violence.

"U.S. citizens are reminded that even gatherings intended to be peaceful can turn confrontational and escalate into violence," the consulate said in a notice posted on its website

One of India's most popular politicians, Jayalalithaa Jayaraman, died on Monday following a massive cardiac arrest, setting off an outpouring... Read More...