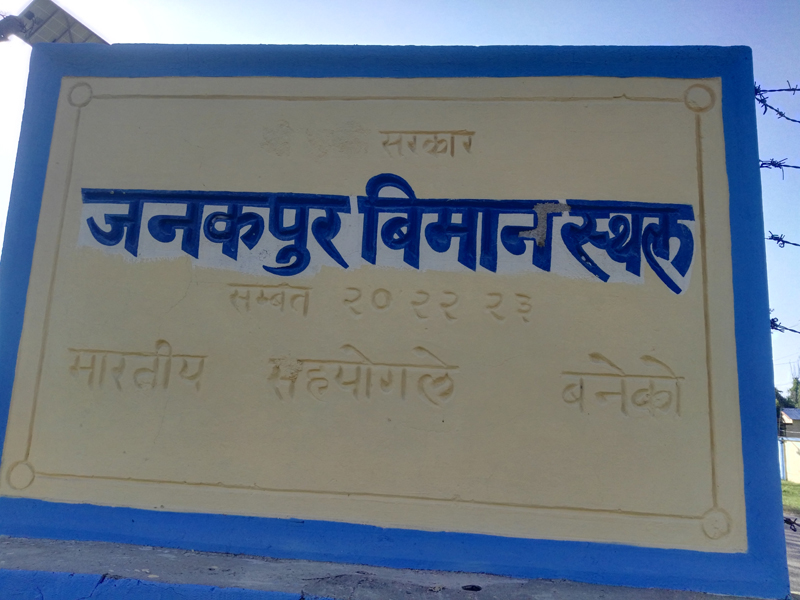 Long accustomed to walking with bowed heads, Madheshis have begun to imitate Bihari swagger
JANAKPUR: Urban infrastructure is either awfully inadequate or non-existent in this newly declared sub-metropolitan city. Relationship between the state and society is strained almost to the point of rupture. Economy is in shambles with absolutely no employment opportunity outside of petty trade and basic services. Some pilgrims do come, but hardly any of them stay longer than a day. Even though the transport connectivity with rest of the country is fairly dependable, the Mithila region doesn’t rank high on the destination list of domestic tourists. Outside of NGO-executives and human rights supervisors, hardly any international visitors show up as well.

With Dhanusha-Mahottari being two of the top exporter of manpower from the country for several years in a row, the countryside wears a desolate look. But despite all the gloom and doom in Tarai-Madhesh, a sense of optimism seems to persist in the region. The general mood in Mithila is in stark contrast to Kathmandu where pessimism hangs thick like smog among townies.

There could be several reasons behind an upsurge of hope and expectation. Unpredictable consequences of exodus of youths towards 3D (Dirty, Difficult and Dangerous, not necessarily in that order) jobs in West Asia and Malaysia notwithstanding, remittances have substantially reduced absolute poverty. Wage rates have gone up, which means that even day-labour can now afford to buy school uniforms for their children. Consumption of alcohol has raised spirits. Chewing tobacco has gone upmarket. Hope comes from the possibility of remittance continuing for an indefinite period.

Expectations are a little more difficult to justify. Federalism has promised to create a moth-eaten Madhesh completely disconnected with east and west. People keep questioning whether there is any justification for keeping plains between Mechi and Koshi in Madhesh. In fact, no explanation is necessary for what is natural: The settlers have every right to stay where they are and enjoy everything they have, but it’s a Madheshi land and restoration of its rightful identity is crucial for the psychological healing of the entire externalized community. Generosity, however, isn’t a PEON characteristic. It seems that the wound will continue to fester.

Developmental dreams are even more of a chimera. Growth without dignity is meaningless. For one thing, centuries of investment lag—surplus of the region were carted away by Ranas, Shahs and their PEON cronies with little concern for local requirements—requires huge sums that the government in Kathmandu will be either unable or unwilling to spare. Secondly, absorptive capacity of the locality in terms of human resource, technology and capital is so low that any major project will bring in flood of internal immigrants further aggravating inter-community relations.

A little hope perhaps comes from the expectation of renewal of cross-border ties that had almost broken since the 1990s as Bihar turned into badlands and Madhesh experienced a brief interlude of boundless optimism. In almost quarter of a century, things have changed considerably. There is energy and enthusiasm in Bihar. In comparison, Madhesh appears as forlorn as it used to be before 1990s when Madheshis often ran away from the fear of their own government machinery.

Looking out
The shortage of Indian paper money has hit Madheshi consumers almost as much as common Biharis. Since there is almost no faith in the capacity of local healthcare facilities, anyone that can afford likes to head for Sitamarhi or Laheriyasarai for treatment.

Residents of not only Birgunj but even Hetauda prefer the Duncan Hospital in much-maligned Raxaul over several teaching hospitals closer to home.

This is marriage season and cash is needed to fulfill social obligations with relatives on both sides of the border. Thrifty consumers prefer to procure daily necessities from Bihari towns. The supply of Indian currency in the local market was never adequate. It has now reached crisis levels. The Nepal Rastra Bank converts two thousand rupees for first two hundred customers in the queue outside its premise every day. If somebody requires even a paisa more, documentary substantiation is necessary.

In theory, it all looks normal. Trying telling that to a vegetable vender with a basket on her head. She can’t read and fill up the required form. She doesn’t have the citizenship paper and even if she has, she doesn’t know where and how to get it photocopied. The officer who deals with such cases, quite naturally a Khaas (Khas-Arya) person, is an occasional writer with a freelance journalist’s press pass and is full of sympathy for the Aam (Adivasi and Madheshis) people he has been deputed to serve. But he is merely a cog in the wheel of the system. Beyond a point, he breaks and barks: “Why do ‘they’ need to go to India for everything!” He seems blissfully unaware that it has been a way of life for centuries and can’t be wished away.

Across the border in bazaars of Bihar, shopkeepers do accept Nepali rupee, but the conversion rate of the open market is controlled by currency traders in Kathmandu.

Whether such transactions have the complicity of government officials and central bank employees is a matter of speculation, but Nepal definitely doesn’t have much to export to pay for everything it imports. The lopsided transaction can be assessed in a minute at customs entry points: All trucks coming towards Nepal are loaded; almost each one of them heading the other way is empty.

At Bhittamod crossing, Nepal is erecting yet another monstrosity: A huge gate! The ornate Shankaracharya Gate at Birgunj-Raxaul border has become an obstruction for the traffic. Border checkpoints could do with better lay-bys, cleaner toilets and other amenities for truckers and passengers. However, the first thing on the priority list of Nepali authorities is invariably a gateway. The only saving grace of Bhittamod crossing is that facilities on the other side are even more chaotic with habitually ill-behaved SSB manning the post. The economic vitality of the bustling bazaar, however, is immediately noticeable where bullock carts, rickshaws and small trucks are either being loaded or unloaded with everything from fresh cauliflowers and green beans to construction materials.

Homing in
Economists believe that the decay of Bihar began with the Permanent Settlement of East India Company that created parasitic revenue contractors styled as Zamindars.

Investment for increase in productivity dried up as an insecure leisure class siphoned off its savings. After the Sepoy Mutiny of 1857, this region was further exploited as lackeys of imperial overlords competed with each other to please their masters.

Blighting of Bihar continued even after independence as the government in New Delhi focused its attention on national integration by luring belligerent states with promise of bigger investments. Bihar being secure was left to languish. In fact, were it not for Indo-China war, the state may have failed to get any central investment for its most basic road network.

Perhaps the freight equalization scheme that made coal and iron ore cheap for coastal India had the most pauperizing effect upon the state. It slowly made the region dependent on what has been called a ‘money order’ economy. After the JP movement of 1970s, Bihar became for the Nehru-Gandhi family what Mithila had become for the Shahs after throwing of a bomb at King Mahendra’s car—a region to be punished with denial of all governmental assistance.

The regime of Lalu Yadav may have feasted on fodder, but the credit of reigniting Bihari pride goes to the rustic politico. All that Nitish Kumar had to do was restore order.

Change of guards in New Delhi helped. Prosperity is still a long way, but there are more flyovers in Patna now and pigs are fatter everywhere. Some of the energy of borderlands overflows into Madhesh.

Indo-Nepal ties are establishment affairs of New Delhi and Kathmandu. After 1970s, the biggest Indian aid to Janakpur has been for the construction of a Dharmsala. These days when they repaint signboards, authorities let the Indian assistance part fade. For the border regions, however, people to people relationships matter more.

Cross-border links had been left to languish for decades. A prosperous and confident Bihar will have positive impact on confidence levels of their cousins in Madhesh. Long accustomed to walking with bowed heads, Madheshis have suddenly begun to imitate Bihari swagger. With awareness, humility too will come. For now, looking southwards is uplifting for it shows that regeneration is possible.

BUTWAL, Dec 5: Life in western and mid-western regions of the country has remained tense for the past five days as... Read More...

Sometimes when you feel stuck, it could be because you’re tired of pursuing the same things in life. You could... Read More...

On lockdown
23 hours ago

INFOGRAPHICS: Nepalis affected by COVID-19 throughout the world
11 hours ago

COVID-19 tests being conducted from 10 different places: MoHP
14 hours ago