The meeting, which was held at Dahal's residence in Khumaltar, dwelt on priorities set by the new Biden administration in the United States.

"In my series of meetings to discuss the new US presidential administration's priorities, I met with @cmprachanda," Ambassador Berry tweeted after the meeting. 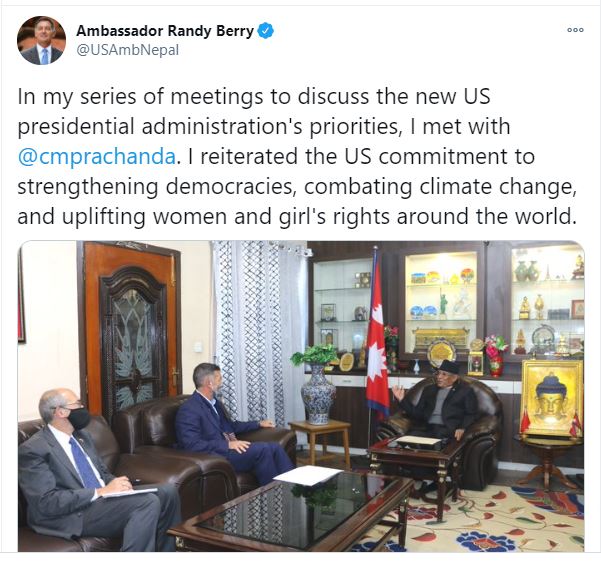 During the meeting, Berry also reiterated the US commitment to strengthening democracies, combating climate change, and uplifting women and girl's rights around the world.

Earlier on January 22, Ambassador Berry had called on Prime Minister KP Sharma Oli to share priorities set by the new Biden administration. During the meeting with the prime minister, Ambassador Berry noted that the Biden administration wants to partner with Nepal and other countries to meet the common challenges that no single nation can face on its own--from climate change to nuclear proliferation, and from cyberwarfare to global health challenges like COVID-19, according to a press release issued by the US Embassy in Kathmandu.

“America has been tested and we have come out stronger for it. We will repair our alliances and engage with the world once again. Not to meet yesterday’s challenges, but today’s and tomorrow’s.  We will lead not merely by the example of our power but by the power of our example.  We will be a strong and trusted partner for peace, progress, and security," the ambassador quoted the US president as saying.

Ambassador Berry told Prime Minister Oli the new administration will use diplomacy as the premier tool for global engagement, according to the embassy.

"US President Biden believes in international cooperation to solve common challenges like COVID-19.  To that end, President Biden will resume U.S. membership in the World Health Organization.  He will also restore the U.S. relationship with other international organizations and reinvigorate partnerships with democracies around the world, including Nepal," Berry told Oli.

As a first order of business, President Biden rejoined the Paris Climate Accord and will lead a diplomatic push to raise countries’ climate targets, including the United States, Berry said. During the meeting, Ambassador Berry recognized that Nepal is on the front line of climate change.  On the occasion, the ambassador also expressed the embassy’s desire to help make the Sagarmatha Sambaad dialogue a success and discussed how to address the effects of climate change together.

"The Biden administration will be a leader on human rights, including by having a focus on uplifting the rights of women and girls at home and around the world.  The US looks forward to working together on these issues," Berry told the prime minister.

The ambassador's meeting with Dahal was one in a succession of high-level meetings Ambassador Berry will have with Nepali government and political party leaders to discuss the new presidential administration’s global priorities, according to the embassy.