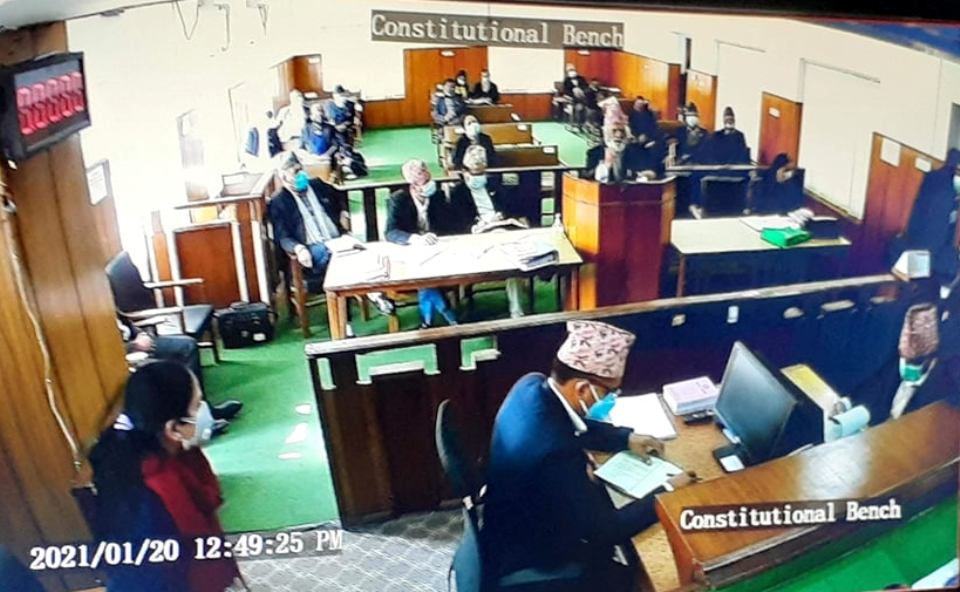 KATHMANDU, Jan 20: Stating that the dissolution of parliament was unconstitutional, Senior Advocate Chandra Kanta Gyawali has said that Prime Minister KP Sharma Oli attacked parliament after he failed to settle the intra-party rift within the ruling Nepal Communist Party.

Participating at the ongoing hearing on the case against the dissolution of parliament at the Supreme Court on Wednesday, Gyawali said that parliament should not become the victim of the intra-party conflict.

"There is no conflict between the prime minister and parliament. In fact, parliament was dissolved due to the intra-party conflict in the NCP," he said.

Gyawali said that the House of Representatives should be reinstated through the Supreme Court verdict as demanded by the petitioners.

He said that the constitution has not given any political or constitutional right to Prime Minister Oli to dissolve parliament. "The current government has already turned to caretaker one," he argued.

Taking part in the same hearing, Senior Advocate Krishna Prasad Bhandari also said that Prime Minister Oli dissolved the parliament after his party witnessed a rift. "Oli dissolved parliament just to show his party leaders that he was all-powerful. The House of Representatives which was elected by the people for five years did not have its own fault for its early demise and there was no logical reasoning for dissolving it," Bhandari said.

Senior Advocate Bhandari, who is one of the petitioners against the dissolution of parliament, also accused Prime Minister Oli of imposing totalitarianism in the country by dissolving parliament. "The decision to dissolve the parliament took place at the same time when there was a ballooning intra-party rift within the NCP and Chairman Oli was in trouble. This is totally unconstitutional," he argued.

Hearings have been held at the apex court’s five-member Constitutional Bench led by CJ Rana on 13 writ petitions filed against the dissolution of the 275-member House of Representatives by President Bidya Devi Bhandari at the recommendation of Prime Minister KP Sharma Oli.

The Supreme Court on Jan 15 ordered that the hearing on the writ petitions filed against the dissolution of the House of Representative (HoR) would be conducted by the constitutional bench itself  despite the call of the petitioners to take the case to the full bench.

KATHMANDU, Jan 17: Advocate Santosh Bhandari has said that the Prime Minister does not have the right to dissolve the... Read More...

KATHMANDU, Jan 13: A hearing on 13 writ petitions filed against the dissolution of the House of Representatives (HoR) at... Read More...