With a nation in crisis, pressure builds on Biden to deliver 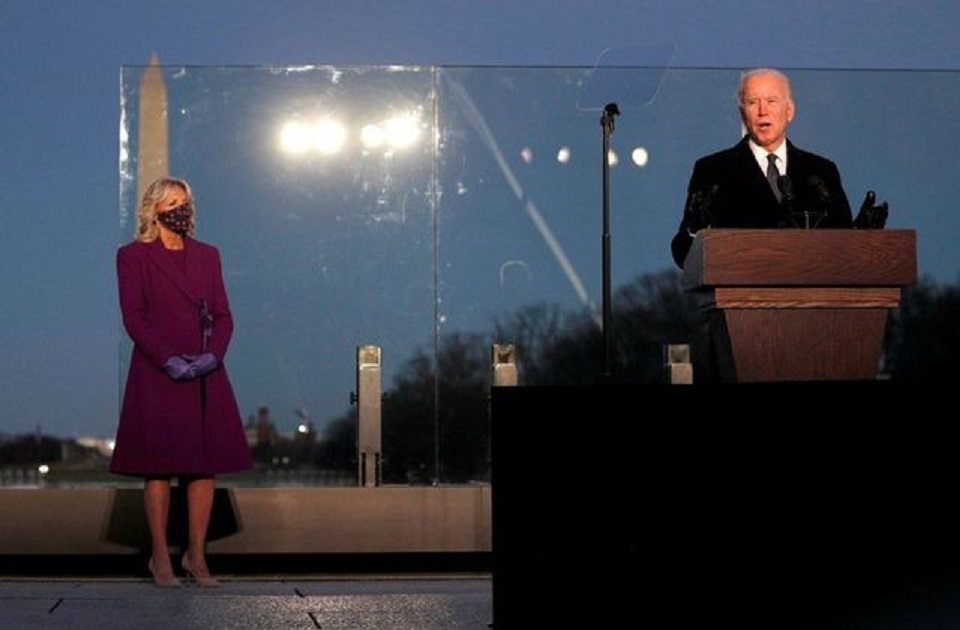 WASHINGTON, Jan 20: During his presidential campaign, Joe Biden vowed to fight for the soul of America. As he formally assumes office as the next U.S. president on Wednesday, Biden now faces the steep task of repairing a nation’s soul in battered and desperate shape.

Few presidents, if any, have taken power in circumstances such as these: a still-raging pandemic claiming lives and shredding livelihoods, a continuing threat of armed insurrection and a defiant former president who faces a U.S. Senate trial charged with encouraging an attack on his country’s capital.

A Democrat, Biden will preside over a deeply polarized electorate, with millions of voters still believing defeated Republican President Donald Trump’s false claims of election fraud, and a divided Congress, where gridlock looms as the default and success will come only by compromise.

With that, Biden is under significant pressure to turn his pledges of unity and competence into results - and swiftly.

“He has to stay focused on vaccine distribution and solving the ‘last mile’ problem,” said Joe Trippi, a veteran Democratic strategist. “Failure is not an option. Losing that focus is not an option.”

Biden wants Congress to move quickly. His team believes the most effective way to lower the political temperature is through results, not rhetoric – specifically, passage of the $1.9 trillion virus relief package that Biden has proposed as a first step in stabilizing the economy, opening schools and ramping up vaccinations nationwide.

The public wants to see a functional government deliver, a Biden adviser said, adding that plenty of Trump voters have been hurt by the pandemic.

“There is a path out of this darkness,” another Biden adviser said, “but we will need support from Congress.”

Unlike other newly elected presidents, Biden will have no crowds to rally him. Instead, he will be sworn in with historic Washington resembling an armed camp, the streets deserted due to the twin dangers of civil unrest and COVID-19.

Douglas Brinkley, a presidential historian at Rice University, likened Biden’s inauguration to Abraham Lincoln’s in 1861, when the United States was on the brink of the Civil War and the new president faced assassination threats.

“The smell of violence was in the air,” Brinkley said.

The nation is not on that kind of precipice, Brinkley added. But the Capitol siege will cloud the early days of Biden’s presidency. After being impeached by the U.S. House of Representatives on a charge of inciting the Jan. 6 assault on the Capitol, Trump faces a Senate trial that threatens to derail Biden’s agenda from the very start and delay confirmation votes for his executive branch nominees.

Biden will enter the White House with more of a tailwind than Trump enjoyed. He has the approval of a little more than half the country – 53%, according to Reuters/Ipsos polling, while Trump came into office four years ago at 46%.

The good news for Biden is that a majority of the public would like him to have a productive relationship with Congress, said Mo Elleithee, executive director of the Georgetown University Institute for Politics and Public Service, which conducted its own poll on civility in government.

Biden’s willingness to work with Congress “is a departure from where we have been the last four years, and I think it would go a long way toward helping people catch their breath,” Elleithee said.

Trump, a neophyte as a politician, stood at odds with the legislative process, often refusing to lay out his own priorities in negotiations. He struggled to harness the power of government to achieve his policy goals.

Yet Biden will have to contend with narrow Democratic majorities in the House and Senate, which will leave him little maneuvering room.

In the House, Speaker Nancy Pelosi will be pressured by progressives in her caucus to keep the relief package as far-ranging as possible. But any comprehensive measure passing the Senate likely will require the support of Republicans, several of whom have already expressed skepticism over the virus bill’s price tag.

The relationship between Biden and the Senate Republican leader, Mitch McConnell, will be tested early. McConnell has an incentive to work with Biden on virus relief, said Doug Heye, a former official at the Republican National Committee.

“Entire industries are shutting down: tourism, airlines, restaurants,” Heye said. “This touches every community in the country.”

Biden’s team may have complicated matters by including liberal priorities such as a federal $15 an hour minimum wage in the package, which may alienate Republicans in a country where the minimum wage is $7.25.

During Obama’s presidency, Biden watched as McConnell and other Republicans parlayed opposition to his agenda into a winning electoral strategy, first taking back control of the House in the 2010 midterm election and later the Senate, frustrating much of Obama’s ambitions.

With his thin Democratic majorities in Congress, Biden will be forced to tread carefully and not hand Republicans too large a target to exploit. That may mean putting off big-ticket legislative items such as Biden’s sweeping $2 trillion climate plan. Initially, Biden will look to do what he can on climate and other priorities through executive actions, aides said.

Biden can be thankful for one thing: Trump will not have his Twitter account to make mischief from Day One. While no one expects the former president to cease being a political force, his capacity to make life difficult for his successor will be greatly diminished with his account permanently suspended.

Brinkley, the historian, said with the American public on edge from the Capitol attack and after Trump spent weeks trying to throw the election’s outcome in doubt, Biden will have accomplished much simply by being sworn into office.

“It has been a long political year, and there is fatigue out there,” Brinkley said. “The relief of having a new president will alleviate a lot of anxiety.”