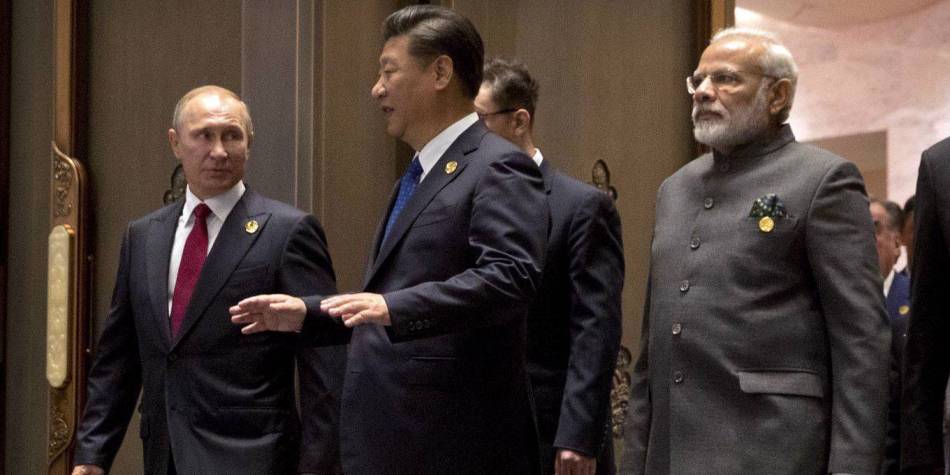 LONDON – This November will mark the 20th anniversary of the BRIC acronym that I coined to capture the economic potential of Brazil, Russia, India, and China. Many commentators will be revisiting the concept and assessing each country’s performance since 2001, so here are my own thoughts on the matter.

First, and contrary to repeated suggestion, the main point of my original November 2001 paper, “The World Needs Better Economic BRICs,” was neither to forecast endless growth for these economies, nor to promote some new marketing concept for investment funds. As anyone who read that paper will know, the central argument was that these economies’ probable growth in relative GDP would have important implications for global-governance arrangements.

With 2001 having been the third year since the introduction of the euro, I argued that large European countries—namely, France, Germany, and Italy—should be represented collectively, rather than individually, at the G7, the International Monetary Fund, and other organizations, thereby making room for the world’s rising economic powers. I then outlined four different scenarios of what the global economy might look like in 2010, three of which conjectured that the four BRICs’ share of global GDP would grow.

In the event, the 2000-10 decade turned out to be both absolutely and relatively better for each BRIC than I had foreseen in any of my scenarios. But until the 2008 financial crisis, there was virtually no notable change of global-governance structures. And while that upheaval did result in the creation of the G20 summits and some reforms within the IMF and the World Bank, it is troubling that an economic disaster was needed to effect even limited change.

Within a year of the G20 summits’ formation, the BRICS had added South Africa and formed their own geopolitical club. Yet while this development reinforced the original economic concept, it didn’t seem to accomplish much beyond that. Worse, there has been very little progress on the global-governance front since then, even in the face of a deadly pandemic.

Returning to the BRIC economic story, between 2003 and 2011, my colleagues and I came up with various projections for how each economy would do between then and 2050. This work, too, led to a few misperceptions, one being that we were offering a concrete forecast. In fact, the title of our 2003 paper, “Dreaming with BRICs: The Path to 2050,” made clear that we were imagining one possible, aspirational path, and we certainly didn’t predict persistently strong growth rates across the board. For the 2021-30 decade, we assumed a real (inflation-adjusted) GDP growth rate of less than five percent per year for China, and suggested that only India would still be experiencing accelerating growth after 2020 (owing to its strong demographics).

We do not yet know the 2020 GDP numbers for major economies, but most countries’ real and nominal 2020 GDP will certainly be smaller than in 2019, and probably significantly so in the case of Brazil, India, and Russia. The exception will be China, whose GDP will probably have increased by five percent or more in nominal (US dollar-denominated) terms, further increasing its share of global GDP.

The pandemic comes on the tail of a decade (2011-20) that was nowhere near as fruitful as the first one. Brazil and Russia’s respective shares of global GDP are probably roughly back to their level in 2001. And while India has emerged as the world’s fifth-largest economy, it has suffered several rocky years. China alone enjoyed remarkable success during this period. With a nominal GDP of more than $15 trillion, its economy is around 15 times bigger than it was in 2001, triple the size of Germany and Japan, and five times the size of the United Kingdom and India. Already around three-quarters the size of the United States, its economy is on track to become the largest this decade in nominal terms, having already achieved this threshold in purchasing power parity terms.

Despite a disappointing decade for Brazil and Russia, it is still possible that the BRIC grouping could become as large as the G7 within the next generation. If international trade, investment, and financial flows between the BRIC countries and the rest of the world continue, this level of growth would be good for everyone.

But that is a big if. Much will depend on whether we can muster the political leadership to strengthen international governance and the openness to which Western democracies have long aspired. In terms of these political questions, the BRICs’ second decade has been tough. Relations between the West (the US and Europe) and China and Russia are as fraught as they have been in decades, though the recent conclusion of an EU-China investment agreement offers some good news.

One hopes that the arrival of US President-elect Joe Biden’s administration and Britain’s chairing of the G7 will make up for lost time. There appears to be some momentum behind the idea of creating a larger Democratic Ten (D10) alliance comprising the G7 members and Australia, India, and South Korea. From a Western perspective, this grouping would have obvious geopolitical and diplomatic advantages, and might help with the governance of cyberspace and technology; but it is unclear what purpose it would serve for the wider world.

Indeed, a D10 could raise more questions than it answers. Why not include other democracies that are already in the G20, such as Brazil, Indonesia, and Mexico? Why would South Korea want to be in a group that excludes China, its huge economic neighbor, but includes Japan, with which it is often in diplomatic spats? How relevant could the D10 possibly be in efforts to address climate change, global economic stability and equality, and issues such as the distribution of COVID-19 vaccines and antimicrobial resistance?

While mass vaccination points to an end to the COVID-19 pandemic in the next year or so, it does not... Read More...

As the trade war continues

Why was the University Bill introduced, leaving aside the Education Bill?
19 hours ago
Ruling coalition in Jeopardy
10 minutes ago