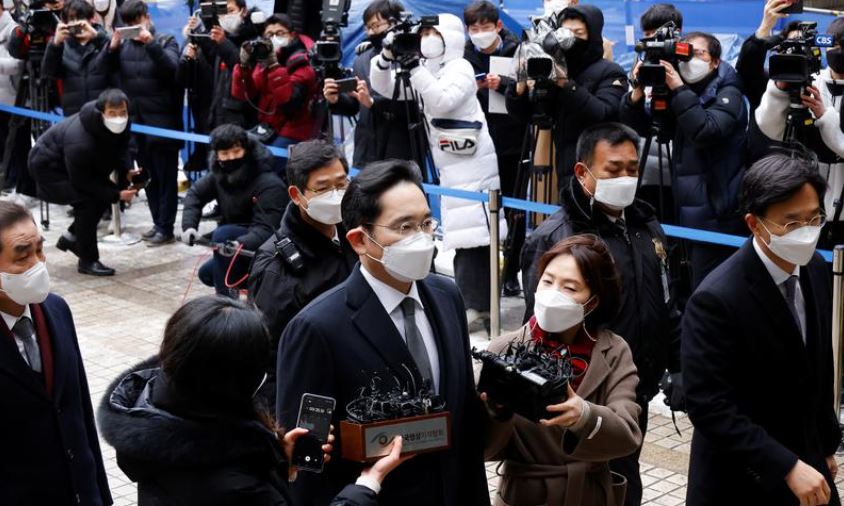 Lee was convicted of bribing an associate of former President Park Geun-hye and jailed for five years in 2017. He was freed on appeal after serving one year, but the Supreme Court ordered a retrial by the High Court.

The following is a timeline of events in the case against Lee.

Dec 21: A team led by a special prosecutor launches a formal criminal investigation.

Feb 17: Lee is arrested over his alleged role in the scandal and paying bribes to organisations controlled by Choi to secure support for a merger of two Samsung affiliates that was designed to cement his control of the Samsung Group.

Feb 28: Samsung Group dismantles its corporate strategy office amid accusations that Lee worked with the office to bribe former president Park and her confidante Choi.

Mar 31: Park is arrested on charges including bribery and abuse of presidential power.

Feb 5: Lee is released from jail after an appeals court cut his sentence to two and a half years and suspended the sentence for four years. Lee’s attorney says he will appeal to the Supreme Court to try to overturn the conviction.

Aug 29: South Korea’s Supreme Court sends Lee’s case back to the appellate Seoul High Court for review, saying its interpretation of what constituted bribes was too narrow.

Oct 25: The first hearing in Lee’s bribery retrial is held.

May 6: Lee makes a public apology over controversies in Samsung’s succession plans and says he will not hand over management rights to his children.

Jan 18: The Seoul High Court sentences Lee to two and a half years in prison.

Samsung is in discussions about “potential safety issues” concerning some of its washing machines after a class-action lawsuit complained the... Read More...