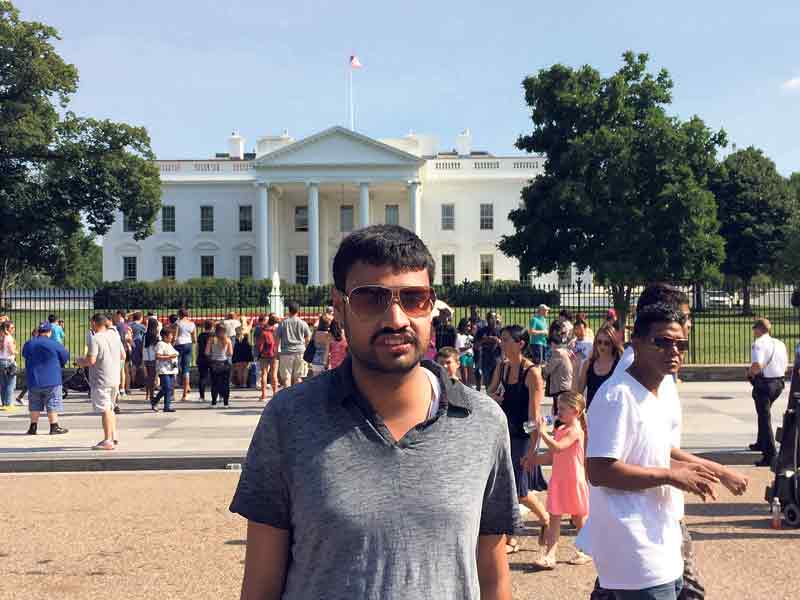 KATHMANDU, Dec 2: Sushil Adhikari, 27, cannot see through his eyes. The visually impaired however has no regrets. He feels that even though he is deprived of physical eyes, he has been blessed with keen inner eyes.

“My story is strange. I am blind if you consider eye sight, but through inner eyes I’ve experienced the whole world and people. I feel like the entire world is my home,” he said smiling gently.

One would definitely envy him after hearing Adhikari’s travelogue. A resident of Arubari, Jorpati he has spent four years traveling around India, Bangladesh, Mongolia, Germany, France, Spain and America. “I have been to the USA thrice,” he reported.

Riding camel in the desert of Mongolia, drenching himself in a highly sophisticated restroom, feeling water current at the famous Niagara falls, losing self in the beauty of seas, relishing fish dishes in Bangladesh and being for a moment in the ‘warm arms’ of a Spanish woman, among other memories, continue to thrill him. “She hugged me tight, and I felt being at the top of the world!” exclaims Adkhiari.

The world tour has indeed filled the blind man with awesome sense of gratitude and love, which, he believes, is the essence of life.

Adhikari was not born without eyesight. He lost it to some illness at the age of 10. And that had happened one fine day when he was strolling through the streets of locality. While talking to friends they started to vanish from his eyesight. Suddenly everything was black. And that blackness never disappeared.

“That was a devastating moment for me. Turning blind suddenly is not something you would ever imagine to happen with you. But that happened with me,” he reminisced. “But I did not give up. Life had to be lived, battle has to be fought,” added the brave man.

His first tour outside Nepali was to Darjeeling of India in 2012. In Kalimpong, he felt to be in a small Nepal, he says. After a year, he was in Delhi for some time where he had to go through several bitter experiences. “In train, blind people like me would face extreme hassles. The hassles were the same in other public places.”

Adhikari then flew to Bangladesh where he noted that the society was not much liberal like in Nepal or India. “I felt women are more suppressed there, you can’t talk to them freely,” he narrated.

To take part in a program, he reached USA in 2014. During this journey he went to the city of Boston, where he remembers residents cared for people like him.  “Disabled people like us are given better service in developed places, or it could be that only kind people came across my way. I got great support even at the immigration,” he said.

His journeys are however not funded or facilitated in any way by the government. He is a self guided man since childhood and had dreams hidden in his heart. Despite being visually impaired, he was techno savvy and that turned out to be a boon for him. “Thanks to the development of technology, there are enough ways to claim digital space for people like us. My engagements on internet, my friend circle and contacts helped me grab opportunities for all the travels I made,” he said revealing the secret of his happy life.

“This year, I visited the South Korea’s capital Seoul. I have heard that once we used to send rice to that nation. But now you see where we stand and where they are!” he wondered.

A post graduate, he has taken part in dozens of seminars for disabled people outside the country. In these avenues he has shared the stories of the blinds in Nepal which he said has often shocked audiences from the developed world.

“They would hear our stories with shock, and I would hear their experiences in equal awe,” Adhikari said.

On Saturday, the world is celebrating ‘World Disabled Day’. On the occasion, Adhikari urged for support from all quarters for people with disabilities so that everyone can live in this world with equal dignity and opportunity. “Let’s make the world of humans more beautiful by guaranteeing everyone’s right to life and dignity.”