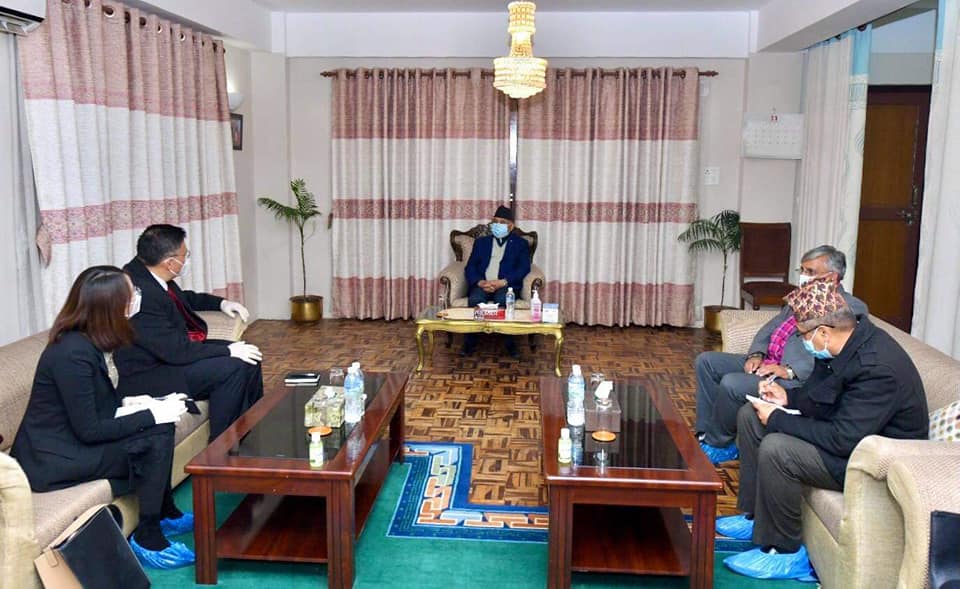 KATHMANDU, Dec 29: At a time when a section of Indian media is accusing China of interfering in Nepal's internal political affairs, Chinese experts have argued that China has a legitimate reason to be concerned with the internal situation in Nepal and to provide assistance to its partners through inter-party cooperation and exchange, which is not "interfering in its internal affairs" at all.

Lin Minwang, a professor with the Institute of International Studies at Fudan University, has been quoted by China's state-run Global Times newspaper as saying that China has huge investment and deep cooperation with Nepal under the frame of the China-proposed Belt and Road Initiative, and as a neighbor, China has a legitimate reason to be concerned with the internal situation in Nepal and to provide assistance to its partners through inter-party cooperation and exchange.

Another scholar Hu Zhiyong, who is a research fellow at the Institute of International Relations at the Shanghai Academy of Social Sciences, has been quoted by the Global Times as saying that the inter-party exchanges between the CPC and the CPN or other Nepali political parties are not India's business, and even if the CPC is providing assistance to mediate the CPN's intra-party conflicts, or sharing experiences on solving such problems, it was entirely reasonable and legitimate.

"In fact, whether in the past or at present, India has always been the biggest and most powerful external force interfering in Nepal's internal affairs," Lin has been quoted as saying.

Hu noted, "I have learned from Nepali scholars that India has sent intelligence agents to conduct surveillance missions on CPN politicians' exchanges with Chinese diplomats and visiting officials in Kathmandu [the capital of the country]. So who is interfering? The answer is clear."

Chinese experts have opined that the inter-party exchanges are not India's business, with India actually acting as the biggest external power interfering in Nepal's internal affairs.

China's Ministry of Foreign Affairs on Monday said that the ongoing visit by a high-level Chinese Communist Party (CCP) delegation is a part of friendly exchanges between Nepali and Chinese political parties and that China has no policy of intervening in the internal affairs of Nepal.

The remark from the Chinese government comes at a time when a section of Nepali and India media have raised questions over the ongoing meetings of Chinese leaders with the leaders of the ruling Nepal Communist Party (NCP), calling it China's interference in Nepal's internal affairs amid deepening political crisis triggered by the dissolution of the House of Representatives and a vertical split in the NCP.

The four-member delegation led by vice minister of the International Department of the Communist Party of China, Guo Yezhou, is currently on a visit to Nepal. The delegation met President Bidya Devi Bhandari and Prime Minister KP Sharma Oli on Sunday. The delegation also held separate meetings with rival faction leaders of the ruling NCP on Monday.