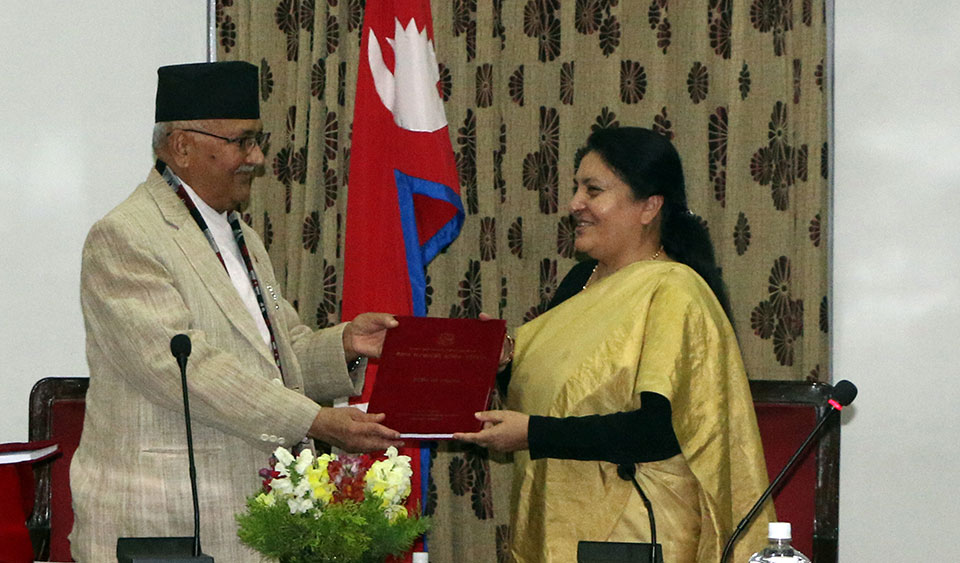 Prime Minister K P Sharma Oli has committed a historic blunder by recommending the dissolution of the House of Representatives and declaration of mid-term elections to the office of the president.  PM’s move is unconstitutional, objectionable and against the political values from every possible angle. Yes, the constitution gives the PM the right to dissolve the parliament but only in a case where a majority government cannot be formed.

There are other compelling political and practical reasons why the PM should not be forgiven for taking this move. First, with the bitter experience of perennial government instability post-1990 and up until 2015, the constitution made some concrete provisions to ensure stability. The constitution therefore enshrined provisions regarding prohibition of no-confidence-vote till two years after a prime minister takes office and required that the name of the candidate to take his/her place should be made public while making efforts to unseat a prime minister. Such a provision was enshrined in the constitution with the objective of helping the government serve its full term, implement its development and policy visions and to discourage horse trading which had become a blot of parliamentary system in the 90s.  Second, the PM's decision is against the people’s mandate. People voted the Nepal Communist Party to power because the NCP leaders had promised stability.  With a stroke of a pen, PM Oli and President Bidhya Devi Bhandari made a mockery of these constitutional provisions and they have, together, betrayed the country and the people. This day will go down in Nepal’s history as the black day and PM Oli and President, we are afraid, will remain stigmatized for committing this utterly regressive move.

PM’s decision and its endorsement by the President have enraged people, political cadres and leaders across the political spectrum.  Until Sunday afternoon, there was a faint hope that President Bhandari would reconsider the flawed decision of the PM. If the President had sent back the proposal for reconsideration, she would do justice to the dignity of the office she is occupying. It is unfortunate that the president too has acted complicit to the move that in no way is going to help the cause of stability and uphold the current political system.

PM Oli’s decision comes at a time when the infighting inside the NCP is reaching a boiling point and the anti-republic protests are gaining momentum across the country. This decision is going to embolden the pro-monarchy forces in the days to come and leave enough space for political maneuvering by various elements—domestic and foreign. The last hope lies in the Supreme Court—we hope a case will be filed against this move at the Supreme Court and we sincerely hope that the court will give a wise verdict.

It is unfortunate that PM Oli has shown no care about the precedent this blunder will leave in Nepali politics.  PM Oli should be and will be held accountable for the chaos that will follow and for leading the country to an abyss of uncertainty.

“He might be preparing to impose a state of emergency in the name of the COVID-19 crisis and curtail political... Read More...

The ‘unconstitutional’ move by PM Oli begins the era of uncertainty in Nepali politics. Let us all be careful. ... Read More...

Construction of Dharahara expected to be completed by mid-March

The relics of old Dharahara, brought down by the 2015 Earthquake, will be preserved as a living quake museum beside... Read More...