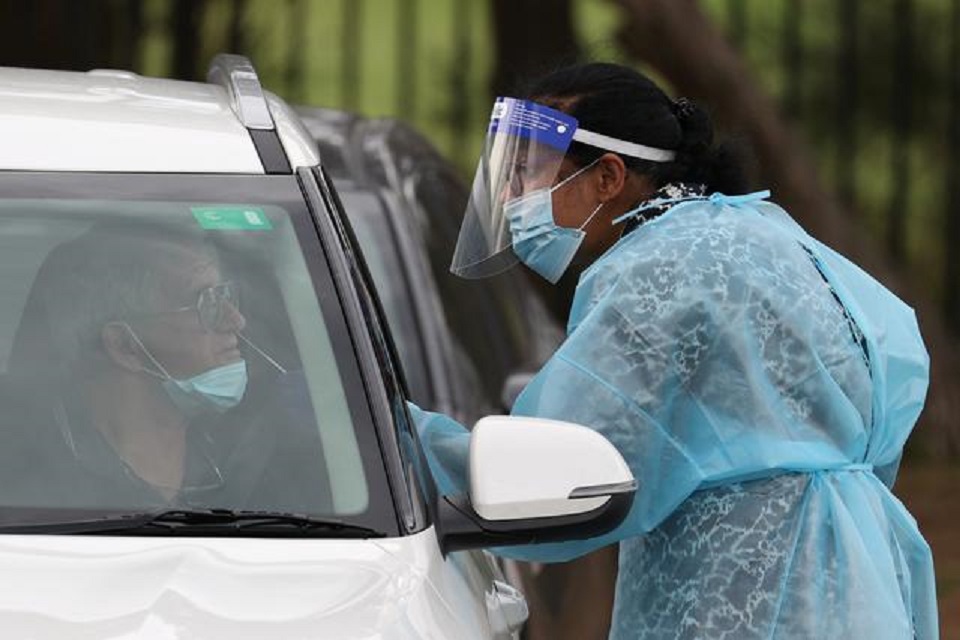 A person is swabbed by a medical professional at a drive-through coronavirus disease (COVID-19) testing clinic in the Warriewood suburb of Sydney, Australia, December 18, 2020. REUTERS/Loren Elliott

SYDNEY, Dec 19: Around a quarter of a million people in Sydney’s northern beach suburbs were ordered on Saturday into a strict lockdown until midnight on Wednesday in an effort to contain a coronavirus cluster which authorities fear may spread across the city.

Authorities will on Sunday announce whether further restrictions will be imposed on the rest of Sydney, Australia’s most populous city.

“I want to make that clear, to say to greater Sydney, please, please, do not go out tonight or the next few days unless you really have to,” New South Wales state Premier Gladys Berejiklian said at a news conference on Saturday.

The outbreak on Sydney’s northern beaches now totals 39 with two additional cases still under investigation. This up from five only two days ago, but authorities do not know the origin of the virus, which genome testing suggests is a U.S. strain.

Australia has avoided the worst of the coronavirus due to international border closures, lockdowns, widespread testing and social distancing. It has recorded so far a total of around 28,100 infections.

Until this week, Australia had gone more than two weeks without any local transmission and had lifted the majority of restrictions ahead of Christmas. The Sydney outbreak prompted states and territories to reimpose border restrictions, sending holiday travel plans for thousands into chaos.

The Sydney lockdown will mean people in the designated area will only be allowed to leave home for one of four essential reasons: grocery shopping, work, compassionate grounds including emergency medical treatment, or visiting an isolated relative.

Authorities have pinpointed two clubs at Avalon beach as the original transmission sites for the cluster, but have issued more than 30 potential secondary transmission sites, as far away as Bondi and Cronulla beaches in the east and south of the city.

After more than 12,000 tests were conducted on Friday, people queued in Sydney for hours on Saturday to get tested.

“That is the community responding in the way we want them to respond,” Australia’s Deputy Chief Medical Paul Kelly said.

Major public facilities in the “hotspot” area, such as swimming pools, beaches and playgrounds, have been closed and visitors banned from age care facilities.

Many restaurants, cafes and 14 hotels in the area have voluntarily closed this weekend.