Synonym of a woman is “helpless,” says a government textbook, and Facebook users are outraged

KATHMANDU, Dec 7: Ramro Nepali Vyakaran, written by Begendra Subba and Ramchandra Khanal, a government-prescribed textbook for lower secondary level defines a woman as a “helpless person”. The synonym has sparked outrage and debate after Laxmi Basnet, a Kathmandu-based journalist, noticed this on her fifth grader daughter's book and posted it on her Facebook on Saturday.

"It's the government textbook book and the writers are two males. After I saw this in my daughter's book, I couldn't help but post the information on Facebook. I wonder where else things might be wrong! Please check your children’s textbooks and post it if you find anything odd," Laxmi posted on her Facebook wall. 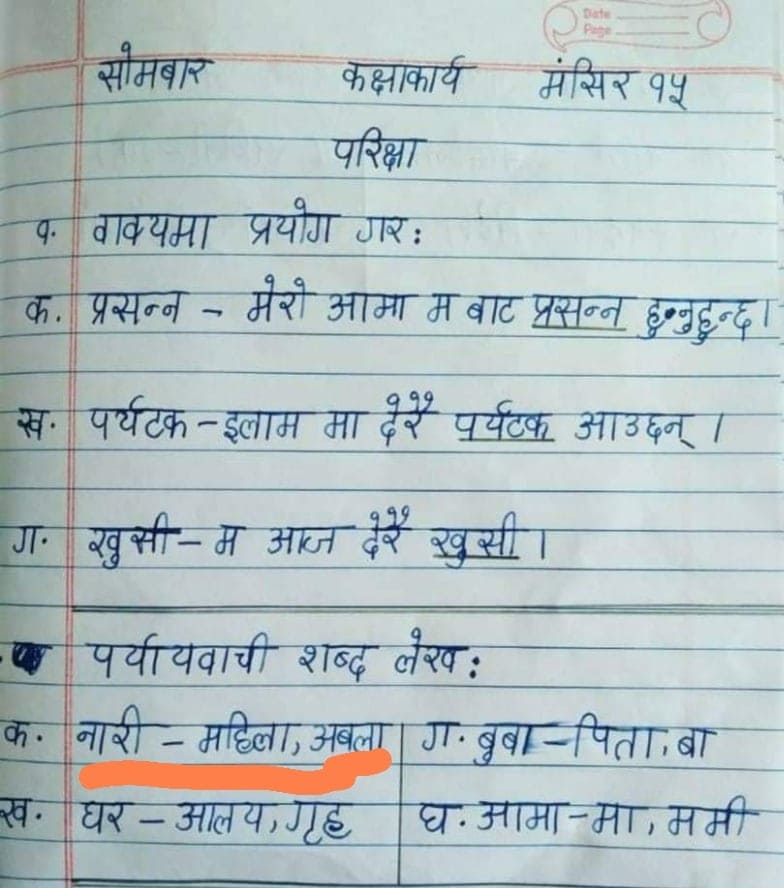 Facebook users have reacted to the post with likes, anger and sad emojis. Among those who expressed sadness and anger are basically women and activists. While women have demanded instant changes in the book and mocked the writers, comments from men are rather mild. Male commentators wrote, “Oh, they wrote the wrong thing.” “Yes, mistakes happen, we have to correct those.” Some have even stated that there's nothing wrong with the synonym.

Shrijana Singh Yonjan writes, “so good that you shared. This is atrocious. I will share it too.” Sabitri Bhandari writes, “let it be corrected without delay.” Simkhada Sunita posts, “all books written by such pathetic writers should be banned or else gender discrimination will always plague the society. Some men, rare in numbers, have however shown extreme sensitivity toward the matter.” Ram Prasad Bhattarai wrote that a synonym for a woman can never be a helpless person. "We all must pressure the government to do away with such ideas. Let's find such words if they are in other books and correct them."

JHAPA, Sept 13: At a time when Facebook is being misused, some people have taken it as a means of... Read More...

Grocery shopping, in the capital, seems to be slowly becoming a cyber affair. More and more vendors, suppliers as well... Read More...

Child goes missing in a drain in Kathmandu. Who is responsible?
23 hours ago

MCC should be passed after revising some provisions: Thapa
19 hours ago

RGTS to remain operational on Saturday
1 hour ago

Neighbor stabs a man to death
1 hour ago

Progress toward SDGs disappointing
19 hours ago