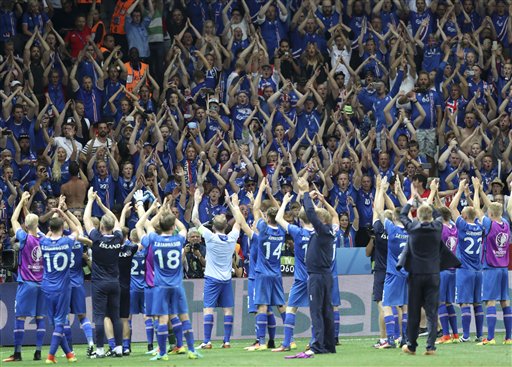 Iceland players celebrate with their supporters at the end of the Euro 2016 round of 16 soccer match between England and Iceland, at the Allianz Riviera stadium in Nice, France, Monday, June 27, 2016. (AP Photo/Claude Paris)

NICE, France, June 28: Iceland, whose population of 330,000 makes it the smallest nation ever to compete at the tournament, pulled off one of the biggest shocks in European Championship history by beating England 2-1 in the round of 16.

"This is probably going to be a day that we will talk about for the rest of our lives," said Iceland joint-coach Heimir Hallgrimsson, who runs a dentist surgery in his spare time.

Iceland's players danced and sang in front of their joyous fans after earning the biggest victory in their small nation's history. Next up is an even bigger challenge — host nation France on Sunday — but nothing may top beating England, a team Iceland always used to support in major tournaments.

As for England, the defeat meant more humiliation on the big stage and surely another inquest into why a team of supposedly talented players failed again.

David Cameron stepped down as British Prime Minister after the result of last week's referendum that unsettled the country and the whole of Europe. England coach Roy Hodgson did the same after overseeing yet another humiliating campaign in a major tournament.

"Now is the time for someone else to oversee the progress of this young, hungry and extremely talented group of players," Hodgson said. "They have been fantastic."

The England fans who jeered the team off the field at halftime and fulltime at the Stade de Nice will likely have a different opinion. This unexpected result for the country that invented the game came two years after England exited the World Cup in disgrace at the group stage.

It all started so well on the French Riviera for England, with captain Wayne Rooney putting the team ahead from the penalty spot in the fourth minute after Raheem Sterling was clipped by Hannes Halldorsson as he prodded the ball past the goalkeeper.

Crucially, Iceland struck back within two minutes through Ragnar Sigurdsson, who volleyed in at the far post after Kari Arnason's flick-on from a long throw. It is the third time Iceland has scored a goal from a long-throw routine this tournament.

For a football nation of England's standing, its record in major tournaments is woeful. The English have still never won a knockout-stage game abroad in the European Championship in eight attempts and haven't won a match beyond the group stage of a major tournament since 2006.

This defeat will probably go down as England's biggest humiliation since losing 1-0 to the United States in 1950 World Cup.

"It's embarrassing for us," Rooney said. "We know we're a better team. You can't explain it."

Hodgson harbored hopes of staying on after Euro 2016. After this exit and England's group-stage elimination from the last World Cup without winning a game, his legacy will be seriously tarnished.

"I'm a bit lost for words. Just very disappointed, upset, sad for England, Roy and us as a team," Hart said.

"We're going to have to watch this tournament through our fingers."