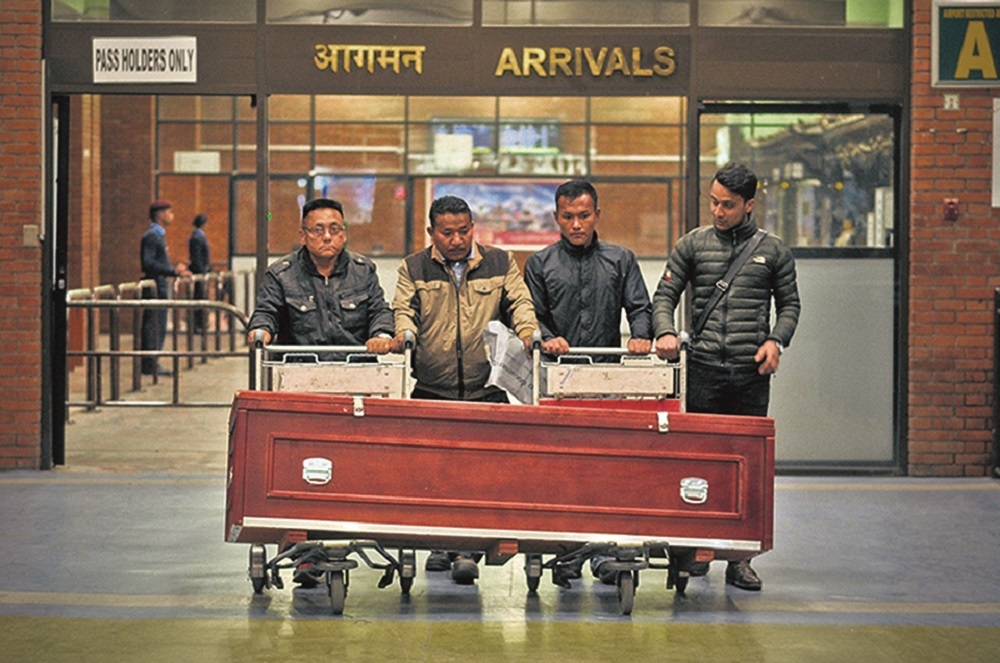 KATHMANDU, June 29: More than 100 dead bodies of Nepali migrant workers have been stuck abroad as the government has failed to bring them home. The government’s decision of providing Rs 50,000 to the family of dead ones if they opt to cremate the dead bodies in the foreign land did not work out.

Prior to COVID-19 pandemic, it used to take a maximum of three months to bring back the dead bodies. Following the coronavirus outbreak, the bodies of the migrant workers dying prior to April have been stuck. According to the Foreign Employment Board, 120 dead bodies are yet to be brought back from different countries.

Dinbandu Subedi, deputy secretary at the board, argued that repatriation has become difficult as international flights have been halted. Following the suspension of international flights, the board had decided to provide Rs 50,000 to the family of deceased if they agree to cremate the dead bodies in the labor destinations alone. 126 families so far have given their consent to perform the final rites of their relatives in the foreign lands.

Since Nepal went into lockdown on March 24, a total of 333 Nepali migrant workers have lost their lives, including 15 females. Of them, the highest number of deaths has been reported in Saudai Arabia--- with 102 deaths. Similarly, 73 others died in the United Arab Emirates, 62 in Malaysia, 48 in Qatar, 17 in Kuwait, seven in Bahrain and five in South Korea, according to the board.

Repatriation from Saudi Arabia is difficult

Bringing the dead bodies from Saudi Arabia is challenging, officials said. The Labor Act of Saudi allows to keep the dead bodies of migrant workers for more than a month, repatriation is usually late, a board staffer told Republica Online.

Many say that the government should initiate diplomatic efforts to bring in dead bodies from Saudi Arabia, as late repatriation gives immense pain to the relatives of the dead ones.

Under Secretary Subedi, however, said, “We usually ask the Nepali embassies in the respective countries, but bringing in the dead bodies of Nepali migrant workers from Saudi is time consuming.” Some government officials also argue that the Saudi government is not sincere in repatriating dead bodies. “Employers in Saudi think that they can do anything to Nepali migrant laborers,” said a board official.

According to manpower companies, Saudi Arabia is indifferent due to the weak representation of the Ministry of Labor, Employment and Social Security of Nepal. “Nepali side should be firm in labor contracts,” an entrepreneur said, adding that the families of migrant laborers suffer a lot due to the incompetence shown by the Nepali side.

The board provides Rs 700,000 as compensation to the families of the dead workers. During this fiscal year, a total of 987 Nepalis died in foreign lands, including 333 since the nationwide lockdown was enforced in Nepal.

Bringing in the dead bodies from South Korea is the most expensive. Since the employers did not agree to repatriate dead bodies to Nepal, the Foreign Employment Board has to do this job on its own expenses. It costs around Rs 500,000 to bring a dead body from Korea.

Right activists say that the government should amend the contract with the Korean government so that the job provider will have to bear the costs of repatriation of dead bodies of Nepali migrant workers.