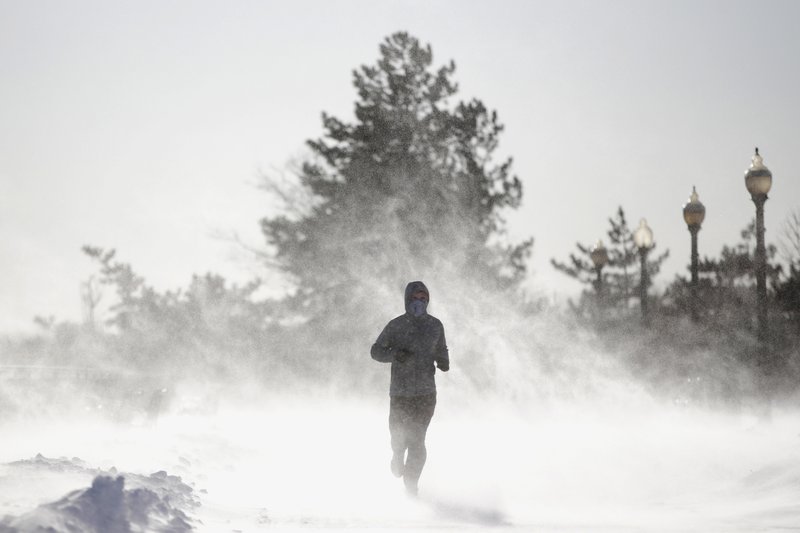 NEW YORK, Jan 7: About 100 million people faced a new challenge after the whopping East Coast snowstorm: a gusty deep freeze, topped Saturday by a wind chill close to minus 100 on New Hampshire’s Mount Washington that vied for world’s coldest place.

Jaw-clenching temperatures to start the weekend throughout the Northeast hit Burlington, Vermont, at minus 1 and a wind chill of minus 30. Both Philadelphia and New York were shivering at 8 degrees.

And in Hartford, Connecticut, a brutal cold of 10 degrees yielded a wind chill of minus 20.

On Saturday, winds of more than 90 mph swirled Mount Washington, the Northeast’s highest peak, at a temperature of minus 37 degrees and a wind chill of minus 93. It tied for second place with Armstrong, Ontario, as the coldest spot in the world.

Boston, at a relatively balmy 11 degrees, was wrangling with a different kind of challenge: a shortage of plumbers as the weather wreaked havoc on pipes that froze and cracked, Democratic Mayor Marty Walsh reported.

A 3-foot tidal surge brought on by the nor’easter along the Massachusetts coast was the highest recorded in nearly a century. Residents of Boston and its suburbs were cleaning up Saturday after the tide that came in Thursday, flooding streets and forcing some residents to be evacuate as the water started to freeze.

In New Jersey, many people stayed home instead of dealing with single-digit temperatures. Others were cleaning up from the storm that dropped more than a foot of snow in some spots earlier in the week.

“My car felt like an icebox this morning, even though I had the heat on full blast,” Julie Williams said as she sipped coffee inside a Jackson Township convenience store. She was headed to work at a local supermarket, and was expecting it to be packed.

“People think it’s nuts before a storm happens, with everyone getting milk, bread, etc.” she said, adding with a laugh, “but it’s even worse in the days afterward, because they do the same thing but they’re a little crazy from cabin fever.”

The Port Authority of New York and New Jersey, which runs the airport, said it was working with airlines and the Federal Aviation Administration to limit flights into Kennedy on Saturday “until there are adequate gates available to handle the backlog of flights due to recovery of flight schedules in the wake of Thursday’s storm.”

In Rhode Island, hospitals were treating dozens of storm-related injuries as the region grits through a deep freeze that followed a powerful blizzard.

In Providence and Newport, at least 40 people were treated for various weather-related conditions, from heart attacks, snowblower or shoveling injuries, frostbite and more, according to The Providence Journal.

The storm dropped more than 14 inches of snow on Providence.

Monday is expected to be the first day above freezing since last month. In New York City, temperatures should reach 40 degrees next week.

Even more southern locations didn’t escape the cold; the mercury dipped into the single digits in Baltimore and Washington, D.C., during the weekend, about 20 degrees below normal for this time of year.

The high winds and frigid temperatures prompted several ski resorts to close some of their lifts. Bolton Valley in Vermont said there was a general “lack of demand and enthusiasm from skiers and riders.” With a temperature of minus 14 at the summit and minus 11 at the base, the resort cancelled evening skiing due to a frostbite warning.

In Vermont’s capital city of Montpelier, with the temperature at minus 5 Saturday, business was slow at La Brioche Bakery but soups were a big seller, said bakery clerk Caroline Cunningham. “Nobody wants to be outside,” she said.

The key strategy for most East Coast residents was to wear layered clothing.

Brooklyn resident Zelani Miah, who was walking home from running errands Saturday morning, said he wore lots of them.

“Right now, the only thing I put on was just some gloves, a couple sweaters of course, like five or six of them, and two pants basically and boots,” Miah said. “Keep warm, make sure you wear hats.”

ITAHARI, March 21: Lalo Mandal, 50, of Kuswaha-4, Sunsari, who was attacked by a wild elephant that had strayed into his... Read More...