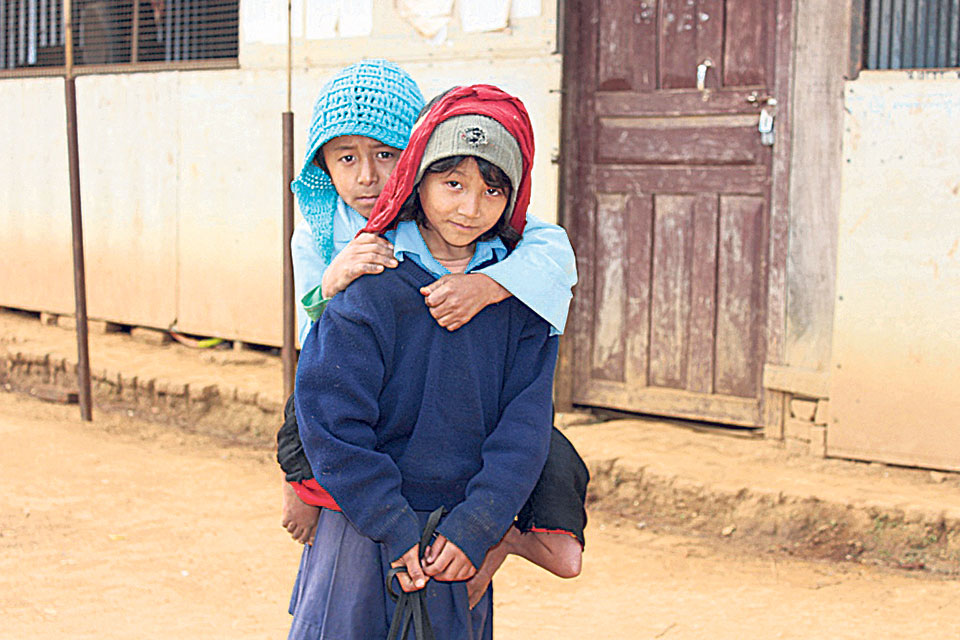 GORKHA, Jan 22: Ten-year-old Susmita Baram, a second grader at Shree Madane Danda Secondary School (SMDSS) of Palungtar Municipality-5, carries her elder brother Laxman, 12, to the school every day. Her brother is disabled and studies in the same school in grade three. Making a head strap of an old shawl, she carries her brother on her back and takes him wherever she goes.

Laxman, who was born disabled, cannot move his feet. But his desire to study has compelled his little sister to carry him to school every day. Once she leaves her brother in his class and heads to her class, his friends take care of him. Laxman needs a helper even to sit and move from his desk. Fortunately, his friends don't hesitate in helping him. They carry him to the toilet, take him to watch sports and also for lunch.

Laxman and Susmita rarely miss their classes. However, sometimes when Susmita gets ill, her brother also has to miss his classes. "As I have grown older, I cannot carry him to school every day. So, my granddaughter has to do it for her brother," said Manmaya Baram, Laxman's grandmother.

Earlier, Laxman used to stay at his maternal home but he came to live with his grandmother after his mother eloped with someone else.  According to Manmaya, Laxman is very much concerned about his studies and that's why she cannot leave him behind while going to school.

"We have done everything possible for him, from providing scholarships to other privileges but it is not possible for us to provide him shelter,"   said Rudra Prasad Upreti, principal of SMDSS. He further informed that the one who is suffering the most at the moment is Susmita.

"It breaks my heart when I see that little girl carrying her elder brother and his bag on her back," said Upreti. As the way to school is steep and rocky, both of them have to go through a lot of hassles especially during the monsoon, according to Upreti.

Both the children are living a torturous life since their mother eloped. Their grandmother has been managing two square meals for them from the little amount that their father, who is a laborer in Bhaktapur, sends. In the name of assets, all they have got is a small field.

KATHMANDU, June 25: Participants at a discussion programme here today have spoken of the need to ensure all community schools... Read More...

Government to prepare a master plan to bring disabled to school

KATHMANDU, Dec 30: The government has been working to prepare a master plan aimed at bringing the children with physical... Read More...

No COVID-19 infection on Everest Base Camp: Tourism ministry
49 minutes ago