10 schools in Doti get safe infrastructures 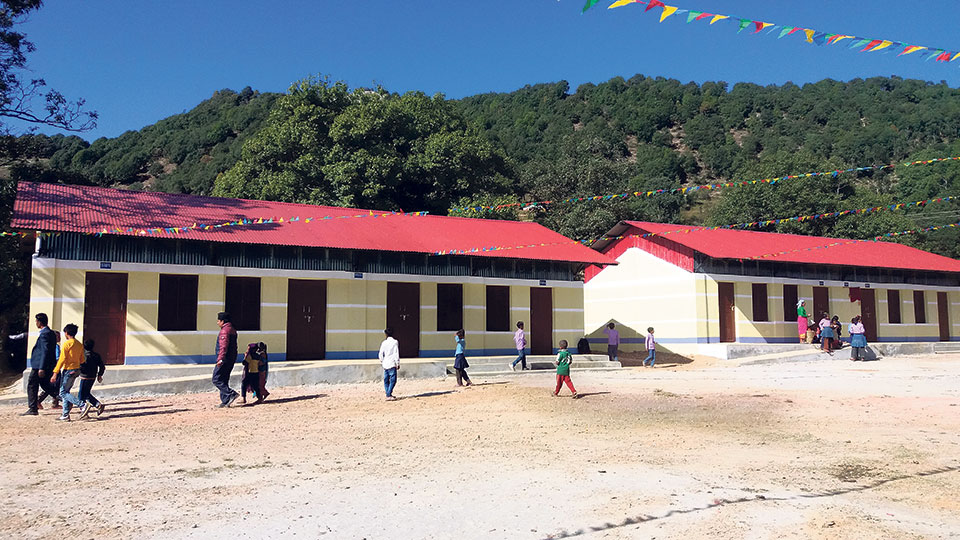 DOTI, Nov 7: Doti was among the moderately affected districts by the massive earthquake of April 2015. However it served as a wakeup call many including Arjun Khadka, principal of Mahakali Secondary School of Sayal Rural Municipality – 6.

His school’s dilapidated buildings forced him to worry for the safety of the students and school staffs. He became worried that any untoward accident could happen at any time. School buildings’ walls were fragile and water leaked through the roof.

Conditions inside the classroom were so poor that students would be unable to sit in during harsh weather conditions.

“We would send students home if the weather conditions were not favorable. After the earthquake of 2015, we all had a kind of feeling that we are not safe. Quakes could hit anytime and our buildings were too fragile to keep us safe,” Khadka stated.

He has got rid of the fear nowadays, thanks to new offices and classrooms that have been built at the school recently. Some dilapidated infrastructures were dismantled, few of them were retrofitted and some new buildings were constructed for the school.

“Our new school infrastructure is disable-friendly, earthquake resistant and attractive too,” said Khadka. “Children love to come to school, they feel safe and comfortable nowadays,” he added.

The school now has 10 classrooms, separate toilets for male and female students and a spacious office building. According to Khadka, these infrastructures were built at a cost of Rs 13.3 million.

Durga Basic School in Adarsha Rural Municipality – 4 was also conducting its academic activities in dilapidated infrastructures. Classrooms’ roof leaked during rainfall, according to Padam Rokaya, the school’s principal. “But now we are relieved. No more fear of leaking roofs, or weak walls crumbling,” he said.

New classrooms and office room worth Rs 9.1 million were constructed for the school. Some of the old buildings were demolished and new buildings were built. Along with that some were retrofitted. The school nowadays has all the basic facilities.

“Our situation was really very pathetic. Both teachers and students felt unsafe at the school. We were not able to run classes smoothly due to poor infrastructure,” said Rokaya. “We discussed our concerns with guardians and local authority. But still managing resources for new buildings was challenging,” he added.

He remembers sending kids home following rains. When dark clouds hovered in the sky, teachers would come and warn him. “And then I would announce that the school was off for the day. Children would rush home. This happened several times,” he reported. “We were teaching kids in a very unsafe place, we would feel guilty about that,” Rokaya added.

Outdoor learning was not a choice but compulsion for our school, he further said. Students would look here and there and would hardly concentrate on their studies. “We passed several years in that way,” Rokaya reminisced.

Earlier, the school did not have proper toilets too for children. Nor was there availability of water. “We knew it was important to have water and a toilet. More so for female children, but then we were in a sorry state. Now, we feel like we are really running a school,” an elated Rokaya said, adding that the school nowadays has sufficient number of toilets for both girls and boys.

The two school buildings were inaugurated and handed over to the school authorities on Tuesday by Chief Minister of Sudurpaschim Province, Trilochan Bhatta. Speaking on the occasion, he said every school should have safe buildings and added that the government is committed to work in that direction.

“Our schools are not safe. It’s very sad, and we must admit that we have largely failed our children. But we are working to change it,” he said.

The school buildings were built with financial assistance from the Japan government in association with World Vision and Community Development Center, Doti. Eight more schools in the district are going to get new such infrastructures soon.

“A total of 56 classrooms have been retrofitted, 32 newsrooms have been built. After giving them finishing touches, these will be handed over to the respective schools,” he added. He informed the total project cost is Rs 90.7 million.

DOTI, July 31: Four people have been arrested on the charge of using imposters to attend examinations on their behalf.... Read More...

When will the schools be reconstructed?

PALPA, Dec 30: The reconstruction of the school buildings damaged by the 2015 earthquake so as to shift the students... Read More...