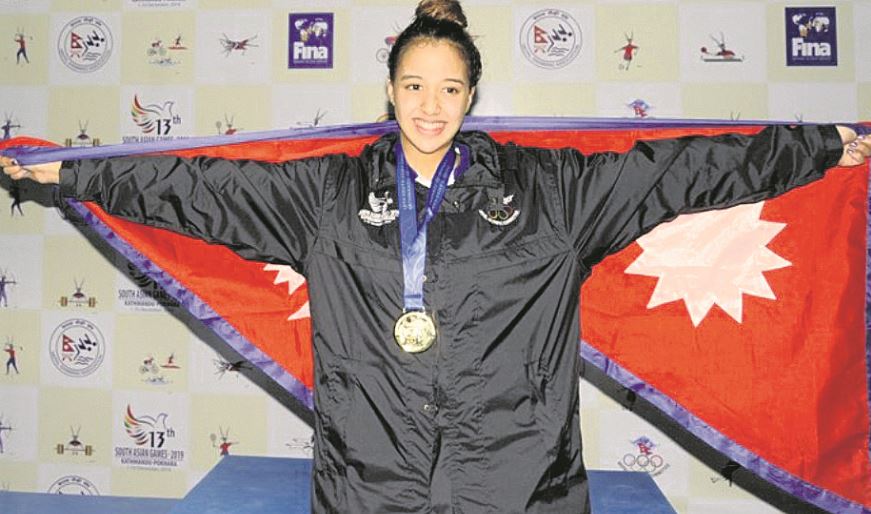 KATHMANDU, Jan 1: The decade in Nepali sports ended with a lot of ups and downs, but certainly the 51 gold medals it won in the 13th South Asian Games, that concluded December, has given a sense of belief that it could achieve similar feats in the upcoming events.

Even with the fact that Nepal had not fully constructed the Dasharath Stadium, which hosted most of the games, three weeks prior to the hosting of the games, many things can be credited. Among that is the performance of some top athletes in the games. Republica has selected 10 athletes who stood out in the games and are expected to do more of the same in 2020. 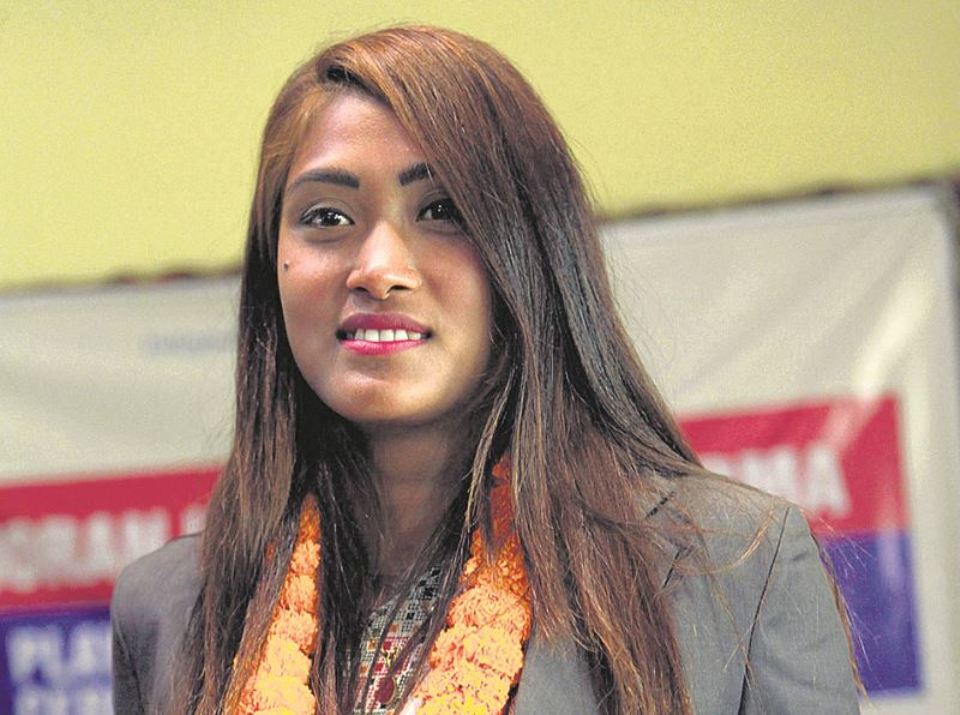 Saraswati Chaudhary was one of the prominent performers for the Nepal women’s volleyball team, who reached the final in volleyball’s tournament for the first time, but was defeated by India in the summit clash 3-2.

Before the edition, the Nepali women volleyball players had only won bronze medals on three editions with the first stretching back to 1999, and the other two in the space of 10 years from 2006 to 2016.

Chaudhary showed glimpses of a good spike performance in the semifinal against Sri Lanka with sharp shooting and kept her composure to deny the away team points to recover from an unprecedented deficit.

Chaudhary, who plays for the departmental team Armed Police Force (APF) Club in domestic level, will surely like to present some demanding performances yet again when the team competes in the New Diamond Volleyball Tournament this January. 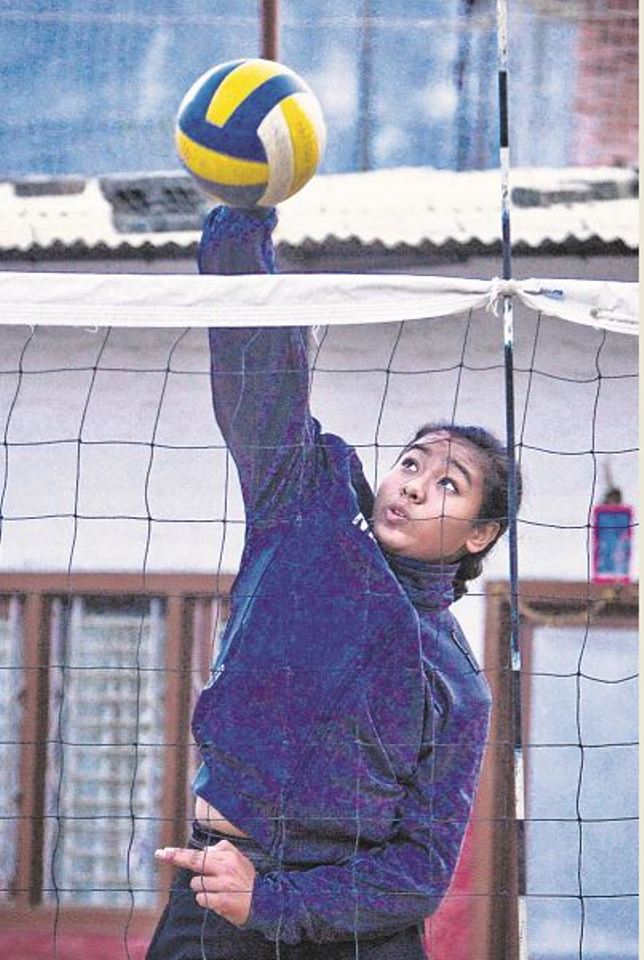 Being a part of every success Nepal enjoys, Mali has also become a key part for the New Diamond Academy volleyball team which, along with APF, dominates the Nepali volleyball.

Mali had a balanced performance in the SAG with poor performance against India overcome by a stellar display against Sri Lanka, where she was good in all spike, defense and block. She will also be competing in the next volleyball tournament. 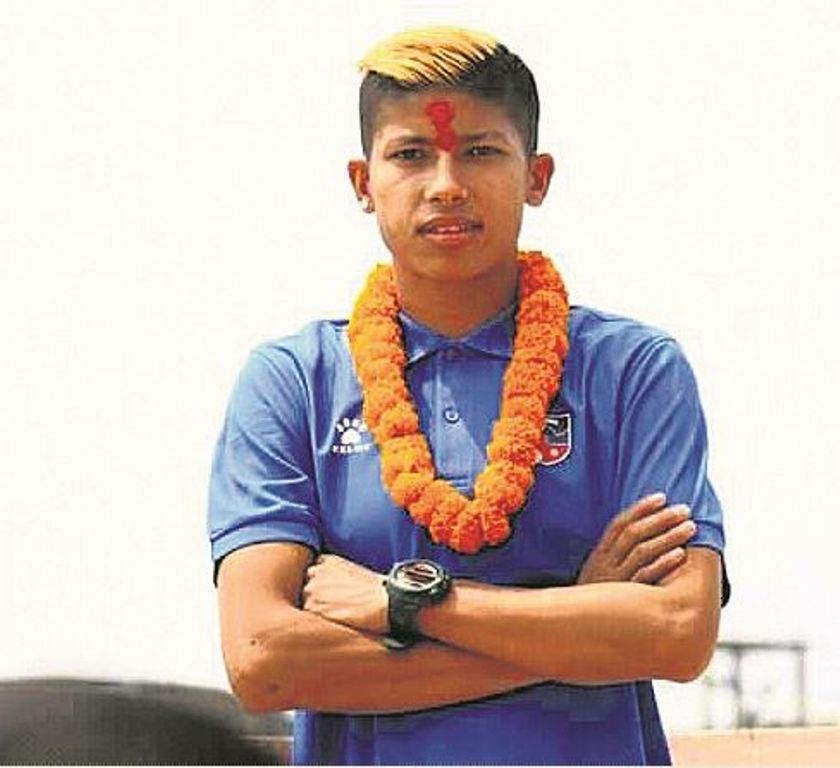 It was the same old problem for the Nepal women’s football team as it got past every other challenge, but yet again failed at the final hurdle against India.

It’s been a habit of losing against India in the final as both the teams have reached the final in SAG women’s football for three editions and all of them have been claimed by India.

Sabitra Bhandari was again in the thick of things for the team as she set a new record to become the highest goalscorerfor Nepal in international football. She scored two goals against the Maldives to overcome Anu Lama’s previous best of 35 goals for Nepal. 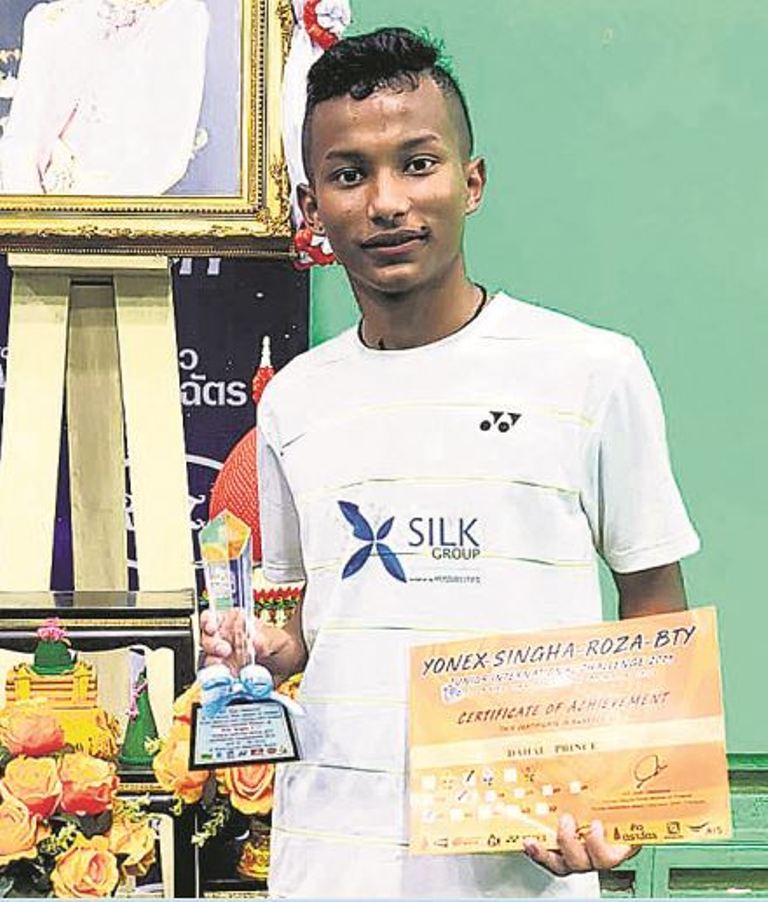 Even though Prince Dahal was not able to win any gold medal in the 13th SAG, the 16-year-old has been a regular in the face of the achievements Nepal has had in the past few years.

He has won the gold medals in both U-14 and U-15 age group categories, and the National U-14 Championship in 2016. He also stunned the then Nepal number three Bishnu Katwal in the Krishna Mohan National Open Championships in 2017.

He was decorated by the NSJF Sudur Paschim Sports Award for the male sportsperson of the year, on Tuesday. 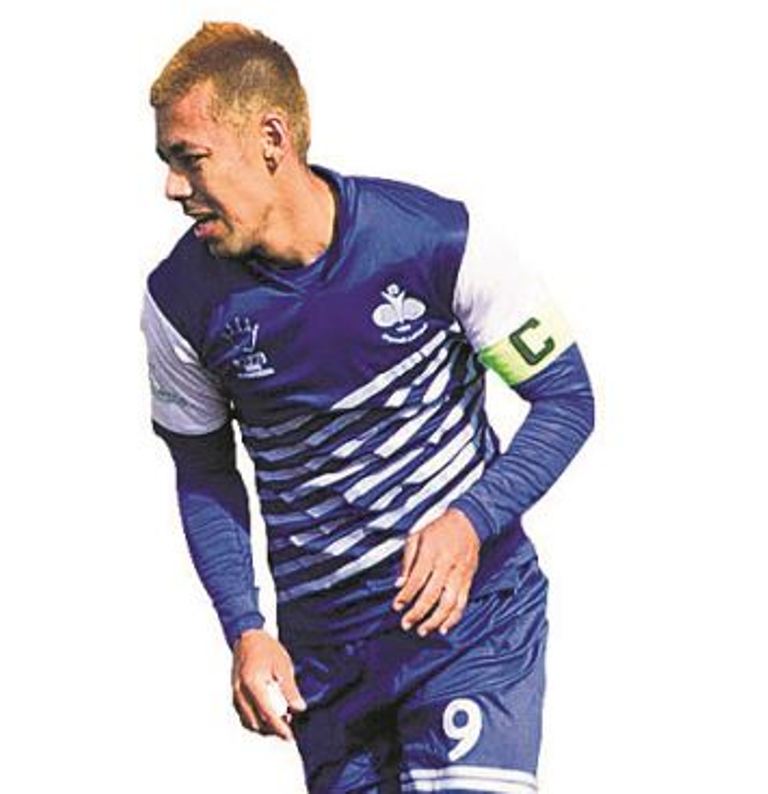 Despite the fact that Santosh Shahukhala was not included in the squad for Nepal’s gold medal win in men’s football, the former Three Star Club and Manang Marshyangdi Club player has certainly more to offer in the Martyr’s Memorial A-Division League this season.

Santosh, who is coached by elder brother Bal Gopal for Chyasal Youth Club, has bagged a total of 99 career goals in league football. Despite the fact that he has not been able to score for two matches in a row, he can still break the record as Chyasal has still nine matches left to play.

He scored a goal in a 1-1 draw against Machhindra Club to take his tally to 99. 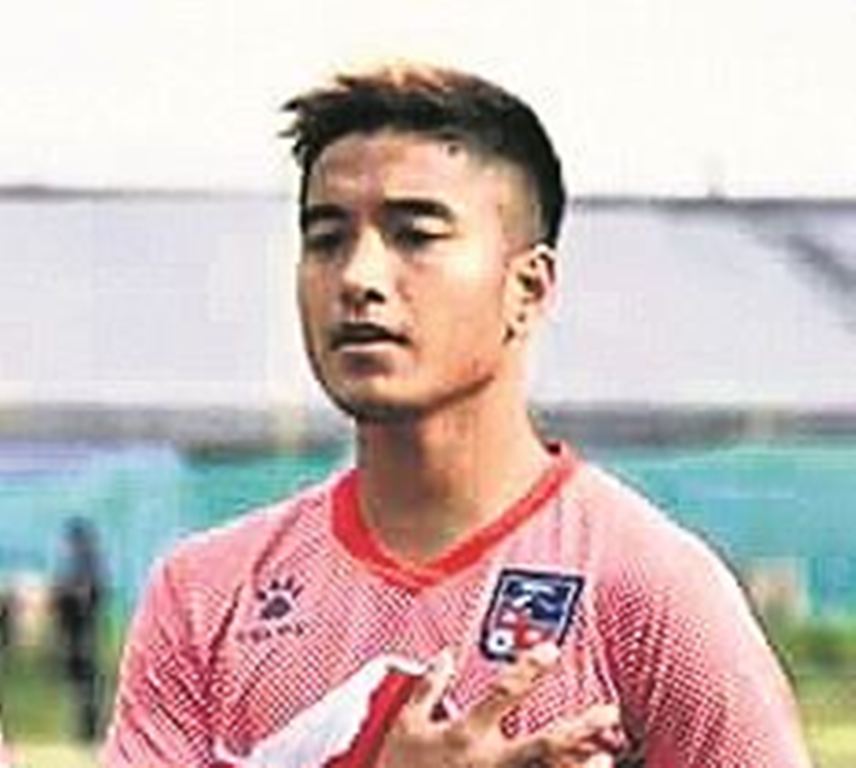 Abhishek Rijal has been climbing the stairs of Nepali football every year. With just one start by Nepal head coach Johan Kalin until August, he was part of fringe players like Bimal Rana, Rejin Subba and Bimal Gharti Magar playing ahead of him.

With the performance in the SAG this edition, one can expect to see Rijal in the Nepal squad in the coming days. He now plays for Machhindra Club in league football and has been a bright figure as the club hopes to overthrow Manang in the league, but is still behind the defending champion. 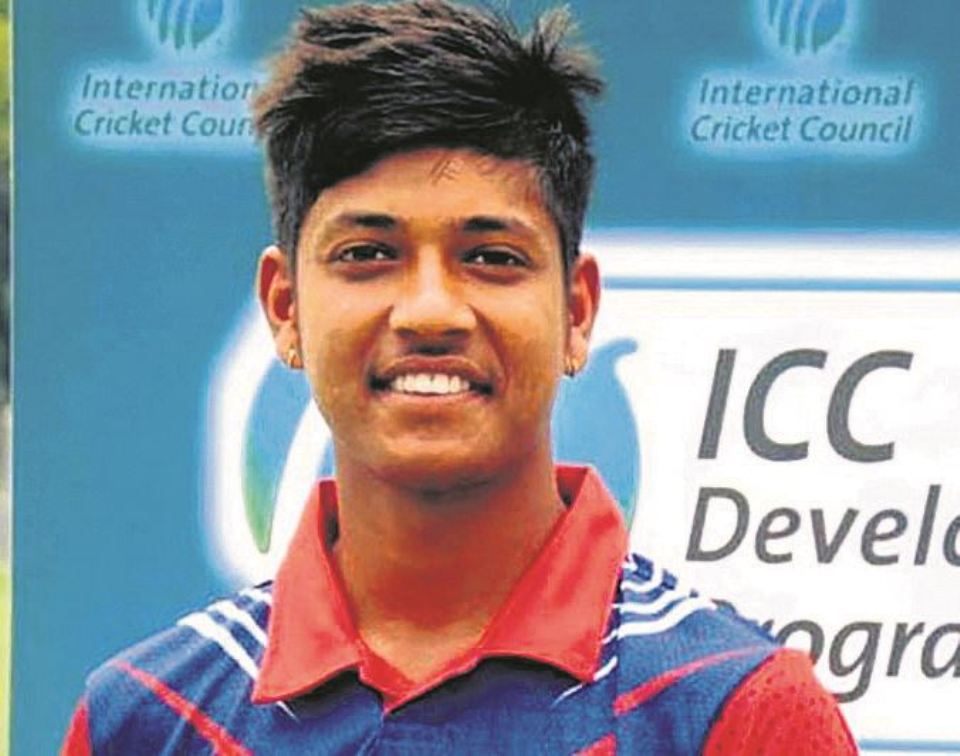 The 19-year-old leg-spin starlet has not looked back ever since taking hat-trick against Ireland in the ICC U-19 World Cup held at Bangladesh in 2016. He went on to be prominent member of national team and played in the Indian Premier League and various other lucrative premier T20 leagues in the world. He was recently picked by “The Hundred” franchise, Oval Invincibles, for the upper ceiling of GBP £100,000 in the player draft. The Hundred is the England and Wales Cricket Board’s new 100-ball tournament, which will be played in July – Aug 2020. There is no stopping the leg-spinner who looks destined for big things not seen in Nepali cricket before. He already has baggged lucrative contracts from IPL, Big Bash League team Melbourne Stars and the Caribbean Premier League. The highest wicket-taker in T20Is in 2019 will look to grow stronger in 2020. 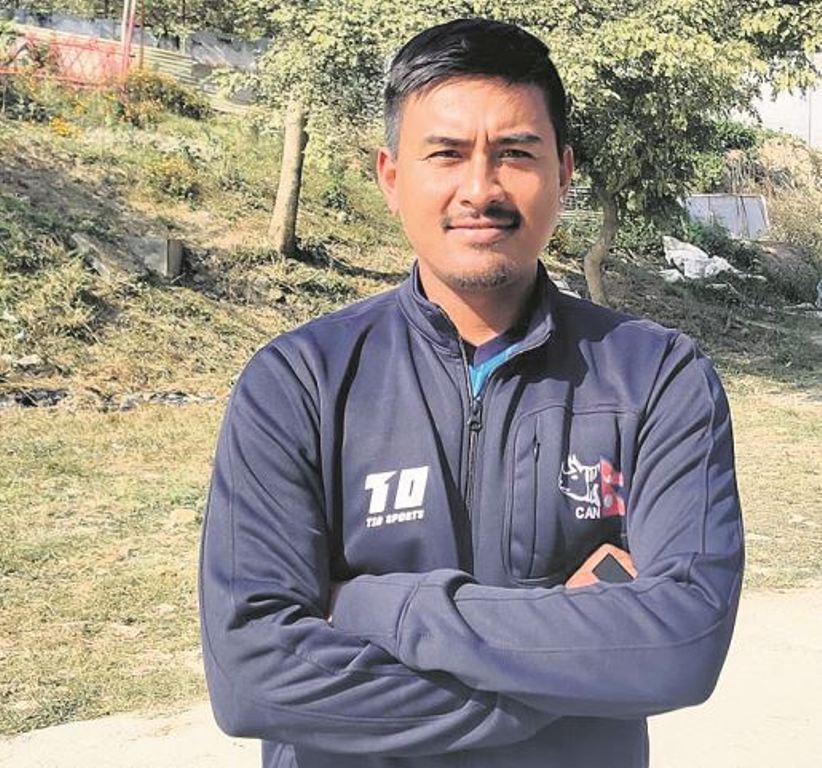 Gyanendra Malla, the newly appointed captain of Nepal national cricket team after the abrupt resignation from former captain Paras Khadka, has hit a purple patch of sorts in his recent outings. A T20I century against Bhutan in front of home crowd, again only second after Khadka’s T20I century against Singapore, was followed by a breathtaking 37-ball century against Expert Dhangadhi Blues in the Pokhara Premier League, Malla has been adding up runs like never before in his career. He dedicated both the centuries to his newly born daughter. The added responsibility has brought out the best out of him. Now, fans will be hoping to see positive results with the national team as well. It can be a year to remember for long time vice-captain who turned full-time captain at the tail-end of 2019. Dhami dedicated her medal to her coach and her mother and vowed to bring glory for Nepal in the event. 19-year-old Dhami in her first international match was in tears after the historic win. This at a time when many female athletes are bringing attention and glory to Nepali sports in the last year or so, Dhami is another young name who can carry Nepal’s emblem in various international events.

The rise of Gaurika Singh was evident in 2019 as well as she became the first Nepali swimmer to win four gold at the 13th South Asian Games held in December. Gaurika become the only player to have won four golds in the same edition of the regional sporting event. She equaled the record set by Deepak Bista.

She keeps improving on her national record by each national event. Defeating the likes of her Indian counterparts means that the expectations will continue to grow from Nepali observers of the sport. Gaurika won a total of 4 golds, 1 silver and 2 bronze in the 13th SAG. She was the major contributor in Nepal’s historic medal tally in the 13th SAG.

Swimming started as a good health goal for her and now she carries the national emblem on the world stage. She has now ignited Nepal's medal hopes in the Asian Games and the Olympics as well .

With the South Asian Games (SAG) over, it is high time we reflected on the achievements of Nepal and started... Read More...