10 families displaced by landslide, 20 at high risk in Sindhupalchowk 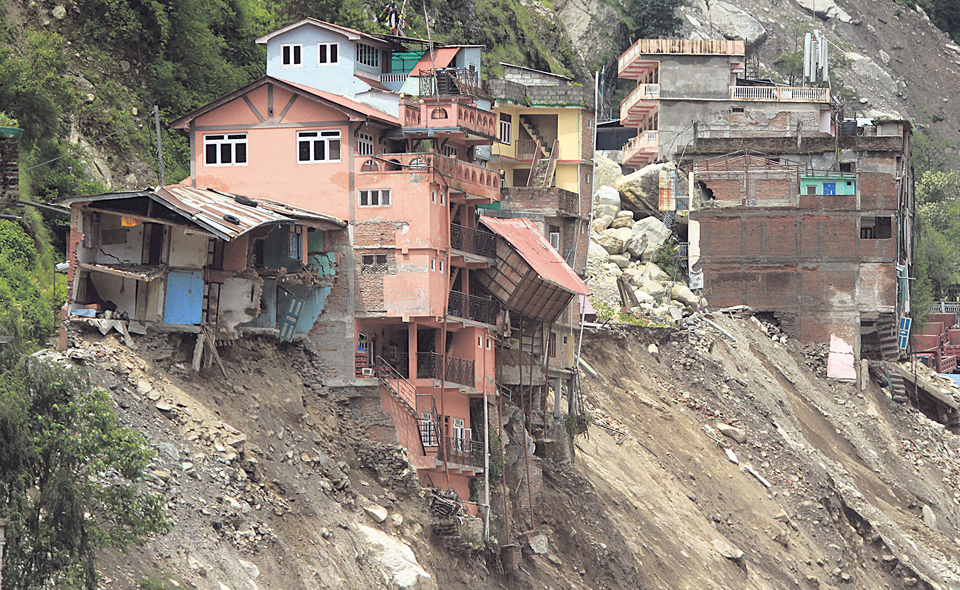 SINDHUPALCHOWK, Sept 14: A total of 10 families at Chaukidanda of Tatopani, Bhotekoshi Rural Municipality-2 in Sindhupalchowk district have been displaced by the landslide that occurred a few days ago.

Moreover, as many as 20 households in the locality have been risked to the landslide triggered by incessant rain. A huge rock fallen off the cliff along with the landslide debris has been stuck some yards away from the human settlement here, leaving the locals here frightful.

The families of Sangi Sherpa, Kalu Tamang, Nurpu Sherpa, Nimgmar Sherpa and Gem Bahadur Gurung among others have fled to safety following the incident. Bhim Bahadur Magar, one of the survivors, said that they shifted to Tatopani Bazar to save himself and his family.

Bhotekoshi Rural Municipality Chairperson Raj Kumar Poudel informed that those families at risk were asked to relocate themselves to safer places. The rural municipality is also expecting some support from the Disaster Management Committee to address the issues of displaced families.

The families have been staying as landless squatters for long. They have been residing in the public land since they were hit hard by a flood in 1981, Gorkha Earthquake in 2015 and flood in Bhotekoshi River in 2016.

Chairperson Poudel said that the situation has been brought to the knowledge of Province No 3 government and the provincial government has been prodded for management of landless squatters at risk of landslide.

SINDHUPALCHOWK, Sept 1: With one more dead body recovered from the landslide debris on Tuesday morning, the number of people... Read More...