1,221 people go down with diarrhea in Dang in two days 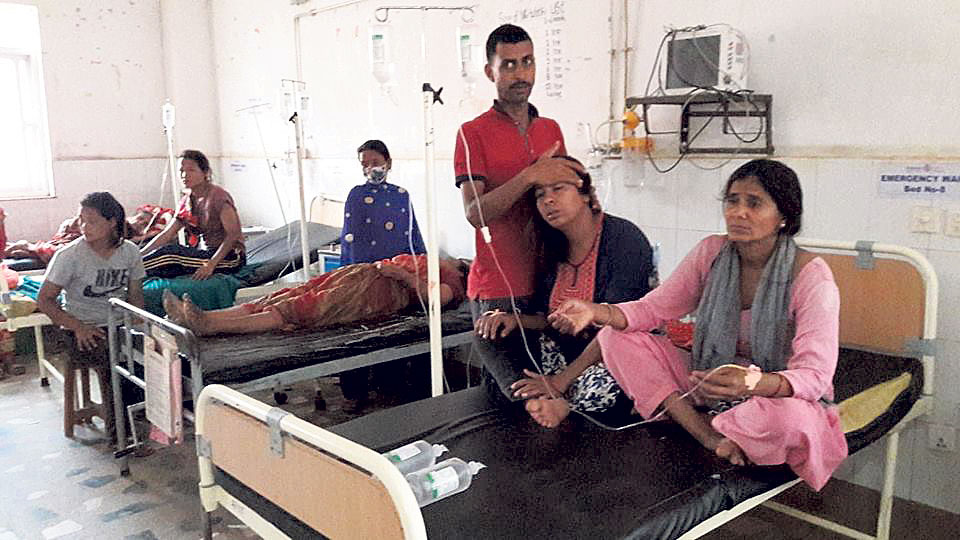 Diarrhea patients undergoing treatment at the Shantinagar Health Post in Patetakura of Shanti Municipality in western Dang on Sunday.

DANG, May 28: More than 1,200 people of Patetakura of Shantinagar Rural Municipality in western Dang have been affected by an outbreak of diarrhea since Saturday, apparently due to the consumption of contaminated water.

As per the details provided by Shantinagar Health Post (SHP), 1,221 patients had come to health post for treatment by Sunday evening. Most of the patients are women. The patients have been suffering from vomiting and diarrhea. However, the outbreak has not claimed any life so far.  “The number of patients is continuously rising but fortunately no one has died so far,” said Hari Pun, chief of SHP.

As many as 419 patients had reached SHP for treatment until Saturday evening. But the number of patients doubled in less than a day with the addition of 802 new patients on Sunday. According to Pun, the condition of the patients who were admitted on Sunday is critical. Two of the patients in serious condition were referred to Nepalgunj for further treatment.

Contaminated drinking water distributed in ward 3 and 4 of Shantinagar has been blamed for the outbreak. The District Public Health Office (DPHO) has demanded for testing the quality of water to find out the reason behind the epidemic.

“It seems that the epidemic started after the consumption of contaminated drinking water,” said Ghanshyam Pokhrel, chief of DPHO. “We have already collected the sample and it will soon be tested in a lab,” he added.

Despite suspecting that the polluted water could have led to the epidemic, locals are still using the same water. According to Kaman Singh Dangi, chairperson of Shantinagar, the locals have no option to drinking the same contaminated water. “But we have suggested them to boil the water before drinking,” said Chairperson Dangi.

Earlier, Mailipani was the main source of water for the residents of ward no.3 and 4.  But the locals were provided water from a new source after the shortage of water in Mailipani. This time, water was directly filled in the drinking water tankers without any purification. Later, this water was directly sent to the water taps. This has been suspected to be the reason behind the outbreak.

KATHMANDU, Sept 26: So far 190 thousand people have left their homes for the Dashain celebrations. ... Read More...

Two killed in house collapse in Doti
12 minutes ago

Ruby Khan and govt strike deal, probe panel to be formed
22 minutes ago