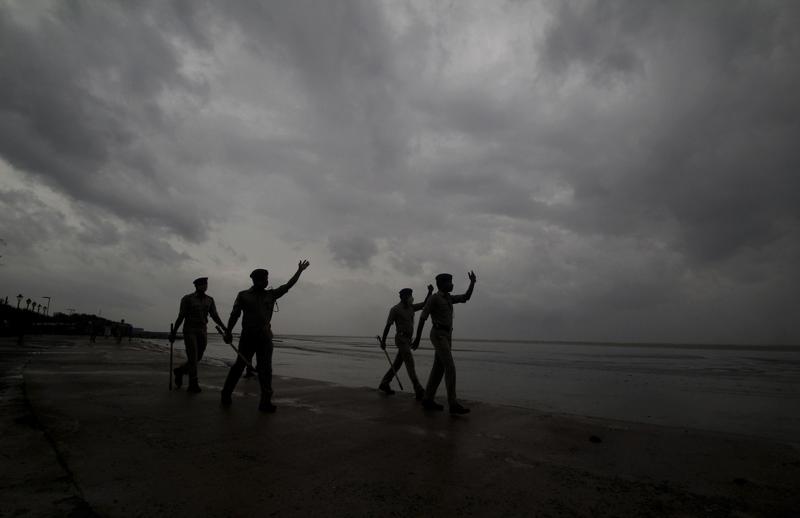 Policemen ask people to move to cyclone shelters as they patrol a beach in Balasore district in Odisha, India, Tuesday, May 25, 2021. Tens of thousands of people were evacuated Tuesday in low-lying areas of two Indian states and moved to cyclone shelters to escape a powerful storm barreling toward the eastern coast. (AP Photo)

NEW DELHI, May 26: More than 1.1 million people have evacuated low-lying areas before a cyclone hits part of India’s eastern coast around midday Wednesday.

Cyclone Yaas has already caused two deaths and damage to homes as severe weather and rains affect Odisha and West Bengal states. It is due to make landfall around noon.

The “very severe cyclonic storm” has sustained winds of 130-140 kilometers per hour (up to 87 mph) that are gusting up to 155 kph (97 mph), the India Meteorological Department said on Wednesday.

Kolkata airport is shut until 8 p.m. and train services were canceled before the storm as a precaution, the railroad department said.

The cyclone has dumped more than 17 centimeters (6.5 inches) of rain in Chandabali and Paradip regions of Odisha state since Tuesday, the meteorological department said. Tidal waves of up to 4 meters (13 feet) are likely to flood some low-lying areas.

At least 20 districts in West Bengal state were expected to feel the brunt of the storm. Fishing trawlers and boats were told to take shelter.

The cyclone coming amid a devastating coronavirus surge complicates India’s efforts to deal with both after another storm, Cyclone Tauktae, hit India’s west coast last week and killed more than 140 people.

Odisha’s chief minister, Naveen Patnaik, appealed to people being moved to cyclone shelters to wear double masks and maintain social distancing. “We have to face both the challenges simultaneously,” Patnaik said.

A year ago, the most powerful cyclone in more than a decade hit eastern India. Nearly 100 people died in Cyclone Amphan, which flattened villages and destroyed farms in eastern India and Bangladesh.

“We haven’t been able to fix the damage to our home from the last cyclone. Now another cyclone is coming, how will we stay here?” said Samitri, who uses only one name.