10 places to visit in Nepal: Choose your destination

Single step for A thousand-mile journey

Harvey Weinstein, an American film producer, was recently fired from his own production company -- The Weinstein Company and the Motion Picture Academy after being mired in controversy following allegations of sexual abuse.

Two decades ago, Weinstein had invited Ashley Judd to the Peninsula Beverly Hills Hotel for what the young actress expected to be a business breakfast meeting. Instead, he had her sent up to his room, where he appeared in a bathrobe and asked if he could give her a massage or she could watch him shower, she recalled in an interview.

After being confronted with allegations, including sexual harassment and unwanted physical contact, Weinstein is said to have reached at least eight settlements with women.

Following the lash this caused both in Hollywood and the American social media users, the hashtag #MeToo started trending on social media after actress Alyssa Milano asked victims of sexual harassment to come forward and let their voices be heard on Twitter. She expressed in her tweet that this idea was inspired by her friend who had said “If all the women who have been sexually assaulted wrote ‘Me too’ we might give people a sense of the magnitude of the problem.”
The trend eventually spread through the entire world like a wildfire, with women posting #MeToo on social media to show how routine sexual assaults and harassments were. The hashtag is being used to express that they had been victims of such misconduct at some time of their lives.

The hashtag has been used over three million tweets on Twitter and seven million posts on Facebook as of now.

Various celebrities worldwide followed the trend by coming out and expressing that they too had suffered from similar assaults and harassments throughout their careers. The hashtag has been used over three million tweets on Twitter and seven million posts on Facebook as of now.

The trend has also caused ripples in South Asian countries like Nepal, where it is considerably harder for women to come out and express the incidents of sexual harassment they had to endure. Women in our country live in constant fear of being bashed by the society if they uncovered their sufferings. However, thousands of women including celebrities and commoners have spoken up and shared being sexually abused.

Seeing every other woman, be it your friend, family or a coworker, write #Metoo to voice their suffering defiantly shows how commonplace sexual assault and harassment are, be it at home, on the streets or in the workplace.

Million of women across the world have been sharing their experiences of sexual harassment and abuse in an online campaign using the hashtag #MeToo on Twitter and with rolling posts on Facebook.
The social media meme was sparked by ‘Charmed’ actress Alyssa Milano on Sunday, who asked her followers to reply “Me Too” if they had ever been sexually harassed or assaulted.
It was a reaction to sexual abuse allegations against film mogul Harvey Weinstein, who has denied having non-consensual sex with anyone.
Milano’s original tweet received over 37,000 comments, and the hashtag was one of the top trends on Twitter in Britain and the United States. On Facebook, around 7 million people were discussing “Me Too” on Monday afternoon.
“I’ve lived through it and way too many others have as well,” Twitter user Concertange wrote of the issues raised by the trend. “It’s not okay and it needs to be taken seriously and needs to stop happening.”
Among big entertainment industry names to take part were ‘Artpop’ singer Lady Gaga, Oscar-winning actress Anna Paquin and ‘Westworld’ actress Evan Rachel Wood, who described being raped by an unnamed individual.
Some men who said they were also victims of sexual assault took to the social media to share their stories, including one of the stars of Broadway musical ‘Hamilton’, Javier Munoz.
“I don’t know if it means anything coming from a gay man, but it’s happened. Multiple times,” he tweeted.
In France, where prevalent sexism has regularly triggered calls to end a code of silence, journalist Sandra Muller, sparked a similar outpouring of sharing under the hashtags #balancetonporc and the phrase’s English equivalent, #squealonyourpig.
Radio journalist Anais Dent was one of those sharing her story, writing: “First journalism internship in Paris, I was 18. The editor in chief kisses me against my will. He’d just had a baby. #balancetonporc.”
In a sign that tolerance of such acts is receding in France, on Sunday President Emmanuel Macron said he had started proceedings for Weinstein to be stripped of his Legion d‘Honneur, France’s highest award.
A number of women have said Weinstein sexually harassed or assaulted them in incidents dating back to the 1980s. The New York Police Department has said it is investigating a 2004 allegation of sexual assault by Weinstein.
Reuters has been unable to independently confirm any of the allegations. 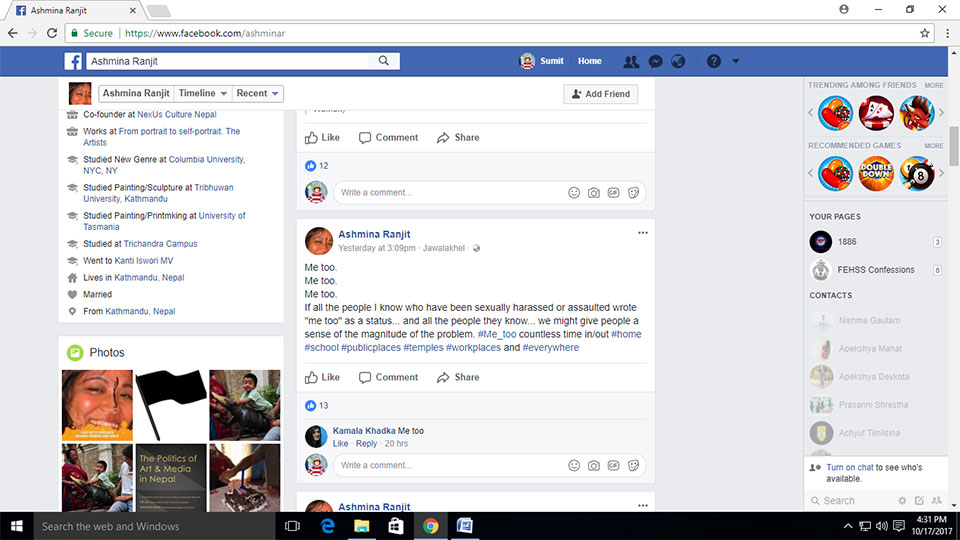