Washing clothes are probably the most tedious work. Since there is nothing so exciting about it, we keep postponing this task for later. The Nepali logic behind the delays in this tiresome activity is spot on; lack of water. Doing the laundry in winters is even more painful. Once a while you gather all your courage and dismantle the piled clothes. You are ready to clean them up, only to realize that you are short of water for the day. It’s really tiring. Washing machines have solved this woe to an extent. But not everybody has a washing machine. What would be the best way out to do away with your laundry? Thankfully, there are start-ups like Washmandu that answers all your laundry worries.

Washmandu is a Kathmandu based online laundry service founded by Mrigendra Karn in 2017. To make things simpler, they also provide free pickup and delivery facilities. Since its inception, this brand is trying to solve Kathmandwuite’s laundry problems.

You can place the washing order on Washmandu’s website or by phone calls. While placing an order, they ask you the type of cloth, service (Wash and Fold or Wash and Iron), total number of clothes to be washed, basic personal information, pick-up date, time slot and address. The price depends on the quantity of clothes. According to Karn, “The minimum price to wash clothes begins from Rs 120 /kg. If somebody wishes to use the ironing facility, additional 30 rupees is charged. Likewise, the cost of washing a blanket is Rs 100 a kg. Additional 50 rupees is added on every kilogram added.”

Informing on the additional delivery charges, Karn replied that they charge neither for the laundry pick-ups nor on delivery.

Initiation story
Karn, the founder of Washmandu, was also a Chartered Accountant (CA) student. He says, “I have always wanted to run my own business. After quitting CA, I thought it was finally a time to do something that will help people in their daily lives.” He says that his personal laundry nightmares led to initiating the concept. “I personally went through this problem. That’s the reason why I came up with the idea of online laundry service,” added the founder.

Washmandu now has over 10 employees (two for delivering) with their own company motorcycles.

Challenges
Despite a new and young business, the hurdles are there. According to Karn, the main problem lies in the context of washing. Adding more to it, he states, he adds, “Basically, the difficulty is in the quality of clothes that we receive. Sometimes, the clothes are messed up pretty badly because of inferior fabric quality.”

“Sometimes it’s also hard to be there on time; either for pick-up or delivery”, says Karn. “The roads of Kathmandu can’t be trusted. We go to pick-up and deliver on time, but traffic jam is a major challenge.” He adds

Like in the majority of businesses, worker’s instability is also a pertinent issue at Washmandu. “I think it’s a universal problem,” comments Karn.

Overcoming and goals
Karn takes the hurdles to be his source of learning. He shares, “Well, the company may be at its prime, or just be a new startup, these problems are there. They have been around for quite some time now. The best solution is that we (Washmandu) try to tackle the obstacles slowly and one at a time, if possible. We had a problem in tagging clothes but thanks to the videos and blogs on the internet, we have successfully overcome that.”

Washmandu wants to be more efficient in the coming years. They want to increase the number of clothes and blankets in their work. “Currently, we wash over 1-2 kg in a day; be it clothes or blankets. However, we wish to increase the quantity of clothes we wash to more than 150 kg clothes in a day.” 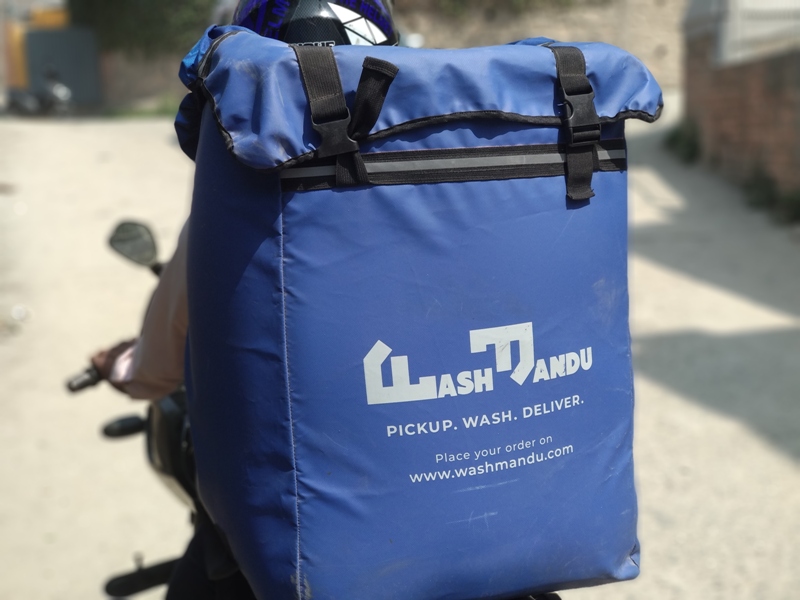