Czech Republic is now home to the longest pedestrian suspension bridge in the world which is called Sky Bridge 721! The 721 m (2365 ft) long bridge is a part of a mountain resort named Horský resort Dolní Morava in the country. Built at an altitude of more than 1100 m (3610 ft) above sea level, the bridge has become the latest tourist spot in the nation. 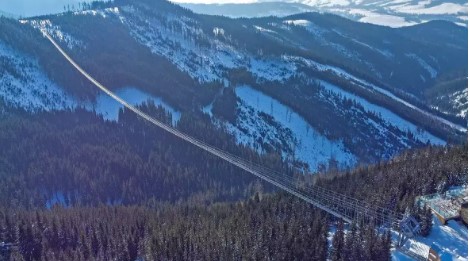 The pedestrian bridge links two ridges of the mountains and hangs up to 95 m (312 ft) above the valley below. It is situated in the Northeastern part of the country in the Kralicky Sneznik mountain range close to the Poland border.

From here, people can enjoy stunning views of the surroundings. It’s a perfect spot for those who enjoy heights. As of now, only 500 people will be allowed to be on the bridge at any one time. However, if the speed of the winds reach 135 kph, the bridge will be closed immediately for the safety of tourists.

It took nearly two years and 200 million Czech crowns (USD8.3 million) to complete the construction work of the bridge. But one group believes that the bridge is too big for the surrounding environment, and some say that it will draw tourists to the town, which has a population of less than 500.

As per Czech Tourism, the bridge is an asset that could attract tourists from across the world. Before this, the record was held by Arouca in Portugal. The bridge there is 516 m (1693 ft) long.